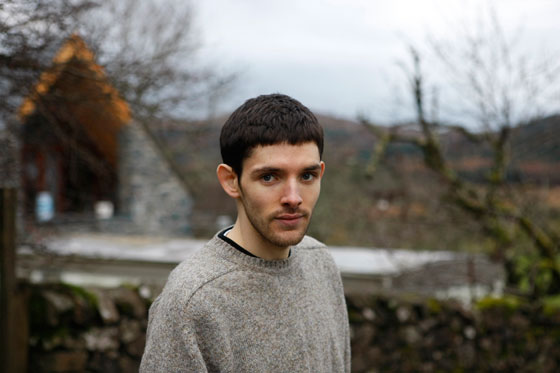 As the newest member of the PopGurls crew, I thought that writing about things that interest me (and the readers of course!) would be a good place to start. Currently, my favorite show at the moment is BBC’s Merlin. Specifically, my favorite character isâ€¦well, Merlin and is played by the young Irish actor Colin Morgan who I’ve had the pleasure of chatting with on a few occasions. A self-confessed workaholic, Colin found the time to film not one, but two indie flicks — Island and Parked while on hiatus from the hit series.

Both are beginning to make their way around the film fest circuit and the former looks truly breathtaking, being filmed in Mull, Scotland. The location is a character in and of itself, helping the audience fall headfirst into a story that is half myth and half sinister mystery.

Based on the book by Jane Rogers, Island follows the life of Nikki Black (Natalie Press), a young woman who was abandoned at birth. Lost in the foster system and shuffled from home to home, her only method of escape were fairytales. But the longterm effects of being constantly “abandoned” render her incapable of feeling love.

Eventually, she decides to find her birth mother — without revealing her true identity, Nikki finds Phyllis on a remote island and discovers a half-brother, Calum (Colin Morgan), the child Phyllis kept. Driven by fear and a need for revenge, Nikki decides to take her mission on a decidedly darker turn.While plotting her mother’s demise, she awakens to the magic of the island, her intriguing, and somewhat dangerous, brother and their shared passion for storytelling.

I’ve started reading the novel so I can tell how it was translated in film; so far, Nikki is pretty messed up and I’m only within the first couple of pages! It’s a welcome change seeing Morgan in a role that is such a departure from Merlin; from what I’ve read about the book, there’s a very disturbing scene that I’m intrigued to see on-screen. From the trailer below, the scenery incredibly beautiful and the tale haunting:

Keep an eye out for more Island — AND Colin — on PopGurls this year!