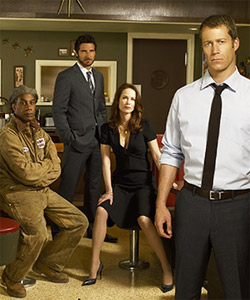 The premise of Eureka is that, once upon a time, Einstein and Truman made a secret deal to build a town where the world’s awesomest scientists would all live, breed, collaborate, and build Weapons of Mass Destruction in an underground bunker beneath what appears to be stock footage of the J. Paul Getty Museum in Los Angeles. Of course, this all leads to wacky hijinks and the liberal use of the word “quantum” to describe every potentially world-ending mishap that of course is want to occur in the small town.

I watched SCI FI Channel’s two-hour pilot Eureka with a real-life physicist who just earned his PhD from Caltech who explained all this “quantum” business to me: “It sounds like science, I guess.” My PhD friend then attempted to explain the first law of thermodynamics to me, but I can’t remember any of it because I’d rather believe that a magical hamster on a wheel makes the universe work.

Eureka’s town square features a fountain/sculpture of Archimedes in the bathtub. Get it? No? Archimedes was a Greek mathematician who discovered that one could measure weight or volume through water displacement while doing whatever the Greeks did in the bathhouses. When he lowered himself into the bath, he saw the water rise up over the sides and exclaimed, “Eureka!” which in Greek means, “I found it!” I’m skeptical that Archimedes was talking about water displacement when he made his famous exclamation. I’m certain that men exclaimed, “Eureka!” at a regular clip underwater at the bathhouses for reasons that have more to do with slash than science. (Please send your Archimedes slashfic to me in care of the PopGurls, thanks.)

Unfortunately, the small town of Eureka seems to have little else in common with the Greek bathhouses of yore, except for the part where its lead actor, Colin Ferguson, appears naked, running through a Bed & Breakfast, loosely draped in a toga-like bed sheet.

Ferguson plays U.S. Marshal Jack Carter, the manly everyman who is just passing through the quantum town on his way back to Los Angeles when he blows a tire trying to avoid a quantum dog standing in the middle of the quantum freeway. Of course, a bizarre series of quantum events occur that demand his attention, and he ends up with a gig as the local sheriff in a serendipitous series of more quantum events.

I spoke with a very sleep-deprived Ferguson after an all-nighter of filming the last bits of his new series. Ferguson was last seen in primetime for about three minutes on the US version of Coupling as Patrick Maitland. He has no sour feelings about the quickly-canceled remake of the British hit comedy. “It was only ever a positive thing, it was a huge stepping stone for me and I’m grateful for it.”

The actor is best described as pathologically charming. I’ve had the pleasure of meeting him a few times and have observed that he’s genuinely engaged by everyone around him, remembering the tiniest of details and asking follow-up questions about conversations long past.

Ferguson’s acting career began as a horrific public speaking requirement he had to do to get credit in order to graduate from his high school in Montreal. “I was problematically shy, and I had to do this speech in front of the whole school in order to get my high school diploma. The only way to get through it was to make it funny.”

He was so funny that he was sent off to represent his high school in public speaking at a competition in Boston, Massachusetts. He won that, and went on to represent his school in the United Kingdom. “It was profoundly uncomfortable,” he says. “But I kept winning, so I kept going.”

Ferguson eventually tried out for a comedy troupe for McGill Improv in Montreal. “We were auditioning him with a woman who was terribly nervous,” says his longtime friend and former manager of the comedy troupe, Ita. “He went with her, low, flat, quiet. And then he added pathos. Somehow, he was breaking hearts. And boom! Funny again. Apart from taking his clothes off, that was one of his trademarks. Sincere pathos, and then accelerating right into comedy with a sharp left turn…raw kid of 18, who could manipulate emotions better than I think he understood.”

Colin doesn’t own a television. I always think people who don’t own televisions are weirdly pretentious. “No, no, it’s not anything pretentious,” Colin assures me. “I used to lose so many hours everyday getting sucked into it.” When I’m not watching television, I’m writing about television, so I understand the time-suck he describes.

I also understand being the everygirl in a world of quirky scientists. Like Superman, I have a day job, and that job is as a mild-mannered secretary in a laboratory filled with scientists and engineers of amazing talent. They have big, fat juicy brains and sometimes wander the halls in confused states of brilliance, and my job is to save them from themselves by gently tucking them back into their cubicles and assuring them that I will make their bureaucratic nightmares go away.

I love them, but I find that distance makes the heart grow fonder, and so I live four cities and three freeways away from them. It’s best that we don’t know anything about each other’s personal lives, and that they picture me as a wee paperwork elf who sleeps under my desk and magically appears in a new outfit each day at nine o’clock. Living in (the fictional town of) Eureka would be mine own personal Hell, although U.S. Marshal Jack Carter seems blessedly intrigued by it all, and the comedic actor plays the straight man to Eureka’s quirky left-brained citizens.

I found Eureka a bit on the eyerolly-side, in that it would have played better if they dived into something more Wonderfalls surreal, instead of a Jack Tripper-pratfall into embarrassingly earnest dialogue and a rice paper plot. It reeked of network meddling. You know what I mean – you can smell the executives dumbing down and recreating every scene into paint-by-numbers, because they think of the audience as a bunch of butt-scratching morons. Now, I have no more proof of this than I have proof of the universal hamster creating gravity by running on a wheel, but like I said, I watch a lot of television. The sweet thing is, the execs who ruin pilots are usually distracted by shiny metal objects by the second episode of a show, so I expect Eureka‘s writing to get a little bit better as the season progresses.

In the meantime, tune in to see Colin swathed in a bed sheet, Archimedes in a bathtub, and what happens to cows when the first of many quantum anomalies blows through a pasture. It’s pretty gross.