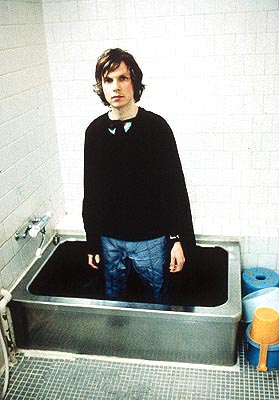 Listening to Beck sing about the tears he’s crying, the lies he’s living, and the loss he’s feeling on “Guess I’m Doing Fine” (the second song on his new album), one would doubt that he’s anywhere near fine. On his latest release, Sea Change, Beck steps back from the 808 that rocked his pelvis and his mic on Midnite Vultures to deliver a collection of finely crafted meditations on loneliness and heartbreak.

It’s a hard sell, getting listeners to buy an album full of what seem like break-up songs, but Beck makes us want in on the deal. On “The Golden Age,” the album’s opening song, Beck makes his sadness shimmer, tempering Hank Williams-style heartbreak with a gloss on his guitar and vocals that would make Nick Drake proud. On “Paper Tiger,” (as other reviewers have noted) Beck is reminiscent of Gordon Lightfoot. These comparisons might be frustrating for some artists, but Beck takes what we recognize from their stylings and makes it his own. In other words, there’s no question Beck’s doing original work as he makes his particular invocation of Williams, Drake and Lightfoot a pleasurable experience rather than a depressing one.

Short-term fans of Beck’s may find themselves alienated from the party boy who brought them Odelay and Midnite Vultures – it’s hard to imagine videos from any of the songs on Sea Change airing on MTV or featuring electrosex between kitchen appliances. Beck’s long-term fans – those who enjoyed Mutations (a.k.a. Beck does tropicalia), and who remember a time when he was recording on K Records and earning comparisons to Dylan and Guthrie – will likely enjoy this new offering. This is because Beck’s doing what he does best, at high or low volume: tapping into the popcult psyche well enough to know what we need to hear, what we’ve listened to and forgotten, and making old sounds seem familiar and strange (and both, in a good way) at the same time.

It’s rumored (according to Salon’s Stephanie Zacharek ) that the songs on this album were written directly after Beck’s break-up with his girlfriend of many years, Leah Limon. The story goes that Beck wrote the songs in one sad, creative week in 2000, and then recoded them a year later. While this may be partly true, I say don’t believe the hype: my favorite song on the album, “It’s All in Your Mind,” (a song I fell in love to when a boy played the song for me on his portable record player) was a companion piece to Beck’s 1994 album “One Foot in the Grave.” This song, at least, has a rich history in performance (proof lies in its appearance on a Bridge School Concerts compilation CD) before its inclusion on Sea Change.

“It’s All in Your Mind” gave me the incentive to buy this album, and while I love Sea Change as a whole, it’s still my favorite song in the collection. I wanted to be your good friend Beck sings to a love he’s lost, and it’s not hard to believe – the gesture doesn’t seem shallow. Beck’s adapted the song for Sea Change – in its first incarnation, the song was spare, featuring just the boy and his guitar – so that the song gets a new depth and we have plenty of time to absorb the most beautifully sad song I’ve yet to hear, the one I put on repeat every time I listen.