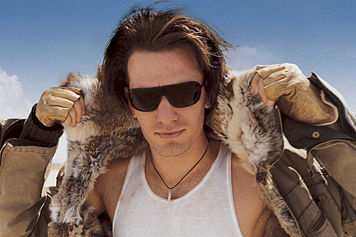 I was doing so well. A year in exile at a theater in Pennsylvania had me completely out of the *NSYNC loop. Even after my release into the wilds of pop culture in March, a combination of shockingly slow Internet dial-up and a single phone line has left me still virtually loopless, reliant on the kindness of strangers (and my fellow gurls) to keep me informed of any updates in the limbo-land of hiatus. I am no longer combing the drugstores for copies of the latest TeenBeat, I let my International Fan Club membership lapse, and were it not for my presence in Amanda’s house when his songs were leaked, I wouldn’t have even known JC Chasez was in the studio. Perhaps surprisingly, I felt good about it. Not that I had moved on – I was still attempting to convert people with bootleg footage and a dubbed copy of the Christmas album. But I felt like my life was a little bit more under control. Shrieky, incoherent phone calls had become a thing of the past.

And then I found out that JC was debuting his solo material live on The Wade Robson Project‘s finale.

“Some Girls Dance With Women” – apparently JC’s soon-to-be first solo single – started, and I froze in the middle of my living room floor with my hand in front of my mouth. In some respects, living nearly JC-free for over a year wasn’t the wisest of ideas. Much like a tolerance for alcohol, repeated exposure to *NSYNC in concert had built up in me at least something of a capacity to watch The Boys without falling over. Most of the time.

After being dry for so long, seeing JC on Wade’s show hit me much like a binge: dry-mouthed, slurring my words, and with a distinct lack of control over my limbs. This wasn’t even an ideal performance: sound levels, on a song in which the vocal tracks are already subdued, were way too low, especially initially. In a live performance, though, vocals are often beside the point. Between the tight black sparkly pants, the chest-petting and the body rolls, how JC sounded was hard to focus on. By the end of the song, with JC improvising wordless syllables, his voice was back in control, and the song had a distinctly Middle-Eastern sound which I found even more intriguing than the *ahem*leakedportion*ahem* had led me to expect.

Lyrically, “Some Girls” is pure JC: an ode to the time-honored tradition of women getting it on with their girlfriends on the dance floor. Stylistically, this song picks up where JC’s previous club-songs-with-a-twist have left off, spicing highly dance-able rhythms with a dash of foreign flair, which allows JC to showcase not only his voice, but his ability to fulfill every choreographer’s dreams. Sadly, every viewer’s dreams were not fulfilled. The cameramen seemed determined to avoid showing JC’s hips at all costs, especially when he was clearly doing something with them that elicited screams from the audience, and JC himself elected to wear outfits that exposed neither bare arms nor an inch or two of belly.

Where “Some Girls” has JC following in his own footsteps, “A.D.I.D.A.S.” or “All Day (Long) I Dream About Sex,” has him breaking new ground. Or more accurately, old ground. For all of you wondering whether Mr. Chasez has a possible second career as the replacement lead singer for the Sex Pistols Reunion Tour, the answer, as illustrated by this song, is yes. While the sound is pure 80s, the attitude is utterly punk. JC may dream about sex all day long, but this is not flowers and candy romantic sex. This is sweaty, in the elevator because you can’t wait until you get back to the apartment, leave you walking funny for two days with bruises you don’t remember getting sex. JC’s voice is nasal, almost grating, and even without the spanking of backup dancers or dig at the Joey-as-a-nerdy-teacher opening of the Pop Odyssey tour, it’s very clear that this song is not your teeny sister’s JC Chasez.

In their bids to distance themselves from *NSYNC, both Mr. Timberlake and Mr. Chasez have created songs with different sounds than those to which their fans are accustomed. But whereas Justin’s Justified was supposed to establish him as the R&B It Boy and Pharell’s new BFF, Schizophrenic seems designed to establish JC as a freak, and a kinky one. This particular performance on TWRP also channels a current of intensity that often appears close to frustration, if not anger. After his second song, Wade asks JC if it feels good to get his music out. Before he can even finish the question, JC is responding, “Finally. I’ve been singing in the studio forever. I’m glad it’s just out… I don’t have to worry about it anymore. People know.” Coupled with speculation that Jive is reluctant to throw its support behind two *NSYNCers’ albums at once and the continuing delay in releasing Schizophrenic, JC’s appearance on the show looks like a deliberate jab at the label.

I recognize that mine is not an objective viewpoint. I felt that Justin Timberlake’s recent foray into a televised solo performance was lacking. But Saturday Night Live is a difficult venue for performers, like Justin, who feed off the energy of the audience. Because the audience is behind the cameras, even when a performer is connecting in the studio it doesn’t translate on-screen. JC’s performance on The Wade Robson Project, however, had an electricity for the viewer that wasn’t diminished even with the poor sound mixing and disappointing camerawork. It left me wondering what on earth Jive can be afraid of.