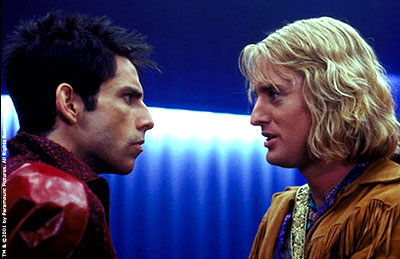 There was a time in my life when I wouldn’t have been caught dead paying money to see a movie like Zoolander (around the same time I wouldn’t have been caught dead listing to pop music, actually). But I remember the exact moment when my attention span went to hell and I vowed to never see another depressing, over-serious, or poor-film-quality independent film again: The mister and I were living in Kansas City, and we were seeing an average of one movie every weekend. Within two weeks we saw American Beauty, Saving Private Ryan and something else I’ve forgotten but was really angsty (it might have been the excellent Election). I couldn’t take it anymore. I wanted to see movies that would make me laugh. I wanted to leave the theater feeling better, and knowing I wouldn’t have nightmares.

And thus began my campaign to drag my husband to every teen movie ever released, with a smattering of summer blockbusters thrown in. He’s been fighting it, and he’s resilient. But I am firm in my resolve.

For obvious reasons, lately everyone in my house has been feeling the need to indulge in escapism. The roommate and I indulged in chick flick night last week, renting Someone Like You with Ashley Judd sucked and Miss Congeniality with Sandra Bullock funny. We dragged another of our friends out to see Rat Race–one of the funniest, most ridiculous movies ever, with the added bonus of Seth Green. All along we were taking baby steps toward Zoolander, which looked to have no redeeming social value at all.

No surprisingly, it didn’t turn out to have any, either.

What it does have is a hysterical ensemble cast, featuring Ben Stiller as the title character, an aging, dumber-than-a-post supermodel named Derric Zoolander. Luke Wilson–who became one of the funniest men in movies while I wasn’t looking–plays Hansel, the younger, Zen-channeling model who sends Derric into retirement. Jerry Stiller shows up as Derric’s manager, with enough bling to put Nelly to shame. And Will Farrell gives an over-the-top performance as a fashion designer with a plot to brainwash Derric into killing the prime minister of Malaysia.

I guess I should also mention Christine Taylor, Stiller’s wife and on-screen romantic interest, but she’s not really that funny, and every person in the theater was either saying (in the case of two annoying guys sitting behind us) or thinking “Marsha, Marsha, Marsha!” every time she was in a scene. How horrible it must be for her, to be defined thus by a role that should have been a throw-away.

Zoolander takes advantage of every single cheap joke that’s ever been made about the world of modeling. All the models are stupid. Derric decides to open, upon his retirement, The Derric Zoolander Center for Kids Who Can’t Read Good and Want to Do Other Stuff. Three of his modeling friends kill themselves in a freak accident involving a slow-motion, and sexually charged, gasoline fight. Derric visits a day spa, “D-A-I-Y-E.” It shouldn’t be as funny as it is, really.

A series of cameo appearances makes this film even better. Billy Zane is a riot and hot as a party attendee who tries to talk Derric out of his Walk Off with Hansel. David Bowie is the judge of said Walk Off. Fred Durst, Lance Bass (come on, like you didn’t think I would mention him) and Gary Shandling make appearances in both the brainwashing video and the final runway scene, all playing themselves.

Back when I snubbed my nose at movies like this, I didn’t understand why anyone would want to pay nine bucks to see low-brow jokes and 90 minutes of mindlessness. It all makes sense to me now that I don’t need cinema to challenge my mind (I get plenty of that at work, thankyouverymuch). Zoolander might not have any redeeming social value, but it’s damn fine escapism.