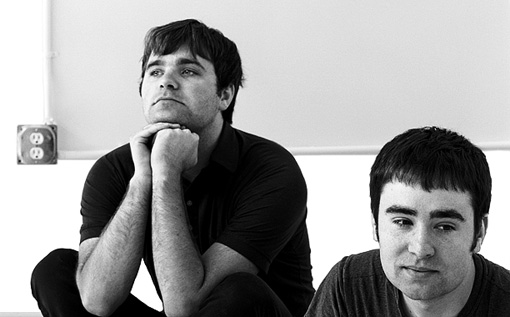 I’ve had The Postal Service’s Give Up since before it was released. And have I gotten off my lazy ass and written a review?

Well, obviously not. So what’s possessing me to do this now?

Eh. You know, the usual: avoiding work, boredom, guilt over not having written anything in a while. Then I went to see them last night and sort of felt that I should write them up. So now you’re getting a record/live show review! All rolled up into one package! Aren’t you lucky!

So, the record. It rocks. Seriously. You should go buy it. It’s kind of a hard sound to explain, but it might be sort of 80s-ish, though not offensively so. It’s pop-y and dreamy and, really, with Ben Gibbard’s voice it’s hard to be anything but dreamy. (Not Shawn Cassidy-in-the-70s pin-up dreamy, but mellow dreamy.) Gibbard’s vocals are so laid back it’s soothing. (If you’re from Seattle like me, you might possibly know Gibbard as the lead singer for Death Cab for Cutie.) The lyrics rock and I’m not a music critic so writing this and trying to come up with things to compare the sound to is kind of painful to me and really, all I can tell you is that you need to buy it. I could talk highlights on the album, but would you really trust my judgment? (“Nothing Better” – a song about being that delusional person at the end of a relationship who can’t figure out what went wrong but refuses to give up and won’t move away from the door so their formerly significant other can get out is my absolute favorite. If you cared.) And they’re not downers. They’re good! And pop-y! Oh, just go buy it. It’s gotta be good, two girls drove down from Vancouver (2 hours away! Plus customs!) without tickets to the sold out show just to see if they could get in. If that’s not a ringing endorsement, what is?

So, the show. First of all, this was an all-ages show. I didn’t even know that this particular venue, the Croc, did all-ages shows, but whatever. Now, nothing against all you minors, but an all-ages show differs radically from an over-21 show. I’m not talking the alcohol issue, because who cares about that? It’s just that the crowd is radically different. For instance, there was lots of shouting out for songs. Lots of it. Also, lots of shouting out in general. There were even a few “I love you”s tossed out there. When the band started to play “Nothing Better” there rose from the crowd the kind of screams you hear at an *NSYNC show. You know, that high pitched roar that sounds kind of like a death whine mid-orgasm? Yeah, that one. I can honestly say I’ve never heard that sound before at the Croc. I’ve also never heard someone yell out “I love you” at the Croc before, so there you go. I don’t usually see girls who aren’t 21 but want you to think they’re 21 so they wear their tightest pants, a gallon of make up, their mother’s stilettos, tossing about a bottled New York-attitude and pretending to make out with each other a lot at the Croc either, so, you know. Good stuff. Viva all ages shows!

Secondly, I know Death Cab for Cutie’s been around forever and is one of those Seattle bands all the hipsters are supposed to know, but I’ve never been to one of their shows so I didn’t know what to expect from the band or the crowd in general. Gibbard has this great, bouncy, totally stoned stage presence. It’s most excellent. But the crowd? It is with great sadness that I report that not all the poseurs have left Seattle as previously believed. In fact, they were all at the Croc last night. So, to sum up, it was a show filled with underage wannabe lesbians, screamers, poseurs, and a few relatively normal people tossed in to balance out the scales of good and evil.

This, one would think, would be a recipe for disaster. Surprisingly, it was a lot of fun. The crowd was really into the music and I even saw a few people break out into pogo-ing there near the end. If there was ever a more positive sign of a show going well, I don’t know what it could possibly be. Pogo-ing is, like, the ultimate stamp of approval. And the band seemed to be having fun – the band consisting of Gibbard who does this whole back and forth shuffle while bobbing that’s fantastically spastic and cute, Jimmy Tamborello on keyboards and the mixboard (and probably some other stuff that I couldn’t see because the Croc is not exactly the best laid-out venue and there was a support and a bunch of rude tall people right in my way), and a woman on vocals who may or may not have been the woman on the album. I’m not really sure. She did this bleating thing that’s not pleasant on the ears nor was it present on the album. So it might have been Lisa Wood, might not. If it was Lisa, I apologize for not knowing that.

If they come to your town, catch the show. You won’t regret it. However, if laid back vocals, hipsters, underagers and bleating don’t sell a show for you, then go for the video show they play against the stage background, replete with neon hearts and dramatic shots of stars zooming by! And don’t leave before the absolutely inspired encore cover of Phil Collins’ “Against all Odds,” which is way more bitchin’ than it sounds. The laid back Gibbard “emoting” his way through this song? Brilliant. Because seriously, his voice isn’t prone to emoting. So it’s slacker emoting. Which, sorry Phil, adds a lot to the song. Plus, those of us old enough to remember this piece had mocking rights over the confused youngsters in the house. To top it off, and maybe I’m the only one in the audience that appreciated this, after the beginning bit and a dramatic pause, what should pop up on the screen but clips from the movie, obviously lovingly spliced together and slo-mo’d for dramatic reasons!