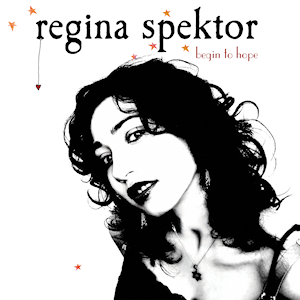 So you have a couple of days until Christmas, the malls are almost reaching capacity, unlike your patience that has already hit capacity level. You are stuck for gift ideas, what do you do. What do you do?

You hit up Popgurls.com for ideas. And if you’re looking for a present for someone who is head over heels in love with music, may I make some suggestions?

Does your friend own a Tori Amos or PJ Harvey record?

If you’ve answered yes to any of these questions may I offer up to you the new Regina Spektor album, Begin to Hope and My Brightest Diamond’s Bring Me the Work Horse. Spektor’s latest album sounds a little more polished than her debut Soviet Kitsch but she has a flair for wrapping the quirky, the heartbreaking and the playful lyrics up in a stylish little package as she is a wonder behind the keys. Although at times more lighthearted than PJ or Tori, Spektor does show definite signs of staying power.

Now, if your friend is looking for a little something darker, go with Bring Me the Work Horse. Now by darker, I’m not suggesting “Goth,” it’s just that My Brightest Diamond (aka: Shara Worden, who also pals around in the studio with Sufjan Stevens) is a bit more moody, and certain songs will definitely pluck at some bluesy and soulful heartstrings. The CD can be more in tune emotionally with something like Harvey’s To Bring You My Love album. A more emotional record, relying on more strings than guitar Bring Me the Work Horse would definitely be a nice addition to your friends CD collection.

Does your friend use the terms “beat-driven” and “DJ” and “club” in everyday conversation?

If you find yourself having to pal around every Friday night at a club with friends then you should probably hit up The Looks by Toronto DJ duo MSTRKRFT (born out of the now defunct band Death From Above 1979). In fact if you find yourself being dragged up to Toronto for whatever reason, if MSTRKRFT is not on tour you might catch their DJ sets. But if you’re not in to repetitive beats, don’t worry; this is something you’ll enjoy as well. These samples and hip shaking beats are so infectious that you’ll be the one leading the way when the impromptu dance party breaks out. In fact, you’ve probably heard MSTRKRFT before and not even known it, the duo is behind some of the hottest indie hipster bands around (Yeah Yeah Yeahs, Metric, and the Gossip, among others).

And speaking of hipster remixes, you could also check out Goldfrapp’s We Are Glitter (which is a remix album) or the studio album Supernature. It seems to me that Goldfrapp has been all over TV lately, having just made a deal with Target; in fact you’ve been hearing Fly Me Away on their holiday ads. I’d recommend Supernature over the We Are Glitter remix album, although both are excellent and fun records. Goldfrapp’s debut album Felt Mountain is moodier and darker, where as Supernature is more glitz and glamour, and it achieves this without coming off cheesy and lame. The tunes are poppy and catchy; definitely dance driven yet still something you can sing along too. Look for the song “Satin Chic,” it’s one of those sassy come-hither dance numbers, definitely one of the best tracks on the record!

Does your friend have a more acquired taste in music, are they a sucker for lyrical genius and are they a fan of off-kilter vocals?

May I present to you Orphans: Brawlers, Bawlers, & Bastards by Tom Waits. I don’t even know where to start with this and I don’t even know what to say about Waits that hasn’t been said already. I mean, yes, he is an acquired taste but once you’ve had it, you’re hooked and accept no substitute. Likewise your friend may be in deep with Waits, so this gift would be perfect. It’s a three-disc compilation — the first disc contains tougher, bluesy, and gritty tracks, amazing lyrics, interesting composition, and vocals that sound as if he is singing for his life in the gutter. I personally am a fan of the second disc, which features more waltzy tunes, eloquently presented in Waits fashion. They are songs of loneliness, loss and fading beauty, and I think that for many once you get past the offbeat tone of Waits’ voice, this is what it’s all about. What I like about this collection is that the book that it comes with features some never before seen photos as well as lyrics, which really are a testament to Waits’ work; he is an absolutely amazing wordsmith. This is one of the best releases of 2006.

Is your friend perpetually stuck in the 80s?

Good for your friend! So, follow up question, is your friend a fan of movie soundtracks? Then you should probably pick up the soundtrack to Sofia Coppola’s Marie Antoinette. Kevin Shields of My Bloody Valentine worked with this soundtrack and remixed a couple Bow Wow Wow tracks like “I Want Candy” with a bit of
drowned out guitar riffs toward the end of the track, it’s interesting to say the least. The soundtrack also features “Hong Kong Garden” by Siouxsie & the Banshees as well as some great songs from The Cure and New Order. It’s a two disc set, and the second disc tends to bring in some more classical compositions, and even if your friend isn’t that
big into classical, they really just work to accent the album.

Does your friend’s apartment contain any of the following: a Bikini Kill LP, a rock poster from Lollapalooza, VHS copies of My So-Called Life, books from a women’s studies class, or a copy of Only Everything by Juliana Hatfield?

First, I’d have to ask you what you’re doing in my apartment. But if your friend fits this category I’d be inclined to recommend the latest Juliana Hatfield release, Made in China. Hatfield is really returning to her catchy indie rock roots with this one, it’s more in tune with the work she was doing around the time that Only Everything was released. I think that your friend would really appreciate it, it’s more typical Juliana Hatfield, a self-released record featuring bittersweet lyrics draped against some nice guitar melody. Not as polished as In Exile Deo, her last record from 2004, but then again, that record wasn’t as angsty as this one, which is where Made in China gets its edge. Made in China is a release from 2005 but it was something that slipped under the radar for some, which is a shame. It’s a great record.

However, if you want something a bit newer from another alt-rock band, I’m definitely going to have to sing some praises for the latest Lemonheads release. Basically if your friend has any Lemonheads record at all, this self-titled release will definitely be a welcome addition. Evan Dando and the band are in great form, the songs are super-catchy and definitely addictive. You can’t go wrong!

Well, I’m going to have to suggest Partyline. If the were heartbroken upon hearing about Bratmobile’s separation, then you can cheer them up with the debut Partyline album: “Zombie Terrorist.” Partyline is fronted by Bratmobile’s Alison Wolfe, your friend my find comfort from knowing that her vocal style is similar to that of her former band. Sharp, and sassy lyrics backed by some real tough guitar licks, “Zombie Terrorist” is just the next step in your friend’s quest for new music.

Do you want to surprise your friend with some new music from a more mature rock act?

Sonic Youth has just released The Destroyed Room, which is a collection of b-sides and unreleased tracks from their back catalog. Clearly not a representation of their complete work by any means, I would not recommend this record if you were looking to introduce someone to Sonic Youth (there are better records for that: Goo, EVOL, and Daydream Nation are classics), but I would have to give this gift the green light if you’re looking to surprise a more seasoned Sonic Youth fan.

What do I want for Christmas?

The new Clash box set, The Singles. It features each Clash single as they were released on vinyl, only on CD. (Although the vinyl version of this would be fantastic as well). Each disc contains about three songs or so, to replicate the original single. In fact, they also come in little cardboard sleeves, just like the vinyl. If you have a friend who is also a die-hard Clash fan, I would definitely suggest snatching this up as I have heard rumors of it being a limited release.