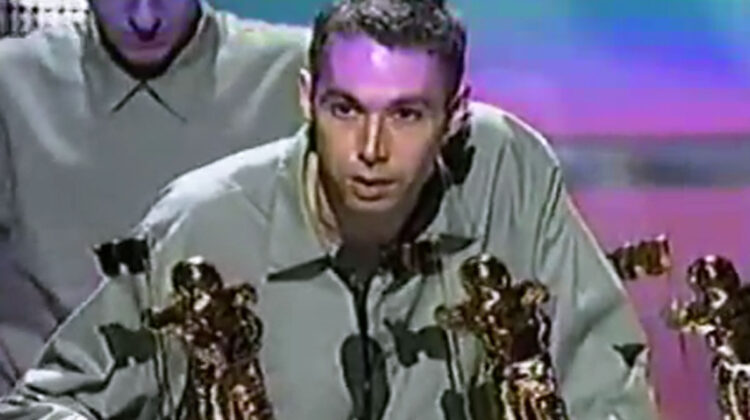 I didn’t know Adam Yauch. I never met him, or even spotted him in traffic or standing in line at a coffee shop in L.A. But when I read the news of Yauch’s passing last Friday, I crumbled. That afternoon, I drove over to the studio where his band recorded Check Your Head and Ill Communication, just a couple of miles from my apartment, and laid flowers by the back stairs. That night I curled into that tiny ball I can twist myself into when I want to show people I can fit into their carry-on luggage, and I sobbed quietly into a pillow.

I’m feeling this low-grade shame about how deeply affected I am by this man’s death. This stranger. This celebrity. I can hear the cynical sneer of a million anonymous internet commenters telling me that I should be crying over Darfur, or the economy, or something Obama said, but certainly not over a celebrity, as if this is a dirty word to be forcefully spat out with bits of phlegm. His widow, his daughter, his parents, and his friends have a right to sadness, but everyone else must remain stone-faced and resolute in the face of all this actual serious business. There can be no mourning for the artist with the record deal. Certainly not by a stranger like me. I’m just a random person with an iPod full of old school hip hop.

Shame isn’t what I should be feeling. Not even a little. I should feel pity for anyone who has never been so deeply touched by an artist’s work that they wouldn’t shed a tear about them passing. It’s part of our humanity to feel so moved by music that it can send those chills rolling over your skin, raising goose bumps and that hard-candy lump of emotion in your throat. It’s odd how the cynicism of others can make you doubt your own emotional responses, thoughts, and actions.

The night before he died, I was working on a piece for PopGurls, a defense of my favorite band from the haters writing angry screeds about their induction into The Rock and Roll Hall of Fame. So I was lost in thought, pondering the joy and wonder of Paul’s Boutique when my roommate spun her iPad in my direction with the same expression of pain on her face she held when The E Street Band’s Clarence Clemmons passed on. My stomach tightened into a fist, and I said, “I thought he was going to get better. I thought we’d see them at the Greek Theater in a summer or two. I don’t understand.” The headline had to be a mistake. But then, there it was, confirmed in the The New York Times. He was gone, my favorite stranger, who would now always be a stranger. A man I’d never meet, a hand I’d never shake, a voice I’d never hear ring out from the stage. Despair shook me. And now, a week later, I feel a cool, dim, emptiness. I wasn’t even completely aware that there was something there, filling me, to begin with.

So instead of writing the fierce defense of a body of work by a band I loved, I’m writing about grieving this stranger who lived with me, nestled next to my eardrums, connected by that white, plastic umbilical cord dangling out from underneath my chin to an old iPod buried inside my jacket pocket. For years, I’ve taken the same shortcut home from work, through Atwater Village, where these three young men recorded, played, lived, and wrote. There’s always some Beastie Boys mix straining the bass of my crappy sound system, (“so put your worries on hold and get up and groove with the rhythm in your soul…”) and as I round the corner onto Los Feliz Boulevard, whatever bullshit job issues holding a death grip on my spine melt away, and I am at peace.

Music has a way of creeping in to your subconscious, affecting you in ways you don’t realize. Kerry King’s guitar solo in No Sleep Till Brooklyn immediately transports me back to my grandmother’s living room. She had cable, and therefore MTV, and therefore the Beastie Boys. Ergo, No Sleep Till Brooklyn is now a song that reminds me of Thanksgiving at my Nana’s house when I was a kid.

Shake Your Rump brings me to the grungy girls’ bathroom in high school, my hair a crispy nest of aqua net, crying over a boy named Ralph. Intergalactic is a summer traffic jam on the Southeast Expressway in Boston, in a car with no AC.

And then there’s “Sure Shot.” When you’re a woman, there are times when every man looks like just another subway groper, catcaller, or abuser who will tell you that your experiences aren’t real, that your thoughts are silly, and that your mind is worthless. I was having one of those days. Something horrible happened to me, and I felt like garbage. Auto-piloting down the 5 Freeway, toward that Atwater shortcut, feeling numb, with a side-order of angry, the CD on random, when the words rang out: “I wanna say a little somethin’ that’s long overdue, that disrespect for women has got to be through. To all the mothers and the sisters and the wives and friends, I wanna offer my love and respect to the end.”

That something wasn’t little. Not at that moment. It was everything. I’d heard the song a million-and-one times before, but the lyrics came through the shitty factory-installed speakers of my Chevy (not an) Impala at just the right second in my life to remind me that the world was filled with good men who weren’t going to put up with this hatred any longer. That he was sorry about saying all that shit about roofies and toilet brushes. I pushed through to “Song for the Man,” and Adam Horovitz continued the thought, shoving back at all those assholes who felt entitled to my ass on the T, when I was a scared kid praying that the pervert would exit at the next stop. “What gives you the right to look her up and down?”

Usually, it was that trademark silly rapper bluster that lifted me up, my lip curling up in a smirk right about the time the Boys were shouting that they had more hits than Sadaharu Oh. It was “Sure Shot” on a summer day in SoCal that gave me courage when I needed it. It’s still “Sure Shot” that echoes through my brain when some dude makes a boneheaded remark. I think, “Someone cooler and smarter than you’ll ever hope to be is on my side. Now shove your male privilege up your ass and waddle away, motherfucker.” An old friend of mine explained, “…that one line makes so many things bearable.” And I wonder if he knew that, if any of them know that.

We feel this deep connection to the artists of our time; they can speak to us, for us, lift us out of the shit that pains us, sing at our weddings and barbecues…it’s as if they’re joining us in our celebrations and comforting us in our tragedies. It wasn’t the actual human, the artist named Adam Yauch who put his arms around me and lifted me up when the cesspool was pulling me under, it was his art. So I could never hug him back and thank him for always being there, because really, he wasn’t. That’s the frustration of this kind of grief.

It’s the one-sidedness of it all that’s killing me. When someone you love dies, it’s usually someone you know, someone to whom you’ve expressed your love. Maybe you even get to say goodbye, to express what they’ve meant to you, tell them they’ve brought you joy and meaning. You can seek comfort from family, pore over emails and photos of memories you shared, and find some peace in the knowledge that they experienced your gratitude for having them in your life. When an artist dies, someone you never knew, but still someone who seemed to know you so well, whose words gave you comfort…there’s a special kind of empty left in your heart. It’s not that I’m broken because I didn’t get to say goodbye. It’s that I was never able to say hello. I was never able to say thank you.

I don’t know that I’ll find any comfort by writing this into the void. I hope that he knew that for every person who shook his hand and told him that his work brought them joy, there were a thousand others feeling that way, too. I hope that Adam Horovitz and Michael Diamond can absorb that the love and respect ringing out for their brother also belongs to them, that this love is their legacy, too.

Adam Yauch, I will miss you. I didn’t know you, and I never met you, but I loved you, and I will mourn you. Thank you for the kind words, especially the ones that made me laugh and gave me courage and comfort. It’s called gratitude, and that’s right.