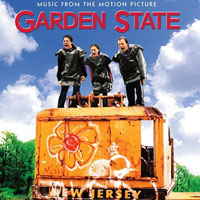 I have, in my music collection, a rather impressive assortment of movie soundtracks, a good half of which are from cinema I wouldn’t dare see. There’s also the On the Line soundtrack, worse than the movie, if possible, but we won’t go down the road of things one does at the height of fandom interest.

The thing I love about movie soundtracks is they are ready-made mix tapes, usually a pretty eclectic amalgamation of melody and rhythm, without any of the emotional baggage like that brought on by the mix your ex-boyfriend made you that you loved until you realized he gave it to you while he was screwing your best friend.

Today, we’re not talking about movie soundtracks in general. We’re talking about the must-have soundtrack of 2004, cats and kittens. If you haven’t bought Garden State yet, run on out to your local independent record store, or chain, if you must, and get your hot little hands on it. Because it won’t leave your discman or stereo for weeks, I promise.

It was pretty clear to me a week after Garden State‘s release that it was going to become one of those movies that resonated with folks. Hip, young cast. First-time writer/director with an uncanny knack for capturing that mid-20s angst; a cinematic Generation X, without all of the depressing fantasies about nuclear annihilation.

If the movie’s creation myth is to be believed, the story goes that when Zach Braff was trying to sell the screenplay he included his very own soundtrack as an audio accompaniment. Apparently people remembered the music as much as they did the script.

Braff is obviously my kind of guy.

Music in movies is generally a lesson in subtlety, but in Garden State it’s as central to the narrative as the evolving relationship between Large and Sam. The first time we met Sam, she’s got her headphones on, and proceeds to share her music with us. “You gotta hear these songs, they will change your life, I promise you.”

Be still, my heart.

Which brings us to the soundtrack itself. A soundtrack is, at its core, a mix tape that should reflect the tenor of the movie. The Garden State soundtrack does this, and then some. Sometimes melancholy, mostly mellow, underlined with hope, it’s as strong as a stand alone as it is a companion to the movie, but hey, see the movie, okay?

The track listing features two songs by the Shins, breaking the cardinal rule of a mix, but Braff’s so earnest a fanboy I can’t really hold a grudge. An understated Nick Drake, a track from Colin Hay that actually sounds more like Nick Drake than Nick does, an almost forgotten track from Simon & Garfunkel.

If you’re standing at your local music store, headphones on and trying to decide what tracks will sell you, check out Iron and Wine’s cover of “Such Great Heights.” There’s an emotional vulnerability here that Gibbard never managed, and it’s haunting.

Get past the name of the band and check out Frou Frou’s “Let Go,” a song that just might be the anthem for discovering how to live through your 20s. There’s beauty in the breakdown, the singer promises, and her voice is sincere enough you actually believe her.

Weak tracks? I have yet to find any. I’m a chronic skipper, even albums I love, and this one not only cycles through unscathed, I’ve had it on repeat. For days. I’m driving my coworkers crazy. The people in the apartment next door probably know the lyrics as well as I do at this point.

You don’t have to see the movie to appreciate the music, but this is one of those rare instances where the two are so expertly interwoven that in the music you can see the movie. From Chris Martin’s opening murmurs to Bonnie Somerville’s closing lines, the music is a narrative itself, which makes it stand head and shoulders above other such compilations.

The music may not change your life, but I bet it makes your day just a little bit better. For $13, can you really ask for more?