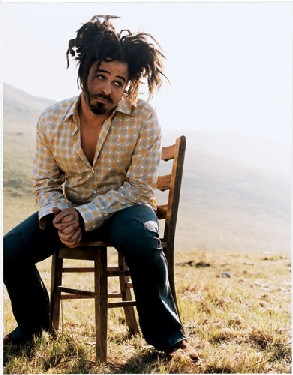 Even with the sweetener, there’s no mistaking the trademark soulful, deeply personal songs by Adam Duritz on Hard Candy, the fourth studio album from Counting Crows. If taking a bite of this doesn’t hurt your teeth, or break your heart, it might remind you why you should come when Duritz calls.

Duritz knew he wanted the perfect pop gems for this album, and all the ingredients were mixed just right. He took advice from Paul McCartney, and used vocals from Matthew Sweet, Sheryl Crow and Ryan Adams. As on past albums, the band recorded in a mansion-come-studio, going back and forth from the road to the studio to test and perfect the songs, resulting in moving lyrics with a polished sound.

The first single, “American Girls” is simple and much more straightforward than most Counting Crows songs. But it is memorable, making me want to sing along.

There is a trace of Joni Mitchell on the album. “Big Yellow Taxi” is hidden beneath the final track, “Holiday in Spain.” These two songs, along with “Richard Manuel is Dead,” remind us not to let life pass us by. Duritz’s hero dies, and he realizes everything he’s missing, and that life doesn’t last forever. We move, we grow, we change and so does everything around us.

Meanwhile, Duritz provides a portrait of past experiences with women (“Carriage”) and places (“Miami” and “Goodnight L.A.”). And still he cannot sleep (“Up All Night”). In “New Frontier,” he makes a believable cowboy who could take a rocket ride (which possibly explains a few random posts on the Counting Crows’ official website’s message boards comparing Duritz to future Cosmonaut Lance Bass).

Duritz admits in “New Frontier,” I could just be huge if I could just get from the outside of everything to the inside of you. Considering that Counting Crows are at their musical prime, the timing couldn’t be better. The band collapsed into anonymity after the instant and overwhelming success of their first album, August and Everything After, and now they will likely find themselves back in the bright light.