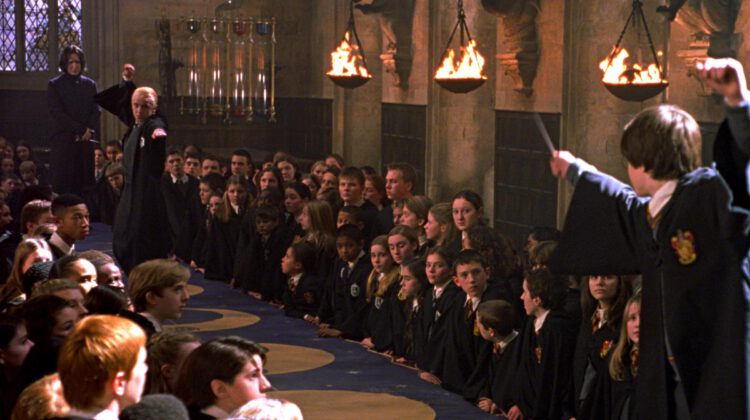 I hated the Harry Potter and the Sorcerer’s Stone movie. I thought it was unimaginative, devoid of life and overstayed its welcome by at least an hour. Even now, when I can’t fall asleep, I pop in the DVD and I’m out in five minutes. So when my sister demanded I take her to see Harry Potter and the Chamber of Secrets on the Sunday afternoon of the opening weekend, I was terrified. And rightfully so. It was over two hours and forty minutes! The theater would be full of children! Antsy children! It was inhumane! There was no way I could survive!

Imagine my surprise when I walked from the theater two hours and some odd change later with a delighted grin on my face.

See, part of the problem with the first film was not that it was too loyal to the book (I’m one of those people that goes mad and screams at the screen “That’s not the way it goes in the book, motherfuckers!” at the tiniest of diversions), it was that it made the book uninteresting. You’re playing to a fairly loyal audience that knows the story inside and out and to them the ending’s set in stone. Since there are no surprises along the way for the majority of your audience, the trick is to film the story in a compelling manner, one that justifies a near three hour running time. The first film failed to do so. But the sequel comes pretty damn close.

All of the actors are back, including the young lady that played Ginny for five seconds in the first film, which I thought was a rather nice touch. Rupert Grint and Daniel Radcliffe have grown about 10 feet and are both much improved in their roles of Ron Weasley and Harry Potter, respectively, while Emma Watson kicks ass as Hermione. I’m just going to gush for a moment and say that they couldn’t have found a better young lady to play the know-it-all from hell, and the reviewers that say Emma acted poorly in this movie are wrong, thank you very much. In my opinion, there wasn’t enough Hermione. Bring on the Hermione, yo.

Tom Felton hasn’t grown as much as Rupert and Daniel, but he still plays a really convincing ass as Draco Malfoy. Go Tom! Jason Isaacs as his father, Lucius Malfoy, is just fantastic, I could completely see him trying to destroy the world. He just sort of oozed hate and disdain and the character’s superiority complex so well that I won’t even mock his hair. He was that fantastic. I mean, look at that hair. I should be mocking it. Yet, I can’t.

So, what else was good, besides the performances? The script did a nice job of condensing-I know, I know, at two hours and forty minutes you’re going “condensing my ass,” but really, it did. These books are long and detailed, people, and I’m pretty sure that I’m not the only person fearing the film adaptation of the fourth book. Believe me, what you are watching is the condensed version. And as my feeble mind recalls, they managed to touch on all of the various plot threads from the book, some were just trimmed down a bit, like Colin Creevy’s part, Percy’s romance and Ginny’s angsting and crushing on Harry. Sadly, one part that was not trimmed was Dobby. But, to the film’s credit, they took a character that I, and many others, detest and made him almost palatable.

Repressing Dobby, as I am wont to do, and continuing along the vein of what’s good, the special effects were greatly improved this time ’round. Dobby was almost lifelike enough to kick across the room, and the Quidditch match was so convincing I’m fairly certain a few kids in the theater ran home afterwards and hopped on brooms. Here’s hoping they didn’t attempt to fly them off the roof. Remember that horrible troll from the first film? A thing of the past, my friends. The final battle betwixt Harry and the CGI monster de jour is so well done, I think we should send thank you cards to whoever gave up good portions of their young lives to create something so convincing.

And the best part? The kids sat through it. Sunday matinee, 12:45pm. Opening weekend. Damn near three hour running time. And not a single kid pitched a fit. I didn’t see a single family get up and leave because their child just couldn’t take it anymore. Save the young lad sitting next to me, but dammit. I was having a hard time holding it near the end, I certainly don’t blame him for not being able to last those last fifteen minutes. And while we’re on those last fifteen minutes, let me just say that I feel those were the single misstep in the movie. Cut ’em. It’s too difficult for me, at 28, to shift gears and go from battle mode to “let’s congratulate so and so now. Now let’s clap for so and so. And hey, let’s have a long shot of us congratulating this other so and so. And then let’s insert an overly dramatic return of another so and so,”don’t ask children three and up to do so.

So what do I give this movie? Two snaps and a twist in a Z formation, baybee. Go see it. Take your kids. Though, a bit of a warning, it’s actually a fairly dark movie. Anyone familiar with the books knows this, but I was really amazed at the amount of children five and under at the screening. I’m thinking those parents had some ‘splainin’ to do on the drive home. So keep that in mind. Also, there’s something at the end of the credits. I made it through four minutes of credits and had to go. And I mean, I had to go. They’re fucking long. So if anyone made it to the end, could you let me in on what it is? And those of you that have yet to see it, hang in there.

And go to the bathroom first.