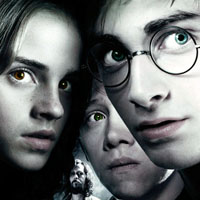 The biggest difference in Alfonso Cuarón’s interpretation of the Harry Potter franchise is not in the way it looks – although it’s certainly different – but in the way it feels.

Cuarón’s Prisoner of Azkaban is more mystical and less magical than the previous two installments of the beloved series, and it shows a fitting maturity, even as the young actors have grown past the awkward first blush of puberty. The PoA story centers on the escape of famed murderer Sirius Black from the wizard’s prison, Azkaban. For twelve years, Black was imprisoned for brutally destroying another wizard, but is more notorious for betraying the location of Harry’s parents to He-Who-Must-Not-Be-Named. This knowledge creates yet another layer of guilt and anger in young Harry, and the dark, gritty shadows of Cuarón’s universe communicate this perfectly.

The interior of Hogwarts School of Witchcraft and Wizarding was practically its own character in both of the previous movies, The Sorcerer’s Stone and Chamber of Secrets. With its moving staircases, gloomy classrooms and echoing hallways, Hogwarts encompassed the entire scope of the students’ lives. Young and untrained, the school was their awakening. In Prisoner of Azkaban, the students are finally allowed outside, into the wizarding village Hogsmeade and down to the edge of the forest. They’re graduating into adulthood. Even the costuming changes reflect this – the students only wear uniforms during class, and are otherwise dressed in jeans, sneakers and sweatshirts.

Cuarón creates a beautiful world outside the confines of the school. Brilliant green mountains surround the grounds. An ornate but crumbling bridge now leads from the main school building, across a ravine and toward groundskeeper Hagrid’s cabin. The school terms pass in the transitions of the seasons, each getting its own moment where the camera follows a leaf lazily to the ground, or tracks Harry’s owl Hedwig through the snow. Everything is more lush; the franchise itself appears to be blooming.

And so have Daniel Radcliff (Harry), Emma Watson (Hermione) and Rupert Grint (Ron). Radcliff, in particular, has grown into his role. His performances tended to be a little stiff in the earlier movies, which isn’t surprising, really, given his age and inexperience coming into one of the most cherished literary characters in recent time. Watson’s Hermione has always been a delicious mixture of snootiness and vulnerability, and Grint portrays sidekick Ron with just the right amount of awkwardness. Even these two, though, show a new maturity, especially in their scenes together. Ron and Hermione’s bickering, which gives way to several tender moments, is something that was almost completely missing from Chamber of Secrets, and thankfully it’s back in full force and better than ever.

David Thewlis was tapped to play Lupin, the werewolf Defense Against the Dark Arts professor who helps Harry overcome some of his fear. Lupin is Harry’s mentor in Prisoner of Azkaban, even more than Hogwarts headmaster Albus Dumbledore. He helps define the kind of wizard that Harry will become, and many fans did not feel that Thewlis would be sanguine enough to portray him. Thewlis does brilliantly, though, portraying Lupin as a powerful wizard whose skills are almost an afterthought behind his desire to do right by Harry’s parents by teaching their son to protect himself.

The screaming, wild-eyed face of Sirius Black has been seen on “wanted” posters for months in movie theaters, providing the first image fans would see of Prisoner of Azkaban. Gary Oldman, a favorite with critics for his dark turns as Dracula and Sid Vicious, had enormous expectations to fill. Sirius Black is a shady character in the Harry Potter series. At first thought to be a follower of the dark lord Voldemort, it is revealed in PoA that Sirius was not the one to betray Harry’s parents and in fact, broke out of Azkaban to avenge their deaths. Even more importantly, Sirius is Harry’s godfather, and provides for one brief moment a flicker of hope that Harry will not have to go back to live with his abusive aunt and uncle at the end of the school year. Like Thewlis, Oldman steps into his role with gusto, portraying Sirius as a madman intent on revenge, whose anger crumbles at the first sign of emotion from his godson.

Also new to the franchise is Michael Gambon, who has the unenviable position of filling the role of Dumbledore, left empty by the death of Richard Harris in 2002. Gambon’s headmaster is more enlightened than wise, more feisty than steadfast, but the distinctions are small and mostly noted in what others have called a “hippification” of Dumbledore’s wardrobe. With the long silver hair and pointed beard, his eyes hidden behind Dumbledore’s half-moon glasses, it’s easy to pretend no change was made, until Gambon speaks his lines.

Like any book-to-movie translation, Prisoner of Azkaban is missing big chunks of the book’s subplots: Hagrid’s appeal for the life of his hippogriff Buckbeak, Neville Longbottom’s Sneakoscope, Oliver Wood’s driving quest for the Quidditch Cup. These are all trifles, really, but there are two missing bits of information that voracious fans of the book will be disappointed to discover. When Harry conjures a true Patronus to save Sirius from the Dementors, it takes the form of a shield of light rather than that of a stag, except in one brief scene. In the book the Patronus takes the form of a stag for Harry because his father, an animagus with the ability to transform himself into an animal, always turned into a stag. This tie to his father is very important to Harry’s character, not just in PoA, but through the next couple of books as well. The explanation is missing from the movie, as is the introduction and explanation of Moony, Wormtail, Padfoot and Prongs – four men whose friendships and betrayals live at the heart of Harry’s story.

Prisoner of Azkaban will likely stand alone as a singular vision of the Harry Potter universe, as the next film (Goblet of Fire) will be helmed by yet another new director, Mike Newall (Four Weddings and a Funeral). It’s an intriguing way to run the franchise, allowing for many different interpretations of the text, and one that can be rewarding to fans if they can open up to each unique installment. Cuarón’s Harry Potter, teeming with ghoulish Dementors and the crackling of teenage emotion, is an awesome next step.