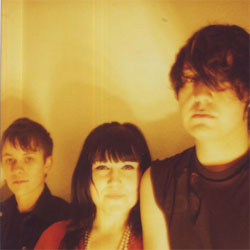 Within the past couple of years, there has been a huge influx of indie bands that have had the limelight thrust upon them by various media outlets. Television of late has seemed to jump on the bandwagon more than usual, with prime time dramas releasing soundtracks chock full of bands that college kids love to namedrop on a day to day basis. It almost seems that with this influx, its all style no substance. However, I have yet to see this one particular band lumped in with that soundtrack scene (thankfully); a band chock full of both substance AND style: Gossip.

A three piece originally from Arkansas, Gossip is led by one vivacious lead singer, Beth Ditto, who pulls out inspiration from the blues and soul music and blends it together perfectly with some merciless punk rock. Hannah Billie of the Kill Rock Stars band Shoplifting is on drums. And acting as the perfect musical foil for Billie is Brace Paine on guitar. Musically, the chemistry for the band is spot on, working through songs like a well oiled soul machine, Gossip’s latest record, Standing In The Way of Control, is no doubt one of the best albums of the year. Produced by Fugazi’s Guy Picciotto, it truly showcases a more mature band, yet at the same time never for one second compromises on the bands politics and passions.

This can easily be seen if one compares Standing In The Way Of Control with the bands first LP, 2001’s That’s Not What I Heard (also on the Kill Rock Stars label). It seems as if years ago the seeds of rock greatness were planted and within the past couple of years Gossip have really come into their own, reaping musical gains that are clearly not a in-studio-production trick, this band is the real deal. One must pay some lip service when it comes to a band who, album after album, (even in a few short years) evolved from the bare bones, stripped down blues influenced rock and roll sound, to a more mature style; which still holds true to some of those blues influences, but injects with it some, hip shaking new wave style. And it’s that fact that it speaks strongly to the bands DIY ethic, That’s Not What I Heard showcases a young band with so much potential. The vocals that Beth lets out are just quite emotive and intense, and at times, it seems as if the production value of That’s Not What I Heard doesn’t always capture that intensity, its almost as if you can see that music of Gossip couldn’t be contained. With Standing In The Way Of Control, you have a record that finally creates an excellent marriage of emotional vocals with a more savvy sound in terms of production. It’s surely a case of a band coming into their own, and maturing without losing any confidence, or their artistic ideal. And that’s what a lot of other bands miss out on, built on a shaky foundation, record stores are filled with bands who will only churn out one or two records, and there are many reasons for that. Sometimes others manipulate their sound, sometimes touring grinds them to a halt, and sometimes they just fall out of favor with their fans. The Gossip, however, have showed us the old saying is true: “practice makes perfect.” This is a band that, as you can see over the course of their discography, has not fallen into that trap that other bands have fallen into. Since the beginning they’ve remained true to their sound and who they are and have evolved with it. It’s nice to see a band maintaining a proactive and progressive musical lifestyle rather than churning out the same song over and over again for years. The evolution of their work is what’s so impressive, Standing In The Way Of Control is the record that longtime fans have been waiting for, and that people who are hungry for something new can eat up.

Oh, but are you still doubtful? Do you think this can still be some sort of coolly contrived studio trick? Not bloody likely! Beth and the crew are not in any short supply when it comes to confidence on or off stage, and it shows.

I had the opportunity to see Gossip at a club in Toronto a few weeks back. The band just jumped into it, leading off with the first single of their record, “Standing In The Way Of Control.” It was like a bomb went off when everyone in the club, packed to capacity got up and danced! Like magic, these motionless too-cool-for-school-indie hipsters, were instantly transformed to animated couldn’t-be-bothered-to-maintain-their-hairstyles dancing machines! Much like Kevin Bacon inspired Chris Penn to let loose and dance his cares away, so does Beth as punk rock’s very own Ren McCormack.

Beth comments to the crowd that she’s feeling ill, but is still clearly a force to be reckoned with. No germ or viral infection can bring this woman down. “Standing In The Way Of Control” is so well received by the audience who, at this point, are still dancing and shouting along with Beth, who starts to belt out one of the albums two ballads, “Coal to Diamonds” (the other ballad being the beautiful and heartbreaking “Dark Lines.” The record, smoothly goes from raucous and dancey to solemn and soulful effortlessly, a honed skill for the band I’m sure), it’s a nice break to the set, as well as beneficial to the audience we can calm ourselves down for a while. But before long, the set picks up again.

Arguably one of the best songs on the new album, as well as in the set, is “Listen Up,” a song that demands some serious hip swaying and hand clapping. “I warned you, you didn’t believe me,” warns Beth in the song, a warning, perhaps that maybe this band should not be underestimated. Working together for years these musicians have carefully crafted their work, and made some great progress. So far, they have avoided the trap that befalls other bands, being lumped in together with those all-style, no substance bands (and there are a lot of them). Honestly now, ask yourself this, isn’t it time that you treated yourself to a band who deep in your heart know won’t find themselves in the used bin of a record store six months from now once whatever trend sold the band out is over? It really is, you deserve better. You deserve a band that is true to their artistic ideals, a band that can get your hips swaying and make you just want to abandon all inhibitions. So do something nice for yourself for a change, get yourself a Gossip record.