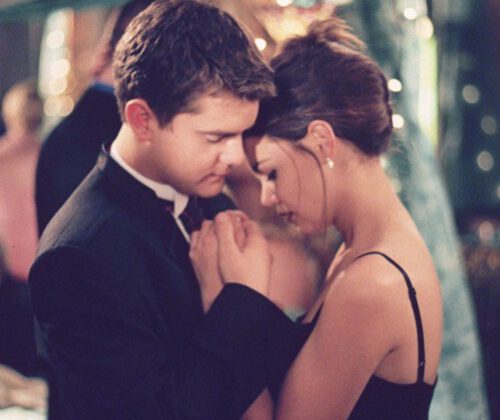 Here’s the thing — I rarely remember February 7th as something big and major. I don’t eagerly anticipate it or even think much of it, but then Laura will simply post “Sex Day” and all of a sudden I’m flush with memories.

Because February 7, 2001 was the date when Pacey and Joey had sex for the first time. After the heartbreaking and captivating Season Three (which I often call “The Ballad of Pacey and Joey”), we finally get to see them as a bonafide couple in Season Four. The Season Four premiere has them returning from a summer away on Pacey’s boat, now facing their friends and their friends’ assumptions of their virginal status. (Well, Joey’s. Pacey’s was long gone in the first season to his English teacher.) We learned that there was no change to Joey’s, much to Dawson’s delight, and that his opinion hangs over the Pacey/Joey relationship for much of the season.

There are so many shows that I follow, desperate for each new week to bring me a new episode so I could find out what happens next in the long strung-out tease to bring two characters (usually with ridiculous chemistry) together. (My current one, of course, being Leslie Knope and Ben Wyatt on Parks and Recreation.) But I don’t know if I’ll find anything that still makes me FEEL the way Pacey and Joey do, even ten years later. Every rewatch is like the very first time I see it — my breath catches, my toes curl and I tend to get teary. Which is such a testament to Josh Jackson and Katie Holmes and how believable they made their onscreen love affair when they had already worked through their offscreen one.

Some of my favorite moments:

Our recap of the Series Finale: Dawson’s Creek: Capeside Redemption