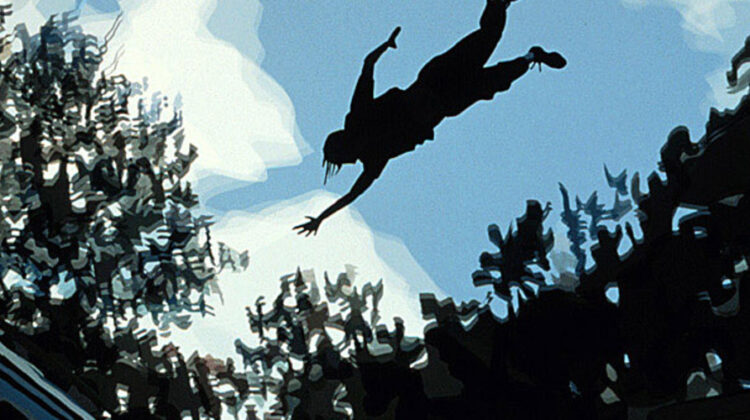 Even for a confirmed popgurl, there are times when you want to see a movie that makes you think about more than how glad you are you’re not in high school anymore, and where the prettiest thing about it isn’t the cast of actors who are, inevitably, younger than you.

Waking Life, by Richard Linklater–director of Slackers–is not a movie for the faint of heart. Or, perhaps more accurately, for the faint of mind. What starts as a seemingly slow-paced, illuminated textbook on Modern Philosophy, grows into an increasingly amusing, creepy, David Lynch-esque labyrinth, where the destination you expect quickly become a mere stop along the way. The main character, an unnamed young man played by Wiley Wiggins, finds himself engaged in discussions ranging from the question of responsibility in Existentialist thought to the new path and telescopic pace of evolution in the 21st century to the possibility of collective memory. Dreams and conscious versus unconscious thought become a recurring theme, and increasingly, the line between dreaming and waking becomes impossible for the viewer to identify.

Which sounds, unless you are a grad student in some branch of the social sciences, about as enjoyable as homework on the weekend. Did I mention that the movie is also funny enough that I found myself snerking loudly every couple of minutes? The movie was created using a technique called “rotoscoping,” where live action shots were subsequently drawn over, leaving the viewer with an animated movie that at times approaches photo-realism and at others has the simplicity of a line drawing. It’s a technique that not only renders each frame aesthetically beautiful–gorgeously rich in color and texture–but also allows for commentary and expansion on the scenes, beyond what can be done by the actors alone. By giving color to the skin on the performers, by giving visual shape to the theories they are discussing, the audience is allowed to glimpse the internal thoughts and motivations of the actors through more than just their expressions, gestures, or tone of voice. We are given another layer of insight. In addition, the animation is done with a fluidity and movement, even in the background and setting of the scenes, that as the focus of the movie narrows to dreaming, even the locations seem to become loosed from reality.

Wiggins’s character remains unnamed for the entirety of the film, becoming a sort of Everyman for the audience, allowing us to slip inside the skin of the movie and try it on for size. As Wiggins loses his bearings between waking and sleeping the viewer does, too. The language of cinema, with its jumpcuts, its compression and expansion of time, becomes the literal language of dreamtime. Instead of being used to move along a linear story, filmic technique is allowed to mirror the actuality of dreaming, with unexpected perspectives and leaps in space and time.

Allowing the viewer into the movie is a double-edged sword, however, because it makes it harder for the viewer to leave behind. If you’re not scared off by (or don’t grow impatient with) the vaguely new age-y talkfest of the beginning of the movie, you’ll find yourself drawn into a world whose borders are nebulous and purposely undefined, making signposts for your way back no easier to identify. I found myself thinking about Waking Life the entire drive home; noticing the way the lines flowed past on the pavement with the same insubstantiality as the physical barriers of the film. I went to bed still wondering if my life was what I thought it was, and woke in the night wondering if I was still dreaming.