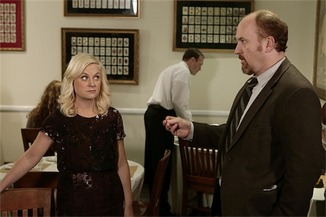 Last night was Parks and Recreation‘s much-hyped episode in which Dave the Cop aka Leslie Knope’s boyfriend from Season Two, played by Louis C.K., returns to Pawnee. NBC had leaked photos in which Leslie (Amy Poehler) was at dinner with Dave and her boyfriend Ben Wyatt (Adam Scott) – so we were expecting funny awkwardness. But “Dave’s Return” was as stressful and awkward to watch as it was for the characters to endure. Weird taste left in my mouth, here. (And it wasn’t Leslie’s ten beers.)

But first — if this romantic storyline with Tom (Aziz Ansari) and Ann (Rashida Jones) was supposed to make me like their pairing, it was very very off. Tom’s doing everything that I don’t like him doing. Forcing himself on Ann? Telling EVERYONE about them? Literally NOT FUCKING LEAVING HER ALONE? That shit was gross and I can’t believe they had Ann be “worn down” in the end. Ann needs a fucking backbone and I just DON’T BUY that she would give into that. She’s never in her life put up with Tom’s BS — they get along sometimes but when he gets gross she always cuts the shit. This was gross and I don’t like it. I’m really disappointed about it.

And I’m really disappointed about Dave. He was always such a sweet guy, but he was never disrespectful. Back in Season Two, when Leslie originally turned him down when he had to relocate to San Diego, he didn’t go crazy about trying to get her. And now, TWO YEARS AFTER THEY’VE LAST SEEN EACH OTHER, he’s apparently so in love with her that he’s going to try to manipulate her and literally lock up her boyfriend to get him away? That isn’t funny. It’s fucking selfish and disrespectful to Leslie, and I can’t believe they would write that for Dave. God. I’ve never been so disappointed in these writers and it’s really bumming me out.

However, I am very, very pleased with how they had Leslie handle herself. She won’t put up with this and I breathed the greatest sigh of relief when she straight up said Dave was acting like an ass. She told him it was inappropriate and she had him cut it out. I’m very happy and proud that the show called out Dave’s behavior, but that doesn’t save the fact that Tom got away with similar shit and it was supposed to be cute, and that the writers thought all of this behavior would be hilarious in the first place. It made me uncomfortable and not always in an enjoyable awkward-mockumentary way.

Ben was perfection, though, and the episodes had some of Adam Scott’s finest comedic work. Just hilarious and so painfully insane and I love love love when Ben gets to be crazy and Leslie has to reign it in. They both try to help navigate each others’ neuroses and they support each other so much. I love that Leslie flat out said that Ben is number one, and that Ben still wanted her to succeed despite all the crazy. He put up being taunted by a ton of cops – cops that he is already deathly afraid of — for her. I thought his head was just gonna explode. So adorably put-out and freaked out and Ben, I love you so much.

The B-story was significantly better. I love Andy (Chris Pratt) wanting to please Leslie with the perfect campaign song, and I love April (Aubrey Plaza) being turned on by Andy’s Svengali-like turn in the recording studio when the Parks crew can’t sing to his high standards. Then, I love April helping Ron (Nick Offerman) cover up all the Duke Silver posters and merchandise in the studio. Oh my hell, Ron secretly recording his Duke Silver saxophone to mix into the track to save Leslie’s song and Andy’s pride (and sanity)? Wonderful. Sad that there really wasn’t a lot of all those things due to some questionable male bullshit.

A version of this was originally posted on Caitlin’s blog: galentines.tumblr.com