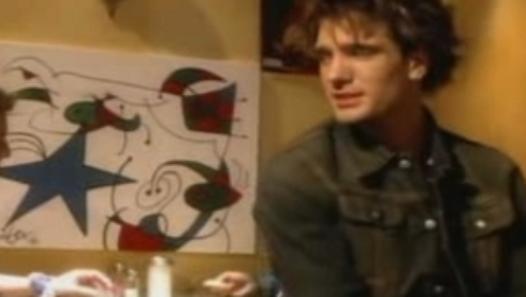 Can’t you see my desire?

No, and I think this is my problem. I can’t.

I’ve received numerous wordless phone calls and wordy emails on how hot The Boys are. How awesome the song is. How hot The Boys are. I’ve seen screen caps. I’ve laughed at JC’s hair. I’ve marveled at the normality of their clothes. I’ve made a note of the fact that Justin wears that god-awful necklace in the video. Why Justin, why? If anyone ever runs into him, could you please ask that and get back to me? Please?

So, having been a bad little PopGurl who missed said video [*NSYNC’s remake of Janet Jackson’s “That’s the Way Love Goes”], I was sent the mp3 first thing in the morning. Never say my gurls aren’t on the ball, oh no. From my coherency and conspicuously normal breathing pattern, I’m going to assume that hearing it is just not the same as seeing it. I can’t hyperventilate to Justin not-waggling his hips and molesting a wall. I have no basis in reality for Joey being so damn sexy you want to crawl up on his chest and pay rent there. And I certainly cannot fathom wishing for Lance to pin me to the wall with his sex-stare. I’m sorry willa, I just can’t. This is a problem. I haven’t seen it. Ergo, I am immune to what I am told is the inherent “fuck me now” sexiness of said song. The song itself has never done anything for me in the slightest, sorry Miss Jackson. The *NSYNC version has a nice groove to it, and I can imagine them bopping their little heads in unison, smiling all “Look mom, we’re harmonizing”-ly. Except for Lance – he doesn’t bop, he counts. It’s cute. Not sexy.

We’ll see about that tomorrow though, for Part Two of the *NSYNC “That’s the Way Lust Goes” odyssey arrives in my mailbox. willa hath overnighted The Boys to me, and it shall be good.

Dammit, it better be.

The excitement is almost too much to bear.

But not for long. The moment of truth has arrived. The tape arrived at 9:30am, I was kicked out of bed at 9:31am and then cruelly forced to wait until 4:51pm to watch it, but I survived. The following are my first impressions as I watch the video, between fits of insane giggles. No disrespect to da boys, but it’s fucking funny. God bless Janet Jackson video remakes. God bless them indeed.

-Chris, would you please slap that little bitch? I’ll teach you how to be fine, bitch.
-Can’t. Stop. Giggling.
-I do not hate JC’s hair. I am disturbed by this.
-Chris, Justin, lose the jewelry. Now.
-Justin, Justin, Justin, are you TRYING to speed me through my issues? What is that shirt? No willa, commando Justin does nothing for me. Does he not know how to shave? So not attractive. And your curls. They’re still gone. Fuck.
-I wonder if Joey’s playing Tetris. I like Tetris.
-Huh. Lance is fucking hot.
-Ha, look, Chris. Hi Chris.
-*sigh* Grooving = good.

The Second/Third/Possibly Fourth Reactions (willa says you have to see it more than once. Who am I to argue?):

-Shut. Up. Justin.
-Oh look, they’re grooving in synch. Ha ha ha ha ha ha.
-I’m sorry JC, but are those Birkenstocks?
-The apartment’s rather spare. Shouldn’t they have sassed it up a bit? Added a few other partyers to groove in synch, too?
-Still not disturbed by JC’s hair. Fuck.
-Oh, Lance. Disaffected suits you. It suits you well.
-Chris, you look so out of place. It’s cute. I want to pat you on the head and protect you from all the evil Justin lovers. Still, ditch the necklace. I’m not protecting that necklace.
-Oh, Lance.
-Go Chris, it’s your birthday. Go Chris, it’s your birthday. Did ya’ll see that? They let Chris SING!
-Have I mentioned “I don’t give a fuck” Lance is hot? I don’t even mind the stubble.
-Not so fast l’enfant, I mind your “stubble.”
-Justin’s barefoot. Doesn’t make up for his opening bit.
-His grooving almost does though.
-Oh, Lance.
-Almost an “Oh JC.” Fuck.
-Hee hee hee, Justin and the wall. Fucking fuzzy shirt, ruining the fucking shot.
-Oh, Lance.
-Oh, Justin’s grooving again. Mmmmm…dancing boys…
-That’s right Joey, just go with the beat. Mm hm.
-Lance can keep his jewelry. Mmmm…thick silver bracelets. Take notes JC, Chris and Justin. Take notes.
-Joey can keep his jewelry too. Unless he’s wearing the necklace. I can’t recall. Once again, I cannot support the neckwear. No way in hell, Superboy. No way in hell.

Conclusions: I am not on the floor. I am not hysterical. My breathing appears to be normal. My pulse is not accelerated.

What, exactly, saved my ass? Justin’s shirt. The crap under Justin’s chin. Chris and Justin’s jewelry. The severe lack of curls in Justin’s hair.

Thank you Justin, from the bottom of my heart.

Of course, this was all negated by the subsequent watching of the Fox Christmas Special, next on the tape of *NShame. But I’m not sharing that experience with you. I’d love to, but I’m just going to sit here for a moment, then check myself into therapy.