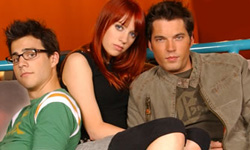 The release of Songs from Instant Star Two gave me an opportunity to test out a theory I had when I reviewed the first soundtrack volume – does it make a difference when you hear the soundtrack for television episodes you’ve never seen? The answer is…not really. At least, not for me.

For those of you who have not listened to my repeated pleas to check out Instant Star on The N, it’s not necessary that you be familiar with the show to make it through this review. All you really need to know is that Instant Star features real-life performer Alexz Johnson as Jude Harrison, the winner of an American Idol-like talent competition. In each half-hour episode, Jude writes, records or sings a new song. Those songs have been released by Universal so that fangirls like me can become even more obsessed with the show. It’s a genius, if obvious, marketing move.

Since Songs From Instant Star represented 16-year-old Jude’s first professional recordings, it was natural that the songs would be a bit immature. They are not, however, as immature as one would expect them to be, and because Alexz Johnson’s voice is so fantastically raw and powerful she manages to make even songs like “I’m In Love With My Guitar” sound good. (Remember, Jude is the character from the show, and Alexz Johnson is the person who plays her. This could get confusing!)

Songs from Instant Star Two is definitely a step up from the first volume. Released in early April, the soundtrack appeared before many of the songs had made their debut on television. My concern in reviewing Songs From Instant Star was that I had already seen the entire first season, and worried that my affinity for certain songs (like the gut-wrenching “Skin”) might be because I could couple them with my favorite moments from the show. Songs from Instant Star Two gave me the opportunity to listen to over half the album cold without the benefit of cherished storylines to draw me to one track over the other, and I’m happy to report that my familiarity (or lack of) didn’t affect which songs I prefer even one tiny bit.

This new album is more rock than pop, and can probably be attributed to the addition of a band for Jude in the show. This is a good thing, and not only because it means that folks who deplore pop music and all its trappings might have a chance of enjoying it. It’s also a positive thing for Johnson, whose voice sounds gorgeous stripped bare on ballads, but can really belt it out on more upbeat tunes.

After many listenings – where the tracks leapt over each other in the competition for my attention – my hands-down favorite song on Songs from Instant Star Two is “Natural Disaster.” It’s not as big as some of the other songs, and it’s not quite a ballad. (If I weren’t so anti-Sheryl Crowe, I’d be tempted to make that comparison.) It’s scrubbed down, primarily Alexz and an acoustic guitar, but it just gets me…right…there. “Everywhere you go it seems that lightning strikes and then you crash,” goes the chorus. And, how.

A couple of other standouts for this album are “How Strong Do You Think I Am” – which just popped up in the last couple of episodes – and “My Own Sweet Time” from the season premiere. “How Strong Do You Think I Am” is my immediate go-to song on this album, the one I put on repeat until I knew each word and vocal nuance. It’s big and bold, but also has a good story, about that person in your life you’ll do anything for, but who makes everything harder than it needs to be. “My Own Sweet Time” isn’t nearly that deep. It’s a song written on the road, about being on the road, but even for us couch potatoes it’s a lot of fun.

The one true ballad on this album is “There’s Us,” which we’ve been led to believe will not appear in the show until the finale in a couple of weeks. I love it already, because it somehow takes me back to being 17 and having my heart broken. “Not everything is supposed to come true,” says the chorus. “Some things are best unsaid, some love is not worth love at all.” And that, right there, is why even adults are watching these so-called teen shows on The N and falling in love with the characters. Because we were all there once, and as we get older we’re wont to examine our teen years with the benefit of distance.

Songs from Instant Star Two should be the next album you download, and if you’re not convinced enough to spring for the whole thing, spend the couple of bucks to get “There’s Us” and “How Strong Do You Think I Am” from iTunes. Let Alexz Johnson convince you that you don’t need to be a fan of Instant Starto be a fan of hers.