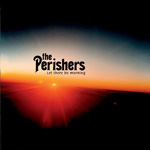 I have always been a fan of quiet, introspective musicians. Witness my endearing love of Toad the Wet Sprocket, the Indigo Girls and the Counting Crows album August and Everything After. In a game of Gun To My Head, one of these things will always come along with me to the deserted island. Because when it comes right down to it, as much as I love the way pop music can make me feel, I’d rather be moved by lyrics or soothed by an acoustic guitar or well-played piano.

Recently three new albums have come across my desk that earned an instant place on the playlist with my old favorites: The Perishers, Let There Be Morning; Magnet, The Tourniquet; and Dévics Push The Heart. There’s not a rollicking rock number or perky pop tune in the bunch, but each album is filled with mellow, moody music perfect for a rainy day under an afghan on the couch with a favorite book.

Fans of Veronica Mars might recognize The Perishers from their song on the VM soundtrack, “Sway.” It was one of my favorites on that album, so when I got a copy of the Swedish band’s 2005 album Let There Be Morning, I was glad to see that “Sway” wasn’t an anomaly in the band’s repertoire. The entire album is beautifully crafted, and it isn’t until the third or fourth listen that you notice the lyrics are just as witty as they are lovely and heartbreaking. Among the best songs on Let There Be Morning are the opening track, “Weekends,” which (and it pains me to say this) sounds like the best Coldplay song ever written, and “My Heart,” a premonition of lost love. Hands down, though, my favorite song is “Pills,” which is so crazy haunting that every time I listen to it I get a little choked up. Brilliant.

Magnet’s The Tourniquet doesn’t officially drop until this Valentine’s Day (you can buy it now on iTunes), but the alternative radio station in my area has already started playing the fantastic first single “Hold On.” Magnet — AKA Even Johansen from Bergen, Norway — made a name for himself among the snooty music press with his debut three EP’s (Where Happiness Lives, Chasing Dreams, The Day We Left Town) and debut album On Your Side, but he snagged the rest of us with his appearance on soundtracks for Mr. & Mrs. Smith, Six Feet Under, Monster-in-Law and The OC. The Tourniquet is reminiscent of just about any David Gray album, but the music feels younger, more vibrant than Gray’s Boomer-friendly songwriting. Standout songs include “Duracellia,” “Deadlock” and “Jaws.”

Releasing on March 7 (but also already available on iTunes), Dévics’ new album Push The Heart is so dreamy that it would fit perfectly in just about any David Lynch vehicle. Primary vocalist Sara Lov and multi-instrumentalist Dustin O’Halloran named their band after a little known guardian angel and have been releasing music together since 1998. Every track is so ethereal that it’s hard to pick one song out from the others, but from the first listen I’ve loved “If We Cannot See,” one of the few duets between Lov and O’Halloran on the album.

Nothing I’ve mentioned here is going to entice you to put on your dancing shoes. In fact, it might have you grabbing for a box of tissues, or digging out the love letters you wrote back in grade school. If it’s introspection you’re looking for, though, any of these albums is a good place to start.