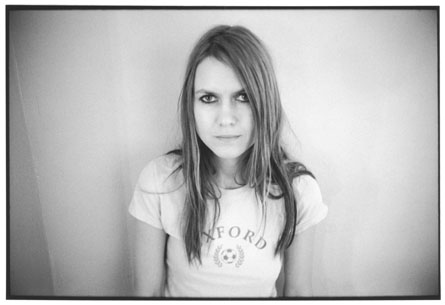 Juliana Hatfield was always the girl I thought would have beat up Liz Phair at summer camp, shown her a really wicked guitar riff, and then taught her how to inhale. While Liz started off on the right foot as an indie princess – with a scratchy voice and a dirty mouth – Juliana had the pretty storybook name, the sweet voice, and a sincerely bad attitude.

These were girls I wanted to be friends with.

After listening to In Exile Deo my opinion really hasn’t changed and the girls are still vastly different. In June 2003, Liz cranked out the sort of album you’d expect to appear in the age of mixing and smoothing, balanced out with a touch of gentle manipulation of harsh with pop. And Juliana? Well, the following May she managed to release a whole lot of healing venom curved around an amazingly pretty-girl voice with an age-defying face to match.

I used to know way too much about this girl. But once I listened to this album, all bets were off.

The first track, “Get In Line,” sets the tone for the album rather quickly. The driving beat pushes you along and lays out exactly how this thing is going to play out, all on Juliana’s terms. Lyrics such as Like a jaded ingénue I tried so hard to get you out of my mind/But the lies I tell myself they break down over time/Throwing rocks at clouds to tear their silver linings make the song as catchy as it is tough.

The whole album feels like a conversation with someone that starts out, “Yeah I have this friend who…” when in reality you have a very strong suspicion that the person is talking about themselves but is too embarrassed to admit it. Because Juliana’s past albums always felt so true, so autobiographical, it’s hard to separate her public story from the fictional content. “Jamie’s in Town” could just as easily be about hiding an ongoing addiction to drugs as it could be about hiding an ongoing addiction to a bad relationship, with lyrics like, Jamie’s back in town, I can’t run into him, I don’t want him to see me on a binge. My head flipped back to “My Drug Buddy” by The Lemonheads, which, legend has it, is about Evan Dando doing drugs with Juliana.

In Exile Deo ebbs and flows, shifting between tempos while feeling extremely personal and contemplative. It slides between songs of winking “Woe is me. You think I am weak but you’re really the fool” snickers, to scary, uncontrollable reality life-stories. “Because We Love You” fluctuates between self-deprecating empowerment and the self-injuring, enabling relationship with a dysfunctional parent. Lyrics like I’ll have another drink if it makes you laugh, we’ll try anything because we love you daddy… made me cringe. If this album is about healing, I have to hope that Juliana has exorcised a few demons.

Then “Tourist” made me second-guess myself. Perhaps I was taking the lyrics too literally. Everybody stares/She turns into a ghost of someone that you think you know but you don’t/You’re just a tourist in her world. The tourist comment feels like a defensive wink at everyone who thinks they know her so well. It reinforces the fact that the album feels autobiographical, yet Juliana doesn’t necessarily feel comfortable blatantly supporting that theory.

“Dirty Dog,” which comes complete with the sound of a dog barking and a rambling guitar and piano, just feels like a good girl “pretending” to be taken advantage of dirty sex song: You can steal my concept and drink my wine… You can flip me over from behind, that would be alright but I’m not down with the dirty dog// I wanna see your eyes when I draw the line. What isn’t quotable in this song?

Ultimately, I wonder, to whom is she talking? As was the case on her past albums, are her songs directed towards particular people, or is she just speaking in glittering generalities? Her comments feel specific – for example in the song “It Should’ve Been You” she sings You’re big in small circles, maybe big in France. But my country just never gave a damn… They’ll steal your best lines and your haircut. Who are “they”? In my opinion, this is a massive exercise in confused-girl-journal quotes, all of them dragged over, tugged and pulled by strong beats, and slammed into place by the girly babydoll voice of Juliana.

I think that anyone listening to the album would feel like Juliana was laying her inner self out on the line. However, anyone who was familiar with her previous work might feel like it was a new chapter in an old book – the question being, “Is the book good enough to keep reading?”

By the time I got to “Sunshine,” I felt like there was a chance that she might be shaking it off and I could finally envision her singing the rest of the album with a slight smile pulling at her mouth.

I’ve still got all sorts of questions. This is not a happy-go-lucky, dance in your socks kind of album. It feels like it’s a piece of her puzzle and a fragile one at that. Mr. Dando once sang, “She’s the puzzle piece behind the couch that made the sky complete.” Is this just another random puzzle piece to add to the collection, or is it the final solution to a lingering question?

The ultimate question being, are these songs autobiographical, and if so, is Juliana one album away from being happy?