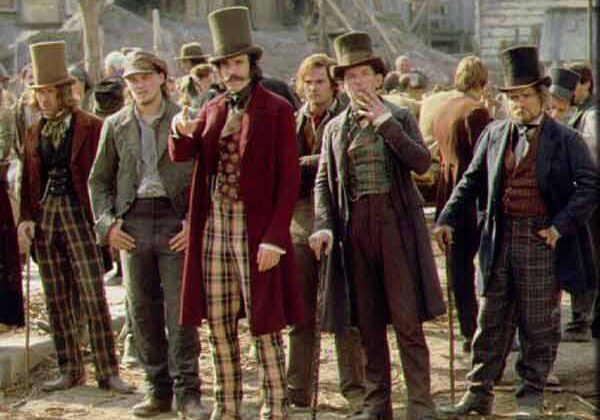 Though many of you who know me will laugh and scream “LIAR” at the following declaration, I need to start this off by saying that I’m not a huge fan of violence. Sure, I enjoy a highly stylized fight scene and often plan out elaborate action sequences when bored, but when it comes down to it, brutal scenes of people getting their heads bashed in and throats sliced and other scenes of people doing things to each other that people do to each other in real life that cause each other pain tend to make me squeamish. Due to this aversion to scenes of realistic violence I have yet to see many movies that people classify as “boffo” or “a must see” which have anything to do with Scarface or Platoon or Full Metal Jacket or other movies of war and decapitation that critics tend to love for their gritty realism.

Hence my excitement at being dragged to Gangs of New York.

Fine, I wasn’t dragged. I went willingly, if you define “willingly” as the stupid act of trying to be the cool girlfriend. Oh, you want to see a movie full of graphic death? Suuuuuuuure. No, it’s not a problem.

Whatever. I’m a wuss, I admit it, though I prefer the term “sensitive.” And if you, like me, find yourself wanting to cry when people beat the shit out of each other in glorious Technicolor and if you, too, make this same mistake and attempt to act cool please, allow me to help. Rather than a review*, below you will find a helpful guide to get you through this viewing experience with your sanity and quite possibly some of your pride still intact. Be warned, the following is filled with spoilers. Sorry, guys. It’s the only way.

The violence in this movie tends to be of the piece-of-wood-with-nail-sticking-through-it-bashed-through-the-skull-graphically variety. With lots of blood. Sometimes it spurts. Therefore, if this sort of thing makes you squeamish, it is rather important that you close your eyes for roughly the first 10 minutes, beginning when Bill the Butcher (Daniel Day “Crazy Man Lewis), Priest Vallin (Liam Neeson) and their bands of not-so-merry men and women charge at each other. Which basically starts about two minutes into the movie. I found it to be relatively safe to open my eyes after Bill the Butcher allowed Priest’s son to approach his father while Bill held him under his knife. Or, maybe he had already knifed him? It’s really rather difficult to remember, what with my eyes being closed. A knife was involved, I can tell you that much. Once Bill allows the boy to approach Priest, Priest says something to his son about never looking away and then is presumably killed while his son does not look away. I don’t know, I wasn’t looking at the screen, I was studying my hands and mumbling to myself. But after that (and you’ll be able to pinpoint this moment by the relative lack of sounds of hordes of people dying loudly) and once you hear Priest Vallin being stabbed, it is safe to open your eyes.

Once you’ve made it through the initial battle scene, you’re fairly safe for a while, unless you’re so delicate as to be offended by the sight of rotting teeth or Leonardo’s hair. If not, do sit back and enjoy the comings and goings of the cast’s Irish accents and the impalement of Elliot from ET on an iron gate. (This, however, takes place well into the three hour epic, probably around hour 2-2 ½, and take heart that you don’t actually have to see him being impaled, just hanging there moaning and being shot in the neck.)

Where else is it crucial for you to close your eyes and repress like there’s no tomorrow? As nearly as I can recollect, the next major piece of confrontation occurs when Amsterdam (Leo) attempts to murder Bill at the yearly celebration of Bill killing his father. There you’ve got some knife action, some beating to a bloody pulp action, etc. Of course, here you may have a dilemma of sorts—if you’ve ever wanted to see DiCaprio beaten to a bloody pulp, this is certainly your scene. It’s gonna be a judgment call, I suppose. Compared to some of the other beating scenes in the movie, this one really isn’t all that bad. I even opened my eyes a time or two to see what all the screaming was about.

Last, but not least, we have the last 20 minutes of the movie. This would be where the riots caused by the commoners distaste for the draft meet up with race riots meeting up with the showdown between the Butcher’s and Amsterdam’s posses. We’re talking 20 minutes of people being shot and stabbed, drawings of people being lynched, people being harmed and/or killed by cannon fodder and, of course, the final showdown between the Butcher and Amsterdam which features lots of moodily-lit knife slashings and blood spurtage.

The good thing about Gangs of New York, besides what the critics are probably calling masterful directing, is that it is at least merciful in the fact that you can tell a good hearty killing is coming minutes before it is actually graphically splayed across the scene. Mr. Scorsese, I applaud you for this considerate act as it saved me many a time. For instance, who couldn’t guess that Bill was going to murder the barber? Your kindness in allowing me to tell this was imminent by Bill’s stalking up the stairs while glaring evilly not only saved me the thrill of seeing a meat cleaver buried into the good barber’s back, but had the side benefit of preventing me from viewing the smashing in of his skull as my eyes were already closed for the previously anticipated violence.

While the above guide might give you some hope of leaving the theater relatively unscarred, you should be warned that closing your eyes is not going to prevent you from all pain, as someone really went all out on this one with the sound effects. May the gods of Hollywood grant them an Oscar for my pain. There are some very descriptive sounds being used for heads being bashed in, death cries, guts being eviscerated, etc. If, like me, muttering to yourself over and over again that “it’s just a cantelope being smashed against a wall, it’s just a cantelope being smashed against a wall…” does not bring you piece of mind and you, unlike me, care more for your sanity than that itty bit of pride you’re still hanging on to, I suggest ear plugs. Or just sticking your fingers in your ears, curling up into a ball and quietly humming to yourself. It all depends on how much mental torment you feel like putting up with later. May peace be with you.

*But how did I feel about the 2 hours or so of the movie that my eyes were actually open? In a word: Eh. For an epic it fell short. For a movie that spent such an inordinate amount of time in production and came out three hours in length, it still felt choppy, as if Scorsese was more in love with his battle scenes and his history than his characters. Besides the struggle at the heart of the movie, the battle over who ruled the Five Corners turf, the movie attempted to touch on class issues and the tension the civil war and the draft put on New York in its burgeoning state. Even a DiCaprio voiceover couldn’t tie it together satisfactorily. Instead, it truncated character development, asking us to just accept the conflict Amsterdam felt by being embraced by Bill rather than seeing it. It is never satisfactorily explained why Jenny, a young lass of Irish descent, would leave Bill the Butcher, who has looked after her for so long, and shack up with all the other disaffected Irishmen. For those matters, it is a mystery to me why Bill, a man so vehemently against the Irish and anyone not American, took so many native Irishmen into his gang and trusted them with his life.

In other words, the character development was lacking. And on a superficial level, I couldn’t believe the accents were allowed to come and go as they pleased. Isn’t this what looping is for? Though, I suppose if I was feeling generous an argument could be made along the lines that Jenny (Cameron Diaz) and Amsterdam (DiCaprio) were both either born in America or were brought there fairly young that their accents could come and go like the tide. But I am not feeling generous. It’s a 3 hour movie full of bludgeoning and greasy hair, folks. That does not inspire generosity in me.