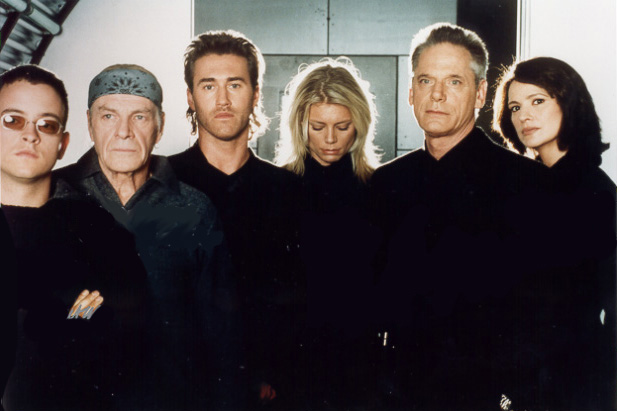 Viva Davenport
Or, Welcome to the Real La Obsession Nikita*

*warning: geeky gurls ahead. We’re not kidding. Consider yourself warned.

We, being two gurlies with an appreciation for a chick who can dig kick-ass (and ass-kickin’) footwear, even if Michelle didn’t agree with most of her choices, found ourselves delving head first into the tail-end of the fourth season of La Femme Nikita. I mean, who wouldn’t be awestruck at the sight of a near-six-foot beauty with a heart of gold, taking down bad-guys while still managing to get caught up in a good, old-fashioned, angst-ridden relationship? Exactly.

So, Michelle took up the internet attack while Amy held down the daily tapings of the USA midnight airings in an attempt to catch up on the world that is Section One. Because, as everyone knows, research is the key to any transition and we’re all about transitioning.

Okay, so maybe neither of us is a devastatingly gorgeous blonde Amazon, but that doesn’t matter none. Those long legs and arms just get in the way anyway. And so neither of us particularly relishes the idea of killing people or putting our lives on the line every day. Which isn’t to say that we wouldn’t love to have the know-how….but I’m kind of violent that way. But, you know, I don’t need to. I just like to threaten. That’s fine. ‘Cuz we’ve got the one thing Nikita has shown to be an integral part of being a successful Op…

Besides, we can be useful in ways other than doing the killing. We ran through our options… Operatives gotta eat, right? Well, that one’s out ‘cuz Michelle can’t cook. (She puts cream cheese in lasagna, for chrisakes!) Someone’s gotta clean Section One… wait, that’s no fun and not nearly as interesting a job title. Hmmm…the Operatives are clearly lacking guidance in the finer points of fashion. Perhaps we could help out there?

Well, really, we couldn’t do worse.

After pondering and pondering, we decided to fall back on our greatest assets. Truth be told, Michelle is a whiz with guns – glue and glitter. (Yeah, so glitter doesn’t come in a gun, so sue us. We like the alliteration.) She can also cut a mean crooked line. Amy’s got an arsenal of acrylic paint and she can make borders like nobody’s business. And please, do not attempt to stop her when on this mission, she is deadly serious where borders are concerned. We’ve showered cheer (and fear) across the land with our art projects, but now it’s time for us to put the crayons to good use.

Because, in the end, we serve a greater calling… we’re gonna keep the world safe for your lazy asses.

FIRST MISSION:
Upon discovering that USA was going to air a 12-hour marathon, Amy immediately decided we needed to show our dedication to the cause. She flew out to Michelle’s quarters so we could settle in and recap on what would be necessary for our training. (Okay, so the trip was already planned months in advance, but we don’t believe in coincidences.) Sacrificing the one nice day provided us by the gods of irony, we hunkered down in our foxhole and put ourselves through basic training. We are so ready.

What Michelle and Amy learned. Or, at least, what we’re allowed to tell you without having to slap you silly:

1. In order to be a successful operative, you must wear really, really bad clothes. Confusing necklines are a must. Unflattering cuts of leather are highly recommended. Black is your color of choice.

1a. An ugly and confusing collection of sunglasses is optional.

2. Speaking numerous foreign languages is a must. We’re not sure if you have to speak them well, but we think as long as you can threaten effectively, you should be in like Flynn.

3. Ridiculous shoes, for the female Operative, are required. Because it doesn’t count when you catch the bad guys if you’re not wearing stilettos.

4. Mission Pants: The Wave of the Future. Because, face it, when you’re out and about killing people, jeans just ain’t gonna cut it.

5. You must be able to take one for the team, on many levels. Sometimes it requires bending over, sometimes it does not. It really depends on the mission.

6. Saying “The briefing is on your panel” in an authoritative voice makes you really, really cool. And kinda sexy.

6a. Also, if you do this really, really well, a la Operations, it will almost make up for a severely misguided obsession with turtlenecks.

8. Saying things in a muted Australian accent makes them cooler.

9. Nikita is one fucking hot babe.

9a. However, no matter how fucking hot she is, it is possible to hear Nikita ask “why” too many times.

10a. However, geeky computer boys with egos and bad southern accents are not hot.

11. Replacing a hot, egotistical computer boy with his long-lost brother is a dumb, dumb idea. Making said long-lost brother have a horrendous Southern accent is even worse. Whoever made this decision will not be forgiven, and has been put on our abeyance list.

12. Madeline simply rocks. (Amy has found a new idol.) But sullying her cold-hearted, bitca image with a cheesy computer simulation is sacrilege. Guess who else is going on the abeyance list?

13. They can do amazing things with rubber masks these days.

14. The toys alone make it worth being an operative. Servitude, schmervitude. Have you seen their cool communicators?

14a. No matter how hard I try, my headset is never going to be as cool as Birkoff’s.

15. Everyone should have the option to call “Housekeeping” to clean up their messes, dammit.

16. Chicks with guns are cool.

17. “Advanced Terrorist Training 201: The Mullet. How to Get it, Maintain it and Use it Effectively.” Taught by Michael Samuelle, who also teaches the honors class: “Sidelong Glances and Grunts: Ways to Avoid Real Communication.”

18. The Mick Schtoppel Conundrum: Even really fucking annoying and nosy neighbors can sometimes be endearing.

19. Just because a show ends doesn’t mean that people should take down their websites. Especially the damn good ones. Because, that’s just mean, yo.

20. Davenport – we heart him. We’re taking up this new cause in honor of him.