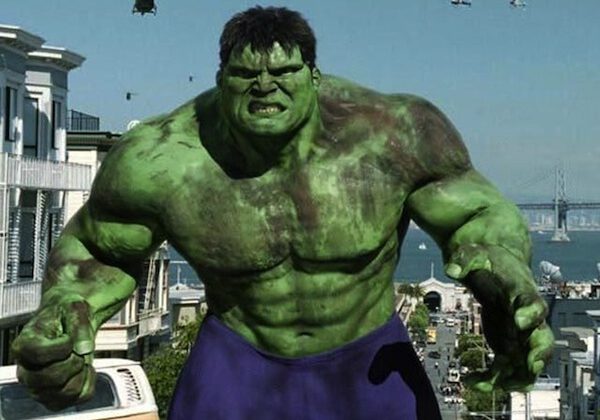 Confession: I went to see The Hulk because it was directed by Ang Lee. Despite my appreciation for comics and an affinity for the television show, The Hulk has never been one of my favorite stories, and the trailers I saw for the movie did nothing to alter this feeling. I am, however, a fan of Lee’s directorial work in Sense and Sensibility and Crouching Tiger Hidden Dragon, and the idea of what could have merely been a CGI-fest as a look at the psychology and underlying motivations of the characters held a lot of appeal.
Before every action fan reading this throws up her hands in fear and runs screaming, let me assure you that there are enough scenes of the big green guy smashing walls, military equipment, and generally throwing things around to satisfy all of you willing to pay the admission price. After the unfortunate early trailers a number of us saw in which the Hulk appeared glaringly green and almost cardboard cutout-y, the finished product is a lovely surprise. Although I still have a tendency to be unable to lose sight of the CGI-ness of CGI in a live-action movie, the Hulk looks almost alarmingly real.

But this isn’t what the movie is about. Instead, The Hulk rests firmly on the hunched shoulders of Bruce Banner and Betty Ross. Yes, Bruce’s past in the movie is somewhat out-of-cannon, but at least it’s intriguing. By creating Bruce’s sociopathic scientist father–played with teeth-grinding glee by Nick Nolte–and repressing a few of Bruce’s memories, Lee has brought together the ingredients for a truly emotional character study.

Jennifer Connelly (Betty) is gorgeous, as usual, and nicely conflicted with her own daddy issues. Nolte is about as over-the-top as it is possible for a person to be, and looks as if he spent the better part of his life on the street–which, thankfully, works for the character. Eric Bana (Bruce) is an oddity–almost too boyish-looking, which only makes his ever-more frequent descents into rage creepier. He is also the emotional heart of the movie, which creates a catch 22. Part of the appeal of the television show’s Hulk was his battle between his rage and his knowledge of what is right, and society’s continued misconception of his actions. In the movie, aside from a few brief moments with Betty, we never see the Hulk’s conflict. It wasn’t clear to me whether Lee’s focus on Banner’s conflict wouldn’t allow for an equal exploration of the Hulk, or whether in the editing of an already two-and-a-half hour long movie key scenes had to be eliminated; it’s a good thing Bana brings to his role an ability to illuminate his internal processes, or there would have been no center for the audience to identify with.

The script is lacking, sometimes expository and sometimes just bland, so it’s lucky that the story is told most effectively and beautifully through the visuals. I’ve heard a number of journalists and critics describe the frequent use of a divided screen as reminiscent of 24, but it’s a technique used here less to show simultaneous action than to give the feel of, well, a comic book. Not merely split, the screen is fractionalized–small boxes appear engulfed in a larger picture, multiple viewpoints are presented, and the camera pulls back through a series of micro to macro shots that manage to translate a flat technique effectively into movement and depth.

While I came out of the theater happier than I expected, The Hulk is a mixed bag. Fundamentally, the story is a grim one, and misses something by making the Hulk more misguided than misunderstood. Although the dialogue was weak, the characters–through a combination of great casting and thoughtful development–and filmic techniques are inspiring. Ultimately, I was left excited more for what this movie could mean for the genre than for the thing itself.