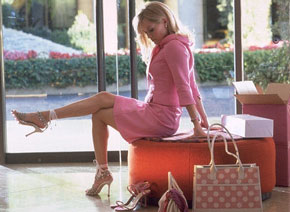 The real question about Legally Blond 2: Red, White and Blond is: does it taste great, or is it less filling?

The answer depends, really, on whether or not you (like my husband, and that comic geek from The Simpsons) believe that the more something happens, the funnier it gets.

In LB2, Reese Whitherspoon’s character Elle Woods goes to Washington D.C. to take on the tough issue of animal testing. She does all the predictable things, like wearing pink when everyone else is in black or assuming it’s okay to chat up any old member of Congress who happens to glance in her direction. And just like she befriended Stifler’s Mom in the first film, Elle finds a dowdy Congressional aid to spruce up in the second. There’s the running joke of Delta Nu sisterhood, and also the one about fashion know-how saving the day. It’s the same material, only spread thinner the second time around.

The thing is, though, it’s still funny. As long as you aren’t expecting Elle to be more mature, or less, well…blond, Red, White and Blond has some truly funny scenes and even maintains some of the vulnerability of the first movie. Elle is the same girl who tackled Harvard by believing that people who support each other come out on top, even if that support is a little unorthodox.

There are some slow parts, most notably the scenes in which Representative Rudd (played by Sally Field) bows under the pressure of a financial backer. The movie has enough going on without this lesson in how politics works. There are also some cringe-worthy moments, like an entire storyline about Elle’s dog Bruiser being gay or the introduction of the Snap Cup. (Which, for those of you not in the know, is a way of “giving snaps” to co-workers in an attempt to keep peace around the office.)

Part of the problem with movie-making in America today is that they’ll greenlight a sequel for anything that makes money, regardless of whether or not the story and characters are set up for such a thing. Unfortunately, this means that the sequels often struggle to maintain whatever it is audiences liked about the first movie. In the case of Legally Blond, that would be Reese Whitherspoon in cute outfits, which is easy to copy, but not necessarily something we need multiple doses of.

Red, White and Blond certainly falls victim to the sequel mill, but as long as you go into the theater understanding this, it’s still pretty tasty.

[Michelle: I am so sorry. I was totally going to add something, but I couldn’t say anything nice and so I think I’d better not. I know it’s fluffy and cotton candy, but for some reason I was in pain watching this movie. With the predictable evil harpy and Elle not actually being smart, just lucky, and then the dance in the Capitol building with interns acting like dogs and humping girls’ legs…it was just all bad.]