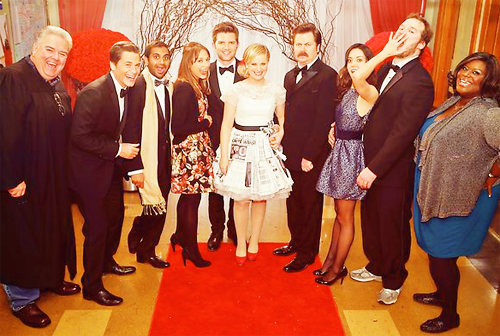 This moment was one of the most emotional for me in last nights Parks and Recreation episode, “Leslie and Ben.” April (Aubrey Plaza) and Tom (Aziz Ansari) have presented Leslie (Amy Poehler) and Ben (Adam Scott) with a “Leslie and Ben (and Us!)” scrapbook, complete with City Hall nametags a la Leslie’s birthday present for April in Season Two’s “The Master Plan.” The framed gift that April mocked in the episode where Ben arrived.

Leslie and Ben don’t “aww” and smile and give them hugs — she makes them stop. Leslie (and possibly Amy’s) reaction is to wave them away, because it’s making her cry. It’s all too too much right now — the emotional rollercoaster of the night, the support of their friends to not only throw a wedding together at the gala in two hours but then again a small, intimate surprise wedding in the Parks department. It hit me as hard as Leslie’s Christmas present/new campaign team reveal in “Citizen Knope.”

This teeny tiny moment, a wordless one at that, is one that you don’t see in sitcoms and yet another reason that I love Michael Schur and Alan Yang and the Parks and Recreation writers in trusting that its fans love its characters just as much as they do — and that we feel the emotional truth in everything that lead up to this moment. Not just the evolution of Leslie and Ben’s relationship, but of the friendships that were forged and nurtured and honored in that office.