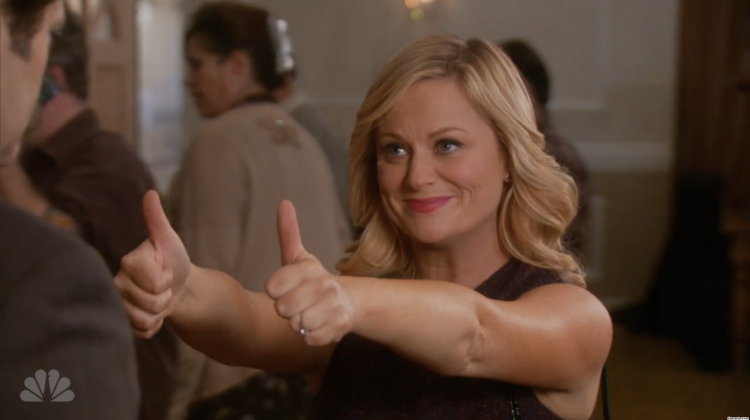 Mark: Honestly, Leslie, it’s going to be a long uphill battle. You are going to be super-annoyed with all the people who want you to fail. There is a sea of red tape, endless road blocks. So, yeah, I don’t know. I don’t know.

Leslie: Screw it. I’m gonna try to do it anyway.*

In all states of logic, I should not have gotten this project. There were far more qualified people, I’m sure. But *I* was the one that was picked, and I need to remember that.

It’s been a short, uphill battle — and one that I often feel like I’m doing alone. Lots of red tape and whoa, with the road blocks. But I’m still here, still muddling through. And I am not giving up.

I wrote this post on June 2, 2011. I was less than six months into writing my first book — a biography of writer/director Joss Whedon, who is, quite honestly, the reason PopGurls even exists — and was feeling so under qualified, overwhelmed and tremendously alone. I desperately needed encouragement and someone in my corner, and the most positive, productive and supportive person I could think of was Parks and Recreation‘s Leslie Knope.

I’d watched Parks and Rec intermittently through the first season in 2009, but it was late in the second that I fell hard for the land of Pawnee created by Michael Schur and Greg Daniels. I loved this show, loved it, evangelized it and went off to find the fandom — the first time I’d done that in five years. And I loved Leslie Knope, played by Amy Poehler, despite the fact that she was far more productive than I could ever hope to be — the “Energizer Bunny of City Government” that stayed up the entire night before a 24-hour telethon embroidering shirts for her team to wear during said telethon. We actually had a lot in common — she was my age and happy with her friends and career, and she was single, a fact which was never played for mockery or implied that she was less-than because she was in her mid-30s and not married. Leslie Knope could definitely help me through this challenge.

And so I started a tumblr blog called “Leslie Knope is my Life Coach.” Every post started with a Leslie quote that was a Knope-ful piece of advice for what I was going through:

This little blog was really just my way to root myself on when things were bad, and celebrate when things were good. The posts were short and hopeful, and having someone to work through the issue of the moment helped tremendously. It was my quiet corner of the universe, and when I finished the first version of my manuscript in October 2011, I took a break from everything — I still looked to Leslie, and Amy Poehler, for inspiration, but didn’t feel the need to keep documenting these moments. After dragging myself through two particularly horrible months in the fall of 2013, I remembered how much solace and support I’d felt when writing my way through problems with Life Coach Leslie Knope by my side. So in November, I checked back in and was floored to see that despite TWO YEARS of hiatus, I had over 1000 followers who also found Leslie to be as inspirational as I have. (It’s almost at 1800 now, a fact that seriously shocks me.)

In my “second season,” I found my footing and got more personal, not unlike Parks and Rec:

In the past year, I’ve tended to go back to earlier seasons for Leslie-inspiration. The beginning of Season Six felt so off-key to me and I didn’t have the same adoration and desperation for each Thursday to come as I had in years past. I’ll leave the grumbling to another time —  Parks & Rec has such a special place in my heart as this wonderful show came into my life and kept me buoyant through some very rough years. It gave me characters that I loved, relationships that inspired me, and lessons that changed me for the better. And my heart will always be filled with joy and gratitude for everyone involved on the series.

Tonight is the final episode of Parks and Recreation. The time has come, and I’m truly glad that the writers were able to go into the final season and craft it the way that they wanted to. This morning, I decided to go through my old posts and when I read this one again, I started to cry. A lot of things have happened since June 2011 — good, bad, amazing, horrible, heartbreaking and inspiring — and I’m on the other side of a massive, three year project that I started just as hopeful as Leslie Knope was about Lot 48. And the perspective I have now is the thing that I need to hold onto when going through the next set of trials and tribulations (and the next one, and the next one…), and it’s the life lesson I wish for everyone:

When you’re questioning whether or not you should do something that you are excited and passionate about, and when people are listing out all the reasons why you can’t do it — get your Leslie Knope on and tell them, “Screw it, I’m gonna try to do it anyway.” Then get your color-coded binders out, make a plan, and get to work. You can do it.