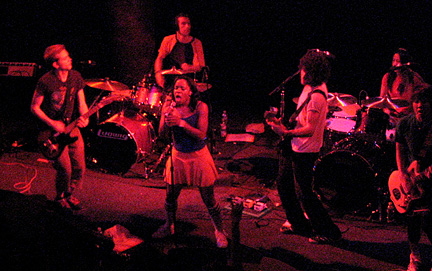 Let me say right off the bat and for the record that The Go! Team live is just as high-energy, fun and off the wall as their album Thunder, Lightning, Strike. For those who don’t know them, the group is based in the U.K. and their music is a mishmash of 1970s influenced tunes performed with double-dutch/cheerleading chants and raps, blaring horns straight out of a 70s car-chase movie, some Charlie Brown piano, a bit of harmonica, recorder and melodica, loud-assed guitars, turntable scratching, two drummers going full bore and finally some glockenspiel and banjo thrown in for good measure. Turn all that up to 11 and you have The Go! Team.

I really didn’t know how all this zaniness would translate to the stage, or even how the band was made up. Would there be horns? A turntable? Backup singers? No, no and no. The horns are sampled, there was no scratching and lead singer Ninja took on most of the vocals alone (with some backing by the very cute guitarist Kaori Tsuchida). What the six-member band brought to the stage, however, was a crap-load of energy that more than made up for anything missing from the album.

The real star of the show was Ninja who, dressed in knee-high socks and a yellow cheerleader skirt, performed nonstop arm-and-leg flailing dance moves when she wasn’t rocking the microphone. Her English accent added to her charm and she did a great job working up the audience, getting them to wave their arms and chant to the music while keeping a running commentary on whom in the audience was dancing the most. Her whole performance was fun and goofy, which is a refreshing change from some of the more pretentious hipster rock acts out now. Plus, her lack of cynicism fit really well into the band’s whole upbeat 1970s urban vibe. It was like an amped up School House Rocks episode without the lesson.

The rest of the band was actually tighter than I expected them to be and they surprised me by being multi-instrumentalists (except for drummer Chi Fukami Taylor, who pounded the drums on every song but “Hold Yr Terror Close,” which she sang with a cute, shy demeanor). Ian Parton, the band’s head songwriter, switched from guitar to piano to drums to harmonica between every song, guitarist Sam Dook played the second drum set when Ian wasn’t on it, Kaori worked the piano, glockenspiel and recorder when she wasn’t on guitar, and bass player Jamie Bell also played the glockenspiel and piano. All the running around on stage while to switch instruments just added to the chaotic persona of the band and made the show more fun.

For all the energized music that was being played, I was a little disappointed in the crowd’s reaction. Everyone seemed to enjoy the show, they waved their hands and even chanted a bit, but I was hoping for a full-on, charged-up audience that never stopped moving and it wasn’t there. (Not that I’m a charged-up, always-moving kind of guy, but that’s what I wanted to see.) I blame this on three things. The crowd was mostly made up of 25-35 year olds like myself (not excitable teenagers). The show also got a late start (The Go! Team started after 11 p.m., past a lot of 30 year-olds’ bed times). But most of all I blame the opening act, a downbeat Swedish jam band named Dungen. They sucked the lifeforce out of the entire audience with a series of pretentious 15-minute dirges that went nowhere. Whoever thought to pair this act with the most energetic band of the 21st century needs to be fired, or at least dope slapped.

The lame opening act aside, it was a great show. The Go! Team played all the songs from Thunder, Lightning, Strike, plus a few newer tunes not on the album. Some of the more laid back songs from the album like “Friendship Update,” “Everyone’s a V.I.P. to Someone” and “Hold Yr Terror Close” acted like little musical interludes between the rocking tunes like “We Just Won’t Be Defeated” and “Bottle Rocket,” which was nice. The good news for Go! Team fans is that the new stuff they played is a lot like the old stuff, but just different enough to be interesting (a little more cohesive and groovy perhaps).

The bad news is that The Go! Team isn’t playing a lot of shows in the states this year. Hopefully, their audience will continue to grow and that will change with their next album. In the mean time, check out this band and jump at any chance to see them if they come to a town near you.