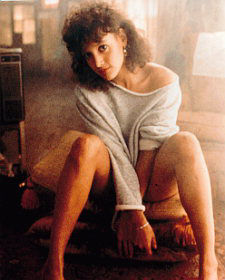 Yesterday I was watching this old special hosted by Gene Kelly that I had TiVo’d, called That’s Dancing. In it, he narrates a series of clips about dancing on film, intercut with some interesting interviews from aging dames. Then he started talking about things like Fame and Michael Jackson and, dude, Flashdance. Now, I honestly think I’d forgotten that Gene Kelly was ever alive at the same time as Flashdance, and even if he was mostly saying that the woman who does the dancing deserved most of the credit, he was talking about Jennifer Beals.

And then, lo and behold, here it is on Encore today. It’s been a while since I saw Flashdance on something other than TBS, which means I almost forgot there’s some gratuitous toplessness, a few colorful jokes (“What’s this?” Richie asks, holding out his tongue. “A lesbian with a hard-on!”) and more of Jennifer Beals saying “fuck.” All of which I find to be fabulous. This is still the sexiest, most romantic movie about sexual harassment ever!

And yet I’m struck that, unlike your basic “Don’t put out the red light” storyline in your basic hooker-with-a-heart movie, her boss never tries to use his apparently considerable influence in her life to either a) get her to quit being an erotic dancer, or b) quit working for a measly wage as a welder at his steel factory. In fact, neither seems to even occur to him. The meddling he does – calling a friend on the arts council to get her an audition with the ballet company – is really prompted by a series of sweet scenes where she tells him, over and over, how much she wants to be a “serious dancer,” how much she wants to apply to this school and train for real.

So he pulls some strings and isn’t very good at hiding it and she finds out and is pissed off, royally pissed off, because (I think) she wants to get these things for herself, not by sleeping with the boss. Except the boss was a hard-knocks kid from the neighborhood, too, who maybe didn’t have the benefit of someone giving him a break (unless possibly he got it by marrying his wealthy first wife). He just wants her to go after the things she wants. “Don’t you understand,” he says to her, “when you give up on your dream, you die.” And that’s after she hurls her high heels at him.

This is, despite all the rest, weirdly refreshing. Sure, at first he threatens to fire her unless she’ll have dinner with him. But he’s not sitting around seething with jealousy because she’s still get wet and dancing in her underwear in public – in fact, he comes to the club and cheers her on. He’s not trying to get her a more “appropriate” job as a secretary or something or whining about the oil under her nails. He doesn’t tell her to quit swearing, though he does chide her for smoking.

I was reading something by Roger Ebert recently about how movies have less sex – and less meaningful sex for women – than ever before. This movie actually has no explicit sex scenes, or anything close to it. But it has this strange undercurrent of sexual liberation that seems still rare. Consider in Save the Last Dance how much of the tension relies on sexual jealousy – who gets up on who in what club, who used to sleep with who and might want to again. Nobody really has parents, or else they are parents themselves already, and yet everyone is pretty immature. (Don’t get me wrong, I predictably have a soft spot for that movie, too.)

In Flashdance, Jennifer Beals goes to confession, goes to the ballet, fucks her boss in a steel mill (and then tells his ex all about it), happily lives by herself with her dog, and rides her bike everywhere. And then she decides that one lucky break doesn’t mean she’s cheating on her dream. Of course the ending is ridiculous – except we don’t even care by then, she can do anything she wants to. It’s a funny thing sometimes what liberation looks like.