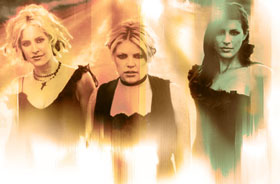 The once-perky lead singer for the Dixie Chicks has perhaps grown up, or been affected by motherhood, or been dulled slightly by controversy. Whatever it is, it makes for a completely different concert-going experience.

On July 16, I saw the Dixie Chicks’ “On Top of the World” tour, making it the fourth time I had seen them in concert. The first was at Lillith Fair (after the release of Wide Open Spaces), and despite playing before the sun had even begun to set they were absolutely the highlight of a concert that featured other boffo performers like Sheryl Crow and Sarah McLachlan. The second time they were touring to support Fly in Raleigh, NC, and nothing quite beats a country music concert in a place where it’s popular. Every person in the indoor arena knew all the words to all the songs; sometimes the singing was so loud you couldn’t hear the band. The last time was when I had the chance to see them tape the Dixie Chicks Christmas special at the Kodak Theater in LA, where they debuted the entire Home album.

Each of these three previous concerts was fun and energetic, and at the center of it all was Natalie, running back and forth during songs, telling funny stories about her bandmates, laughing at her own jokes, playing to the crowd. While Marti and Emily are tall, gorgeous and super-model-like (think Faith Hill with oodles of musicianship), Natalie is small and elvish with her ever-changing hair and her enormous eyes. Her personality is part of what sets the Dixie Chicks apart from other pop-country music acts like Faith – Natalie is all goofy spark.

This time the crowd was treated to a sometimes subdued, sometimes solemn Natalie. Sure, she kicked up her stiletto heels and flung her long hair (styled into a sort-of mohawk) to and fro. But she seldom smiled, and there were moments when she even seemed leery of addressing the crowd. Introducing the song “Truth No. 2,” Natalie referenced the kerfuffle over her anti-war statements – which led to organized Chicks CD burnings across the country – and her scuffle with country singer Toby Keith. She was greeted with cheers and some boos, to which she replied, “I’m going to assume the cheers are because you love us, and the boos are because you can’t believe we were treated that way.”

Even with this huge difference in the manner of their live shows, the Dixie Chicks still give one of the best performances I’ve ever seen. There was so much musical talent on stage, between the three girls and their band, that they could have not sang a note and I might not have noticed. The new material from Home, which I estimate comprised about 60 percent of the show, really showcases their instrumentation.

A couple of songs were real highlights for me. “Top of the World,” is my favorite song on the new album, and they debuted the video for it on tour. I swear it might give me nightmares if I ever see it again. The narrator in the song has recently died, and is talking about how he wished he had treated his wife differently while he was alive. The video has three different scenarios: a single mother who mistreats her young son, a young father who is distant to his wife and young daughter, and an older comatose man who is a burden to what I assume is his daughter and granddaughter. For the chorus, Natalie merges into this man, and she sings out of his mouth, and her face merges with his face, and it’s just downright creepy, but so amazingly done. “Top of the World” is one of the rare songs where the power rests with the vocals, and Natalie sounds raw when she sings it. It’s haunting.

I also love the old favorites like “Sin Wagon” and “Hello Mr. Heartache” because the crowd can’t help but respond – and this was a tough crowd, with little standing unless you were on the floor. “Wide Open Spaces,” their first big hit, is like a comfortable pair of jeans by now. And despite some cringe-worthy Jumbotron graphics, “Goodbye Earl” can still make me grin like a hyena (Buffy fans can think of evil, hyena!Xander).

To close, I should say a few words about Michelle Branch. She’s simply not big enough to be playing a large indoor arena. Her show consists of her and four band members, all of whom lack the stage presence to fill up such a large space. There was no Jumbotron during her performance, so unless you were directly in front of her, you couldn’t see a thing. I’m a fan of her music, and know her to be cute from her videos on MTV, but she’s just not there yet. I hope she’s smart enough to book her own tour in smaller venues.