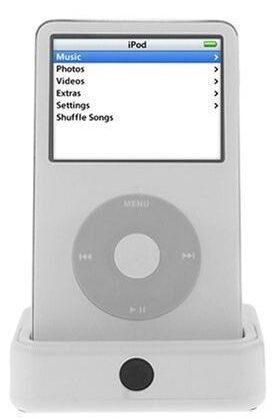 Here’s something most people don’t know about me: I don’t do digital music.

It’s true. While I have lots of nifty electronics – 100-hour capacity Tivo, a five-disc DVD changer, a DVD burner, and XM radio (including the car adaptor and the jukebox) – I have not fallen prey to the lure of the MP3 player, or Napster, or iTunes. I do not rip songs from CDs and make mixed CDs, at least not frequently. I don’t even like for friends to burn me copies of CDs they think I might like. I prefer my music to come on an official CD in an official jewel case which can then be alphabetized on my colorful IKEA shelves.

It is clear, even to me, that my hesitancy to dive into the digital music pool is mostly about my need to have everything in its nice, tidy place. Digital music is a lifestyle choice, and I’m not really that good with changing my lifestyle. (For example, my shower routine – wash hair, wash face, apply conditioner, wash body, rinse conditioner, dry – has not changed in over 10 years.) There are few things I like better than a good habit.

It is impossible, though, for everything to be the same all the time. We get older and get married (and force our new husbands to follow our old routines) and buy homes and move across the country. Recently, I’ve taken a new job, and it’s shaking up the way I manage my day, and the way I feel about the most ubiquitous digital music device on the planet: the iPod.

Until three weeks ago, I commuted by car. I love my car, and I love my six-disk CD changer, which allows me to have a nice variety of music with me at all times. (For the record, I almost never take jewel cases on the road with me; CDs are removed from the case, the case goes back on the shelf, and the CD goes into a lovely padded travel organizer.) Each day I loaded up the changer and drove 40 minutes out into the suburbs of San Francisco. Sometimes, I listened to the radio.

My new job is in the city, and driving is akin to sentencing oneself to a short prison sentence each day. As my mister says, you never know when a glass truck is going to tip over on the Bay Bridge. While my cute little car is resting safely in my garage, I am battling my way to the office – first on the area-wide commuter train, and then on a smaller in-city system. It wasn’t long before I noticed that just about every other regular commuter sported a pair of tiny white earbuds attached to a thin white cord snaking out of sight.

As a person who works in the advertising industry, Apple’s accomplishments with the iPod are inspiring. No one could have guessed that this particular device would become the badge of hipness for not only the desirable 18 to 34 age demographic, but for everyone who wants to carry their music library with them wherever they go. I knew, intellectually, that this was the case. I’ve read all the articles in Adweek and Brandweek and all those other “week” publications that follow my industry. It wasn’t until I started commuting with the Church Of The iPod, though, that I started to realize how cold and empty my life was without one.

For the last three weeks these thoughts have been nagging at me. Why don’t I have an iPod? How could I let myself be so uncool? How, if I were to purchase an iPod, would I manage to circumnavigate my obsessive-compulsive tendencies? When I buy my new iPod, what sort of case will I buy to go with it? (For it will have to have a case, I could not stand for it to get scratched, which is seriously the only reason why I do not currently own a titanium Apple Powerbook.) Can any case I purchase possibly be as cool as one of the colorful iPod Minis? Is it really important for me to have 5,000 songs in my pocket instead of 1,000?

And then Apple went and announced the launch of the next generation of iPod, an upgrade of the device that has twice the memory and all the super-neat features of the Mini (though it’s still white) without increasing the price. What’s a girl to do?

Make the purchase, of course.

The mister and I went out on Friday – two weeks after the launch of the upgrade – foolishly thinking we would be able to walk into a store and buy the new generation 40G iPod. The new generations were sold out everywhere. In San Francisco, in New York City, in Los Angeles. If only I had gotten over my hang up in time to buy immediately. Instead, I ordered online, where I got to engrave my gorgeous new gadget with the message of my choice. On line one it will say “PopGurl” and on line two, “smart.sassy.shameless.” As if I would possibly pick anything else – although I did draw the line at using our actual URL.

Now begins the waiting – it was shipped from Shanghai yesterday! – and the planning. Everyone keeps trying to convince me that I should start ripping my CDs now (I have almost 600 of them, which will take awhile), so that I am ready to load up my iPod as soon as it gets here. This is not going to happen. If you can’t already tell, I’m a girl who needs to do things in a certain order. Ripping before the product arrives is not the way. Instead, I’m already thinking through which CDs I can skip and in what order I want to rip. I’m planning songs to download from iTunes. I still have to decide on a cool carrying case of some sort.

And, most importantly, I have to choose a song. The first song I will ever play on Roger – which is the random name I have decided to assign to my new little white plastic fantastic friend. Do I want it to be cool – like maybe the bootleg of Adam Duritz and Vanessa Carlton performing her hit “One Thousand Miles”? Should it be an old friend, comforting like a warm blanket, maybe the Indigo Girls’ song “Mystery”? Should it combine my love of pop music and the music of my childhood, like Mandy Moore’s cover of “One Way Or Another”?

All I know is that it has to be a song that says, “I am a commuter, and I am every bit as cool as you.”