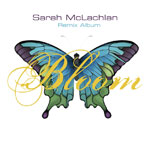 I’m not one who typically goes for song remixes. While many of the more hardcore fans are protective of their favorite artists and feel that remixes are bastardizations of their music, I’m just not a big fan of house or techno dance music to begin with. In my opinion, it all sounds the same, and though I can think of few things I like better than dancing for three hours straight in four-inch stiletto heels, I’ll walk right out the door when the music turns to the “unce-unce-unce” beat of typical club music. (My pal E says that it depends on the DJ, and since he’s a crazy club kid I trust him, but in my experience it’s like one big song.) For my money, I’d much rather have live albums with fresh takes on old music, than a remix album with the same beat running underneath every song.

Thus, when I got an advance copy of Sarah McLachlan’s latest remix album Bloom, I didn’t have high hopes. Not only am I a huge fan of McLachlan’s live albums, but over half of the songs on Bloom come from Afterglow, which was the first McLachlan album I didn’t love. (McLachlan’s last remix album, Remixed, features songs I adore, but is gathering dust on a shelf.) I am happy to report, however, that there are definitely some gems on Bloom that will go into heavy rotation on my iPod. I’ve even been thinking about giving Afterglow another chance, so much do I enjoy the old songs in their new form.

My absolute favorite track on this album is the Sly & Robbie mix of “Train Wreck,” which is more funk than dance driven. It’s not entirely different from the original, but the slight changes do a nice job of driving a track that was already pretty good to begin with. “Stupid” and “Dirty Little Secret” also get nice makeovers. The Thievery Corporation mix of “Dirty Little Secret” also leans away from the typical dance category, while the Hyper remix of “Stupid” manages to be just under eight minutes of a drum and synth beat I can actually get behind.

There are a few earlier songs on the album, which meet mixed results. The Dusted mix of “Ice” (one of my favorite McLachlan songs to hear live) maintains the haunted vocals of the original and lays down a beat that doesn’t interfere. The Junior Boys mix of “Fumbling Towards Ecstasy” reminds me of listening to Love & Rockets LPs in my friend Jenny’s basement. It’s a bit sinister and a lot ’80s. Tom Middleton reaches all the way back to 1989 to mix “Vox,” a song that was recorded when McLachlan was 20 and hadn’t quite developed her trademark vocal capabilities. In an album otherwise full of lush, mature vocals, this song stands out like a sore thumb. It’s hard to judge if the mix is really good because a) the casual McLachlan fan isn’t going to be familiar with this part of her career and b) it’s distracting how thin and reedy the vocals are.

Other songs include fairly typical mixes of “World On Fire” and “Fallen,” which aren’t awful but aren’t really my taste, as well as a sitar-driven mix of “Answer” that in my opinion is more odd than enjoyable (though lots of other reviewers are digging it quite a lot). This brings us to “Just Like Me,” featuring DMC of Run DMC and mixed by will.i.am of Black Eyed Peas. McLachlan’s biggest contribution to this track is the repeated chorus of “Cats in the Cradle,” and the sound is more hip hop than anything else. This is a good example of why someone like me would buy a remix album – it’s fun, original, and features a collaboration no one could have seen coming.