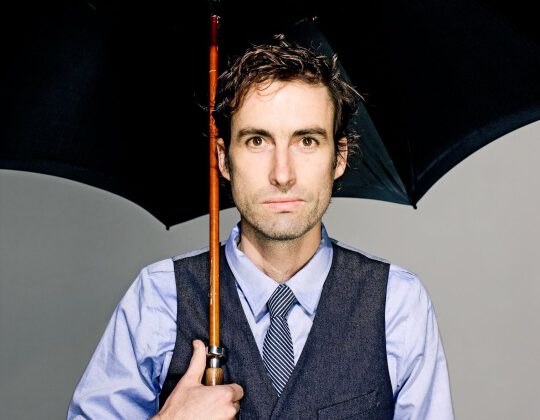 One of my managers is as obsessive about music as I am. However, he is also nearing 40 and was a club DJ in the 80s, so he has become disenchanted with modern music over the years. He simply never hears things he finds interesting or even good. (He was overly fond of that Kelly Clarkson song, “Since U Been Gone,” but who wasn’t? You’d have to be dead not to jam out to that.) My feeling is that he simply is not looking hard enough. There is so much amazing music being put out these days if you’ll simply put in a bit of effort. So I made him this CD as proof. All these songs were released from the year 2000 on. And believe me, it was hard picking. I could have easily made it a four or five-disc set, but I think we’ll just start here.

Note: This is by no means meant to be any sort of indie rock/art pop/whatever primer. Some of my favorite bands didn’t even make it on, and I had to remove entirely too many songs from the running because they were from 1999. The point was not to show him all the biggest names, but to give him music based on his tastes, and try to turn him on to stuff, make him start looking for himself. Teaching a man to fish, kind of thing.

1. Andrew Bird – “Fake Palindromes”
Andrew’s voice is very similar in timbre to Rufus Wainwright, but Rufus was never in the Squirrel Nut Zippers, playing his violin like a madman. I saw Andrew open for the Magnetic Fields last summer and was simply blown away. The verses are so strange and violent and wonderful, but the real kick is in between the verses, with the cacophony of percussion, bass, and swirling violin that sounds like tape loops… it’s so energizing.

2. Need New Body – “Show Me Your Heart”
Strange, primal, fantastic noise rock. These guys have some of the weirdest music, but it’s not so weird as to be completely inaccessible.

3. Belle & Sebastian – “Step Into My Office, Baby”
I questioned whether I should put this on, considering the subject matter (an inter-office romance between a man and his female boss), but ultimately, I decided the song is too good not to put on. It’s so damn catchy, there’s no way you can not love it. Bouncy and fun, I could honestly listen to this song over and over and not get sick of it.

4. Wilco – “I’m the Man Who Loves You”
I knew that my manager surely knew of Wilco, but this song is a reminder of how incredible they can be. When he was first reading the tracklist, listing off which bands he had heard of, he said, “The Wilco song is awesome.” And he’s right. I love Wilco’s shoegaze stuff, but this song has a tremendous old school rock feel to it, without being classic rock. The fuzz guitar and the breakdown of noise at the end are ridiculous.

5. M. Ward – “Vincent O’Brien”
A kind of strange, otherworldly blues song. The narrator asks his mother and various animals, “What do you do when your true love leaves?” And they all have the same answer, “Make a sad, sad song,” until the girl comes back. It just has a strange vibe to it, slightly ethereal, like you’re listening through cotton. Or something.

6. Clem Snide – “Accident”
This is quite possibly my favorite Clem Snide song. There’s been an accident / Where once a pretty view / Was missed a thousand times / From staring back at you. Slow, pulling, tugging…this song is the feeling of longing and loss. It’s so beautiful and perfect, I can’t even begin.

7. The Mountain Goats – “No Children”
The Mountain Goats are so prolific that it’s not funny. And almost all of it is good. This is the first song I ever heard of theirs, and I was blown away. I sat in the car and waited for the song to finish, then immediately called the radio station to find out what it was. New folk that is so bitter and angry and gorgeous. A marriage where they can do nothing but fight and hate each other. Every line in this song is superb and quotable.

8. Sufjan Stevens – “The Man of Metropolis Steals our Hearts”
I wrote about this album before and I still maintain that this song is one of the more amazingly energizing songs I’ve heard in a long time. Beautiful and understated, moving into pounding and anthemic; I cannot get enough of this song.

9. Troubled Hubble – “Where Raccoons Don’t Live”
These guys are actually friends of mine, and no matter how much begging I do, I cannot get them to play this live. It’s on an EP that came out last summer while they were waiting to release their album (which came out this May). This is a song narrated by a bizarre man who has lost his girl, and as such has lost his touch with reality. Crazy, bitter, awesome. The build-up and loops throughout the first verse, almost eclipsing the end of the chorus, lead to a complete explosion and the second verse, showing how completely off the boat he has fallen. “If you think that bleeding pig heart I mailed you was weird, you ain’t seen nothin yet.”

10. Ted Leo & the Pharmacists – “Me and Mia”
Ted Leo is an institution by this point. I had an argument once with a friend of mine, trying to figure out which we loved more: Ted’s falsetto or his mighty scream. Ultimately, we were at an impasse, as both are wicked cool. Smart, scathing punk, fueled by anger and indignation that is completely justified; it has the beat and power to make you dance around like an idiot and headbang for the first time in years.

12. The Arcade Fire – “Neighborhood #3 (Power Out)”
I know everyone loves the Arcade Fire, but there’s a mother-effing reason: They live up to every bit of hype. They put on an amazing live show that is psychologically and physically exhausting for an audience member. I can’t imagine what state the band is in afterwards. Win’s strange, broken vocals alternate between sweet/romantic and primal/screaming, while the instruments pile on top of each other, creating a wall of sound that would make Phil Spector proud. If you can listen to this without getting chills, there is definitely something wrong with you.

13. John Vanderslice – “Pale Horse”
The back-masked guitar on this sounds like there’s something wrong with your sound system, but in a good way – if that makes any sense. Vanderslice is widely considered the nicest guy in all of indie rock. I met him once, and it’s totally true.

14. Jon Brion – “Here We Go”
From the Punch-Drunk Love soundtrack, this song never fails to cut right to me from the very beginning. You’ve gotta hope that there’s someone for you, as strange as you are / Who can cope with the things that you do without trying too hard. The orchestration is simple and gorgeous (you don’t hear a lot of oboe in pop music these days), never over-powering, just pushing it to the exact point. Countered with his all-too-human voice, it just tugs. Hard. Working mostly on movie scores and soundtracks, Jon Brion has made some of the most beautiful music, perfectly constructed and produced. He has released a regular album, but without the movies it just seems to be missing something. I have a pin that has a remarkably similar sentiment to this song, perfectly encapsulated: “Deeply cynical, but always hopeful.” I have to stop talking about this song, or I will turn into a gushing idiot.

15. Elliott Smith – “Somebody That I Used to Know”
There have been a number of times that I have put this song on a loop, spread out on my floor and stared at the ceiling, listening for stretches of time that should be impossible with my ADHD. Elliott is moving on, letting go of this person who caused him so much pain, but we all know that you never totally get rid of these people. Part of you has been broken, and you’ll get scar tissue, but never fully heal.

16. Modest Mouse – “Sleepwalkin'”
Based off the Santo & Johnny oldies song, “Sleepwalk,” this is another “sit and stare” song. Gossamer vocals floating over guitars sliding slightly in and out of pitch give this song an out-of-body feeling, perfect for long late night drives.

17. The Detholz! – “Mr. Electricity”
Also from Chicago, I saw The Detholz! when they were playing on the same bill as Troubled Hubble, and immediately was enamored. They’re super-energetic and fun, and this song is totally going to wake you up after those last few songs. I cannot listen to this song without dancing around.

18. Bearsuit – “Going Steady”
The first time I heard Bearsuit, I thought, “Holy lord, this is so weird. This is awesome!” It’s normal indie pop, just through a strange view. Messy and so fast that it can’t keep up with itself, it’s not immediately accessible to most. But if you dig on that, you will love this. The opening to the song is like switching between radio stations that are all playing just one instrument’s track from the song. Plus, recorders! How sweet is that?

19. The Dismemberment Plan – “The Dismemberment Plan Gets Rich”
All the noise and chaos of the last track, but highly controlled. A tale of the band’s imaginary exploits, the song is so silly and wonderfully energetic. It also has a special place in my heart as it was somehow the first song of theirs I ever heard. The very short breakdown for “Joe got caught aboard a boat with seven tons of opium” was the point where I thought, “These guys are geniuses!” And I never looked back.

20. Ryan Adams – Come Pick Me Up
Ryan writes some of the most supremely mean but amazingly beautiful love songs. The chorus to this song is ridiculous. Come pick me up / Take me out / Fuck me up / Steal my records / Screw all my friends / They’re all full of shit / With a smile on your face / And then do it again / I wish you would. This song is about that person that is so outrageously bad for you and causes you nothing but pain, but you’re so far stuck in them that you love them for it.

21. Butterfly Child – “Girl on Fire”
I got this song on a compilation cd of Chicago indie-pop called Urbs in Horto. There were only a handful of tracks on it that I really liked, but this was the one that I immediately latched on to. It is understated and mellow, but so joyful feeling. The shuffling guitar, the strings, the optimism (which, if you haven’t noticed, is generally lacking in my music); they all just fit together so wonderfully. It’s one of those songs that, no matter how upset I am, can pull me out of it and put a smile on my face.