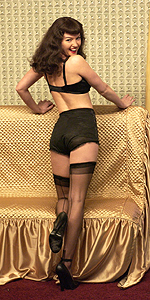 The Notorious Bettie Page moves along like a really good PBS special sans droning narrator, all grainy black and white film interspersed with muddy Technicolor. With little fanfare, the film lays out the surface details of Bettie’s life, from her childhood steeped in Christianity through the illustrious Pin-Up Queen of the Universe years, but this visual recitation of facts isn’t quite enough to justify the cost of admission.

Gretchen Mol, probably best known for 1999’s Sweet and Lowdown, does an admirable job pulling dozens of cutie-pie faces for Bettie’s cheesecake pin-up shots. Her affected syrupy southern drawl gives the character an extra sweet politeness that somehow manages to carry over into her nude scenes, so that all that naked skin feels as innocently displayed as a baby in a bathtub. Unfortunately for viewers, there is little motivation given for why Bettie does things, like moving to New York City or taking acting classes or stripping bare for a photographer in the park, and the pieces of exposition the audience does receive are not very satisfying.

I should interject here that there is quite a bit of nudity in The Notorious Bettie Page, more even than I was expecting from a film about a pin-up model. However, it is tastefully presented by an actress that seems ultra comfortable in her body, and was shot by another woman – director Mary Harron – who obviously appreciates the female form. When Mol removes her clothes to frolic in the ocean, the thing that matters most in the scene isn’t the nudity. It’s the way the light catches her modest curves to make her glow, the way the water glistens on the musculature of her legs. It’s clear that these scenes were shot with respect for the female form – though certainly there will be horny boys in the audience who miss the point and scandalized grannies who remember Bettie from their youth.

Perhaps the most scandalous bit of this story, though, is the lack of scandal itself. Bettie Page might have starred in some of the most lascivious bondage photographs of the 1950s, but she apparently believed that her “costumes” were just innocent fun and that God approved of her modeling up to a point. This naiveté almost makes Bettie a sad character, someone so innocent that she doesn’t know how to help herself. Luckily, Mol makes sure to give her just enough spunk that you don’t feel sorry for her.

Secondary characters come and go without forming clear attachments to Bettie. Postcards to her sister Goldie are filled mostly with “wish you were here” type sentiment, and while the audience can assume the sisters are close, all they know about Goldie is that she’s pretty. Boyfriend Marvin (played by Jonathan Woodward, Joss Whedon’s go-to guest actor) serves only as a catalyst for first alerting Bettie that her pictures are more naughty than she thought, but their relationship is mostly without passion. Fellow model Maxie is nothing more than someone with speaking parts, and it’s unclear whether she and Bettie were close – though you’d think they would be, given the types of light bondage they undertook together.

The two partial exceptions to this would be Irving and Paula Klaw, the brother and sister duo that introduced Bettie to the wonderful world of fetishists. Irving is portrayed by Chris Bauer (seen most recently on TV in Tilt and Johnny Zero) with the delightful nervous sweatiness that would certainly follow a guy who’s trying to peddle smut through the U.S. Postal Service in the 50s. Lili Taylor plays Paula as the tough businesswoman who keeps it together, whether it’s reassuring her models that fetishists are upstanding members of society or convincing her brother that they shouldn’t let a little thing like a Senate investigation interrupt their day-to-day. Even this pair – who were forced to close their business when it was labeled indecent and corrosive of the era’s youth – aren’t given enough oomph, enough zazz to make their story sing.

As a television biopic, this story might have had a chance of exposing something new and interesting about Bettie Page (though it certainly would expose less flesh than the film). Utilizing the cheesy testimonials, unearthed love letters and long-lost home-movie footage so often found on E!, viewers might have learned how Bettie felt about things, or how other people felt about her. The Notorious Bettie Page simply implies how stunning she looked moving through her life, without showing what was underneath.