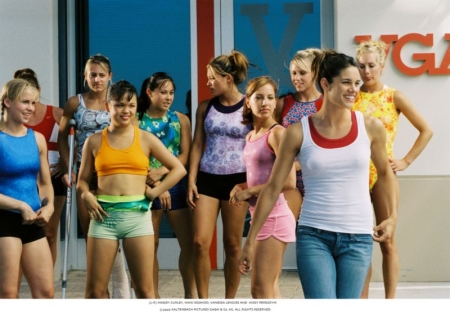 In the last decade, there have been few teen-targeted films that were truly brilliant. Kids these days (she said, sounding like somebody’s grandfather) have not had the honor of growing up with a John Hughes, someone who so thoroughly got the things teenagers experience – the sloppy puppy love, the girl from the other side of the tracks, the basket case who can be pretty with a little mascara and lip gloss. Maybe it’s not cool anymore to stand in the rain, heart on your sleeve, blasting Peter Gabriel as per Cameron Crowe. Maybe, as The OC would have me believe, it really is all about casual sex and throwing good parties.

Six years ago, a movie came along that managed to combine a cute love story with the goofy trappings of pop culture. You might remember it. It was called Bring It On. I’m going to go out on a limb and say that Bring It On is easily the best teen-targeted movie of the last 10 years (edging out my other favorite, 10 Things I Hate About You). It is cleverly funny with lots of snappy dialog. Each role is perfectly cast, from the gay male cheerleader to the cheerleaders from East Compton. The romance between head cheerleader Torrance (Kirsten Dunst) and punk-loving Cliff (Jesse “he’s so cute” Bradford) is darling. And it spawned some of the best one-liners ever. If you haven’t called anyone a “cheer-tator” lately, you should work it into your next conversation.

Bring It On also featured Eliza Dushku in a lead role. As everyone with a pulse and a sex drive knows, Eliza makes even not-hot things hot. What people might not be aware of is that she also has a goofy sarcasm that makes her perfectly suited to this kind of movie, where sometimes it feels wrong to laugh at a guy putting his fingers in places I won’t name here. So wrong it’s right.

I bet that a show of hands would prove that, all across the country, people put down their remote controls when they cruise by a re-run of Bring It On on cable. I’ll bet that a pretty fair number would also admit to getting super psyched at the thought of Stick It, a film about elite gymnastics written by the same Jessica Bendinger who wrote Bring It On. I only hope that those same people didn’t run out and see Stick It on opening day, because they will have suffered the same disappointment I did.

Stick It is not Bring It On. It should be a sin to even mention them in the same breath. Where Bring It On is a fun, fluffy frolic, Stick It is a crass, lumbering zombie of badness.

In Stick It, Missy Peregrym (Jackie from Life As We Know It) plays Haley Graham. Haley is an elite gymnast who turned her back on the sport by walking out in the middle of Nationals after learning her mother was having an affair with her coach. Blah blah blah, tearing-up-family-cakes. She’s now a troublemaker, a tomboy who gets arrested after tussling with a rival motocross gang (don’t ask). As punishment, the judge sends her to a gymnastics training facility, where she will undoubtedly uncover her true passion and remember how much she loves to compete. Let the zany hijinks begin!

The gymnastics community hates Haley, and Haley hates them. She goes through the obligatory rough spell, where she acts out and gets in fights, before her new coach (poor, sad Jeff Bridges) gives her an ultimatum. She’ll both get her act together and compete in an upcoming tournament, or she’s going to jail.

The last half of the film involves training, Haley’s redemption in the eyes of her fellow gymnasts, and a competition in which the competitors decide the outcome in a lame Stand Up For What You Believe in subplot. For a teen movie, there is a surprising lack of hooking up. The only “romance” (extra-sarcastic air quotes) happens so fast you’ll miss it if you blink, and involves one of Haley’s guy friends and her main rival turned BFF on the gymnastics team. Please. Everyone knows that Haley’s guy friends were supposed to see her in her skin-tight leotard and realize she’s super hot, and one of them is supposed to realize he’s been in love with her all along, and then they kiss when she wins the big competition. That’s what a real teen movie would do!

Stick It is not a real teen movie. At least, not a good one. Stick It is to Bring It On what Scary Movie III is to the original Scream – which is to say, it’s a pale, gangly and clumsy imitation. Before you waste your money on seeing this in the theater (maybe it has blessedly already gone away) or queue it up from Netflix, you’d be better served to buy yourself a new copy of Bring It On on DVD. Invite a few friends over for girlie cocktails, pop some popcorn, and remind each other that you apartment is not governed by a cheer-ocracy.