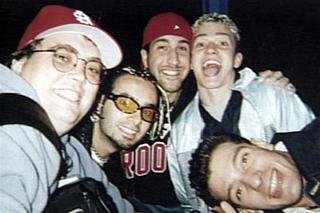 In the illustrious tradition of Jane Magazine’s “It Happened To Me”, popgurls presents… Exercises in Humiliation. Or, *NSYNC: A Post-Modern Love Story.

My cousin Laura, six years younger than me, was the first. We were merciless, my sister Lisa and I, in our superior laughter and unremitting fun-poking. Oh, we had had our dalliances with Top 40 and the early 90s Alternative wave. But growing up within broadcasting distance of the Detroit radio stations, at heart, we were hip-hop girls: scaring our father when we returned the car to him with the volume on the radio pumped, Dr Dre or Ice Cube pounding out of the speakers, the sound fuzzed with distortion from bass cranked as high as it could go. So we saw Laura’s unfortunate tendency toward boyband pop as shameful, at best, and a defection, at worst. And we took every opportunity possible to remind her of it.

I finished college, listening to Prince, the Native Tongues posse, Live, Lyle Lovett, and moved to New York City. One of my best friends was working for the big Top 40 station and got us tickets, complete with VIP passes, to their summer concert. *NSYNC was there. They took the stage and we took the opportunity to desert the concert for the VIP lounge: free drinks, the best strawberries I’ve ever had in my life, and an occasional smirk at the monitors placed around the room. At the after-party, we sat ten feet from the *NSYNC table and made snide remarks about their hair. To this day, Julie swears one of them was checking me out. I try not to think about it for fear of hysterical tears.

Then came Lisa’s senior year of college. Lisa, the smartest, funniest, most independent, and quite possibly the coolest sister I have. Also, the only.

Lisa, who decided to do one of her final projects on the boyband phenomenon. And decided that it had a little something to do with a need for (mostly) girls to be able to work through their sexuality in a safe environment. And a lot to do with ubiquity.

And somehow, through all this, ended up with pictures clipped from teenie magazines, and a sign reading “Mrs. Lisa Chasez,” affixed to her bedroom door. And an uncanny ability to recreate every single piece of choreography from “Bye Bye Bye.” (I should have known right then. An affinity for choreography runs in the family.)

For me, the cracks had started showing the previous summer. We spent much of our vacation analyzing the lyrics to the then-current Backstreet Boys hit. I still can’t tell you what way it is that they don’t want it, and it haunts me. It didn’t mean anything, though, right? Because I had ended up renting a room from my friend and I was only listening on and off to his station out of some sense of loyalty. I’ve always had a frightening memory for lyrics, and a complete inability to not sing along, no matter how much any given singer may irk me, personally.

But I was liking it, god help me.

Then, standing in the middle of a club in Boulder, Colorado, watching as one of the women whose opinion I have always respected most in the world and seven of her closest friends bounced and grooved in perfect unison, shouting “I know that I can’t take no more, it ain’t no lie” with glee, I abandoned all hope of pretense and did what any self-respecting sister would do.

After that, it went quickly. HBO announced it would be airing the Madison Square Garden concert, and I knew I wouldn’t be home for the first hour. I taped it. The concert had only just ended and I was already rewinding to watch from the beginning.

Napster was my best friend. I downloaded all the songs I could find and then started doing searches under each of The Boys names individually. With as many possible combinations of spelling and punctuation of *NSYNC as I could think of.

I was due to make a trip to Las Vegas to see some friends and I realized I was not going to be able to drag my PC with me.I made an emergency lunchtime run to Tower for both albums. Prepped myself to show righteous self-confidence in the face of what would no doubt be sneering condescension from the cashier. Found myself vaguely disappointed when he didn’t even flinch as I handed over my purchases.

Vegas, you see, was the watershed, because it’s when I became not only a fan, but an instigator. I had brought both CDs and the two videotapes I had put together by then with me, and forced them upon every unsuspecting victim to wander through our hotel room door. Poor Amanda and Michelle and Amy and Lisa. Poor everyone. I don’t think we went two hours the entire weekend without watching, or unexpectedly bursting into a song fragment, or taking a dance break. We were on a tear.

So what was it? How could I let this happen? What in the world could have possibly distinguished these five Boys from any other manufactured, saccharine, cookie-cutter group of non-musicians (believe me, I’ve heard them all, and don’t necessarily disagree) out there today, and turned me into this manic, obsessed freak?

Well, it doesn’t hurt that from time to time they have moments where they are not un-hot. Ha. Yeah, okay: JC’s combination of cheekbones, shoulders, and blue eyes does bad, bad things to me. Justin is… 20. Yes. That’s what Justin is. Must, uh, remember that. Lance has transformed into someone I want lick. Repeatedly.

More importantly, though, and what I find infinitely sexier than anything they could possibly wear (or not-wear, given their fashion history), is their attitude. Sounds impossibly lame, but it’s true: I love these Boys because they are inescapably dorky. They do stupid things. Frequently. In front of cameras and audiences and fans, and they do it on purpose. Because it’s fun, and because they can’t take themselves seriously and we can’t take them seriously, either, and they know it.