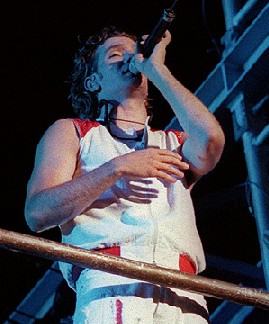 Ever since my wife was taken over by *NSYNC (late October of 2000) I have had to watch a lot of performances by the shiny quintet, both on TV and at the IMAX. And while I have always respected the group’s work ethic and sense of humor, I never understood why a straight guy would be at one of their shows. But while watching the various concerts and TV specials that were forced on me this past year I always noticed a hodge-podge of heterosexual males in the crowds. “Why are they there?” I would ask my wife. It would be like getting a pedicure; no reason to hate them, but why would a guy go get one?

But recently, through a series of events and hijinks too complicated to go into here, my wife and other friends found themselves with a half-dozen extra tickets to the second Oakland show. We had the tickets, I was curious, so I went. But before you start thinking this review is going to end with something like “…And in the end, I found *NSYNC offers something for everyone,” let me assure you that this is not the case.

During the concert I sat by myself in fairly good seats while the wife and her gang sat on the other side of the catwalk in much better seats. On my right was Ramon, whose daughters were also a ways off, and, like me, had an open mind but was a bit confused by the situation. To my left were a pair of teenage girls, Christy and Jenny, who were appropriately excited but mercifully didn’t squeal in my ear much. Since this was show number three [Amanda: Um. Four. :cough: :cough:] for the wife and Melynee, I had a good idea of what was going to happen. While it was kind of fun to share this info with clueless Ramon, it was shameful to know more about what to expect than Christy and Jenny.

I thought that saying “At the start of the show you’re supposed to believe they will appear there, but in fact they will pop up there,” would make me look cool and hip, but instead I felt like a total dork. I probably also knew the new songs better than them since, to my growing frustration, bootlegged recordings had been pouring out of my wife’s little laptop speakers for the past two weeks. No straight man should know these things.

Before I write about *NSYNC, it is important to note that there were no less than four opening acts for this show. One was Joey’s fat dad’s old man boy band, the other was the despised Eden’s Crush and then two other horrible pop acts that I can’t remember. This lasted, like, two hours and felt like eternity. It felt like hell; without a doubt a very painful experience. I put in earplugs about halfway through and didn’t take them out until the end of the concert.

Now on to the show. I was sitting right next to the second stage where *NSYNC made their grand appearance. They were only a few yards away from me and the only thing I could think was that they looked very clear. Which is to say that after looking at them every day, often several times a day, in magazines and on TV, they looked in real life the exact same as they do in various media, but much sharper, with more vivid colors. This insight disturbed me throughout the show. Instead of screaming “JUSTIN!!!! JUSTIN!!! JC!!!! EEEEEE!!!” as girls around me did, I just stood there with my arms crossed or my hands in my pockets thinking things like: “So these are the fellows who are such a part of my life now. Hmmm.. There they are. Just right over there. Yup, that’s Justin. There goes Joey. I should watch Lance a bit since that’s my wife’s favorite. Look, they sent Chris out to do funny skits since he’s the funny one. Clever. He was funnier on Regis, though.”

Also, I tend to get overstimulated in everyday places like department stores, which results in my brain trying to shut down while I stare into space. So, needless to say, I did a lot of this as well during the constant pyrotechnics and laser shows, while Ramon would lean over to me and shout things like “These lights are amazing!! What a stage!!!” and Christy and Jenny clutched each other and hopped up and down. I did realize that I watched Justin much more than the others. I chalk this up not so much to favoritism as to it being just too much work to watch five different people at once while they run every which way for over an hour.

I did like the little Jup Timberlake silent movie that played during “Gone” and I will admit to liking “No Stings Attached” more than I should, and once, once, caught myself singing the chorus to “It’s Gonna Be Me” and promptly shut myself up. Before the show, the lil’ lady insisted – made me promise – that I yell “Y’all know that we came to rock!” during the shouting match with the other half of the arena. When the time came I shouted it twice out of a sense of duty to my wife, since Lance was leading my side and not hers. But after that I just felt stupid and gave up. Sorry babe. I will give you this, however: They ended with a rousing rendition of “Bye Bye Bye” that I did genuinely enjoy. In fact, if Ramon had not been next to me I would have perhaps done a little FPA to impress the teens to my left. It was best that he was there.

I’ll finish by saying this. I don’t know who was responsible for this happening, but the instant it was all over – all three hours of sugar-coated pop bombardment – at almost the very second the band stopped playing and the lights went up, “Going to California” from Led Zeppelin’s IV wafted through the speakers and down to me like the voice of an angel. I don’t know who decided to play that, but God bless you. It was sweet relief and like a cleansing of my soul. Or at least my badly-frayed nerves.

***All pics on this page taken by the author, and owned by PopGurls.com