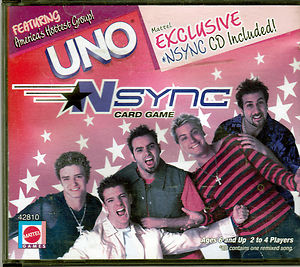 I have long since held that I’m not the worst of the gurlies for one fact (okay, more than one fact, but this is my favorite): I do.not.buy.myself.*NSYNC.toys. Yes, I admit to purchasing a Teen Beat or two – but man, the walls in my cube need sprucing up. And the TV Guide and Big Pimpin’ shoots are too damn good to pass up. (I’ve even managed to impress some folks here by the fact that Joey is wearing a Misfits t-shirt. Or something that at least looks like one.) But the rest? Presents, I swear.

The mini-marionette? From Missi.
The watch? From Michelle.
The NSA cd and baby-blue sparkly winter hat? From Melynee.
The MSG DVD? From Dad.
The pillow? From P at work.

You know… that might just be it. Well, up until last week when Laura sent me a package. Oh Laura, how I love you – wow. First up was the old-school tattoos, or as Melynee pointed out “*NSYNC Tooze.” (Really. That’s what the packaging says.) Poor Chris, for he still looks like a pineapple. Joey is still kinda thin, with that Ross-Gellar ickyness. JC is just odd and Justin looks like he’s nine. Lance, oh Lance, is as goofy as ever. They are the kind of pictures you burn of yourself and hope no one ever sees them. And this is why I adore these boys – instead of burning them, they send ’em out to be temporarily emblazoned on gurlie skin from coast to coast.

But that’s not all! Laura also sent along the *NSYNC fruit snacks. Is it bad to giggle when I get a “Joey” juicy heart? To get all mopey when one bag is only filled with “JC”? To eat the “Chris” one first and then everything else before I get to “Lance”? Because I’ve done it all – and usually on the train. I have no shame.

I looked inside the box and gasped. (Really. I’m so sad.) A JOEY backstage pass! And it’s from the DamnGood!Photo.Shoot. Where he’s got on that blue sweater and his spiky hair is red and he’s all hot, but in a non-chalant way. (Taking a moment. And we’re back…) It’s so great – I need to hang it up in my cube. I would like to say, though, for all you out there incredibly jealous of me – it’s not a REAL backstage pass, as the fine print informs me. It will not get me backstage and it will not even get me into a show. Colour me stunned – the boys aren’t passing out backstage passes in every box of Brach’s fruit snacks? Teases.

Last, but certainly not least, is the piece de resistance: *NSYNC UNO! I have absolutely no idea where Laura found it, but it’s brilliant. Just fucking brilliant. Now, I’m not sure if you, like me, played UNO for hours on end when you were younger. It was a relatively easy game to get the hang of and had no big bulky board to lug around. My brother and I would sit and play with our cousins – smirking with such evilness as we slammed down a “Draw Four” on someone who had just called “Uno” moments before. Oh… oh and that tense round between your call of “Uno” and your next turn when you’d (hopefully) get to throw down your last card and be crowned the winner.

Yeah, UNO Rocks. And I have to say, *NSYNC UNO rocks harder. Melynee and I set ourselves up for a couple of rounds in Starbucks. She snagged us the comfy chairs, which was very cool even if they were accompanied by the scary, sticky table. But we were not deterred. We managed not to peek at the images until everything was shuffled and dealt… I highly suggest this plan of attack if when you get the game. It’s so worth the discovery giggles when you draw a new card.

Because giggle, you will. We deciphered a running theme throughout the pics: 7s are the ‘goofy ones,’ we decided. Poor, poor emoting Chris. Honey, don’t let them take any more pics of you live. 5s are the ‘Puppet Pics,’ where the boys are hanging from strings. Joey is the only one who looks good here. JC looks freaky (as usual) and Lance is just plain odd. Oh, speaking of BigGayLance – whoever did these images had a love affair with Lance and the blur/smudge tool. We couldn’t figure it out – his head always looked like a damn Q-tip. I mean, you can see the spikes, but there is definite smudging going on.

This phenomena was only slightly less odd than the 3s – reallyreallycloseup pics of the boys. As in, they cut off one eyebrow in favor of a full-ear shot. Things we learned: JC needs two eyebrows. He’s freaky with just one. Justin needs two as well, but he’s not as scary. Chris does nothing to refute his elf reputation. He might as well go all out and be a Vulcan. Lance – well, BGL’s head is so big that he’s missing an eyebrow AND an ear. Joey, of course, looks good. Mmm… Joey.

(I should also say here that Justin looks quite good in all the pics. Yet, like usual, there is this schmarmy undertone. This is getting me over any sort of lust issue I might have had – I like confidence, but I’m not into schmarm. I can so see him in 40 years at some tacky bar, wearing a ton of gold chains and hitting on 20-year-old women. Creepy.)

Melynee, the bitca, won both times. There was no love for her. None. Cuz she was all taunty with her “Draw 2” cards. Sure I struck back with a quick rundown of “Reverse,” “Skip” and “Wild Draw 4″s – but it’s not the same. She was being mean and heartless, I was just trying to stay in the game. But I’ll get her back, ‘cuz we decided that we really really need to bring this game to every and all gatherings. It’s the new drug.

The only thing I regret not doing is hijacking the Starbucks PA system. ‘Cuz I would have loved to pop in the EXCLUSIVE *NSYNC CD with the snazzy remix of ‘It’s Gonna Be Me.’ Can you imagine it? Playing UNO, listening to a new *NSYNC cd and sucking down some mochas. Heaven, indeed.

Oh, I almost forgot! The damn Mattel folks have shown how truly evil they are. Apparently with the new *NSYNC Fan Barbies, they’ve enclosed “On Tour UNO” cards. They’re like these strange wildcards where you get to change hands with anyone else in the game. Kinda cool, I have to say. But of course, you have to go buy the damn Barbies. And since I don’t buy said *NSYNC toys, I’m kinda screwed.