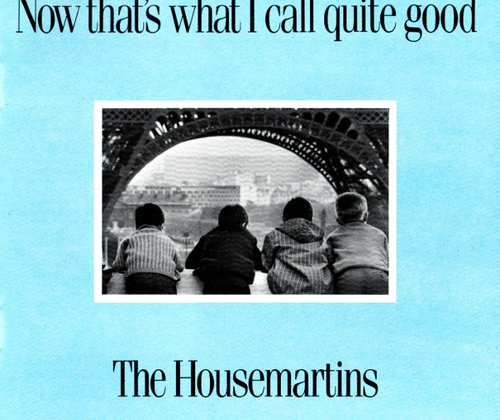 Two Saturdays ago, I turned on my computer to hear my external storage drive make a horrific grinding noise, cough politely and die, taking with it nearly 10 GB of music. This was a nasty blow. I have to admit that in this instance, I cried over spilt milk; rather bitterly, I might add. But I could hardly stand not having music on my hard drive, so I began the process of restocking the library. As I scanned the increasingly dusty shelves of my CD collection, I found that I wasn’t as concerned with replacing the obvious “must-have” hits as I was the odd little gems, those delightful nuggets that I’m always glad to hear. So much great music is easily forgotten, so here are a few I’d almost let slip through the cracks of my memory. Go seek and ye shall find:

Now That’s What I Call Quite Good!
The Housemartins (Go! Discs, LTD., 1987)
Song You Might Know: “Happy Hour”
Song You Should Know: “Five Get Over Excited”

You might still be able to find this Franco/German release on import, which contains basically the best songs from their two albums, plus miscellaneous singles. The Housemartins always sounded to me a bit like The Smiths might have if Morrissey was a little more extroverted and more than a little tipsy. As mentioned above, if you know The Housemartins at all, its probably through the song, “Happy Hour:” Its jangly, upbeat mid-80s guitar sound hides a scathing yet accurate portrait of life in the working man’s world…. Where the haircuts smile/ and the meaning of style/ is a night out with the boss…. Check out “Five Get Over Excited” for an equally accurate and hilarious look at trendy kids – My clothes are black but my bread is brown/ I’m really into early Motown.

Included here also is their version of “Caravan Of Love” – doo-wop harmonizing and all – that was a huge hit single in the U.K. in the mid-80s. If The Housemartins have one weakness it is that Paul Heaton’s thin voice can get a bit nasal and annoying. This is true, in particular, within the context of ballads of which he is, apparently, quite fond. Once The Housemartins disbanded, Paul Heaton continued on in a similar vein (lots of ballads) with a new band called The Beautiful South, while guitarist Norman Cook morphed into the “Funk-Soul Brother,” or Fatboy Slim. But here you’ll find a collection of well-written tunes with a heavy dose of Thatcher-era cynicism on top. (Yikes. Most of these songs are 20 years old!)

Ha! Ha! Ha!
Ultravox (Island Records, 1977)
Song You Might Know: “The Man Who Dies Every Day”
Song You Should Know: Hiroshima Mon Amour

Most people have at least seen the classic video for Ultravox’s hit, “Vienna,” but many are unfamiliar with this earlier, pre-MTV version of Ultravox. Back then, before original band member John Foxx left – to make some fantastic solo records – there was a harder, post-punk edge to their music. When crooner Midge Ure took his place, the band went a bit more pop and shot to MTV fame. Though he missed the fame buffet, lyricist/vocalist Foxx wrote the kind of cold, electronic tunes that manage to be quite emotional all the same, in their bleak kind of way. All that futuristic alienation would make Ladytron or any other of the current 80’s electro-pop revival bands green with envy – in fact, I would bet, they all have this album in their collection.

This is wonderfully illustrated on the opening track, “The Man Who Dies Every Day,” the kind of 80’s synth-pop tune that makes you want to don black clothing, chain-smoke French cigarettes and stare wistfully out the window into the rain, following the shadows. Foxx’s half-spoken vocal portrait of a mysterious stranger, You never drop your façade/ and you never seek relief, moves icily over sparse synth-rock terrain. Best of all is the lovely, wistful album closer, “Hiroshima Mon Amour,”which takes its title from a famous 60’s foreign film and not atomic history. Yet again, the self-absorbed, 80’s alienation is in full-effect, with lines such as, Riding inter-city trains/ dressed in European gray/ riding out to echo beach. Again, break out the black clothes and wrap-around shades. I fear this album is all but forgotten, except for a few freaks, like me. So go buy it, if you can find it.

Replicas
Gary Newman & Tubeway Army (Beggars Banquet Music, LTD., 1979)
Song You Might Know: “Down In The Park”
Song You Should Know: “You Are In My Vision”

Actually, when this was recorded, they were simply “Tubeway Army,” but then Gary Newman had some success with a little song called “Cars,” and subsequent releases have added the “and-the-rest” touch. Well before Newman was riding around on stage in a mini car through dry ice and other such goofiness, Tubeway Army were actually a rocking little post-punk outfit. (Not to mention the black leather and eyeliner!)

There are tight rocking little numbers here, despite their quaint, robotic exterior. (One of the most common criticisms of this kind of music in its day, was that it lacked emotion. Some of the meaner critics actually went as far as to suggest that Newman indeed did believe he was a robot – and who’s to say he didn’t?) For instance “You Are In My Vision,” which has Newman sneering lines like, Fade to scenes of violence/ like a T.V. screen but silent/ where the victims are all paid by the hour, seems like pretty hard-edged stuff; yet not too much later, he busts out the absurdity, Focus on a feeling/ I’ve detected while I’m sleeping/ sing a chorus of ‘On Broadway’ and deny it all. Huh?

Some contend this is their best album and I am inclined to agree. This album gained some recent attention due to The Foo Fighter’s ghastly cover of the Godfather of Robotic Pop songs, “Down In the Park,” but if that’s how you know it, please, listen to the original. Whatever happened between this album and The Pleasure Principle, which contained the single “Cars,” I can’t imagine, but Gary Newman just lost some cool. Maybe it was the little car and the dry ice… Anyway, listen and let the machines rock.

Tin Drum
Japan (Virgin Records, 1982)
Song You Might Know: “Ghosts”
Songs You Should Know: “The Art Of Parties”

Ah, Japan. They are one of those bands that writers for Keyboard magazine often call, “One of the most influential synth bands ever!” Indeed, this particular Japan album is itself frequently placed in the “Top 10 Electronic albums ever made!”

So why do people always ask, “Who the hell are they?”

Well, most of their career was pre-MTV and they also broke up at the height of their fame (1982) to pursue other projects. Sure, if you were a goth in the 80s, you may know their bass player Mick Karn, whose solo albums struck a chord with that crowd. You might even know the solo work of singer/songwriter David Sylvian, but by and large, most people will think you are talking about some obscure Asian band – or the country – when you mention Japan.

Funny thing is, without Japan, Duran Duran’s sound, for one, would never be what it is today. Think I’m kidding? Listen to Japan’s album, Quiet Life (1978), and note how the title track sounds quite familiar. Then go listen to, “Planet Earth” from Duran’s first release. They are one of those influential bands that only their fans and their fellow musicians know.

I could ramble forever about them – E-mail me if you want to Japan chat – but if you are all serious about electronic music, you must own this album.

The single “Ghosts” stayed at the top of the U.K charts for several months in 1982 and is beautiful, lyrically, musically, and absolutely full of drama and pathos. Okay. Dripping with it. Whereas singer Sylvian had previously affected a glam-rock whine on vocals, we now hear that gorgeous hushed bass that would become his trademark. The fact that such an abstract, art-rock tune could top the U.K. charts still seems odd.

On a more upbeat note, the wild swing of the opening track, “The Art Of Parties” sounds like Sylvian crooning over a Chinese orchestra, veering nearly out of control on hallucinogenics. Its jerky rhythms and synth riffs sound more like they were recorded yesterday, rather than yesteryear. If you are an art-rock/Bowie/Duran fan and you don’t own this album already? Shame, shame, shame…

May you never lose 10 GB’s of music, my friend. Though if you do, you may find – as I have – that hits come and go; yet what are most important to your collection are the oddities. What would you miss most?