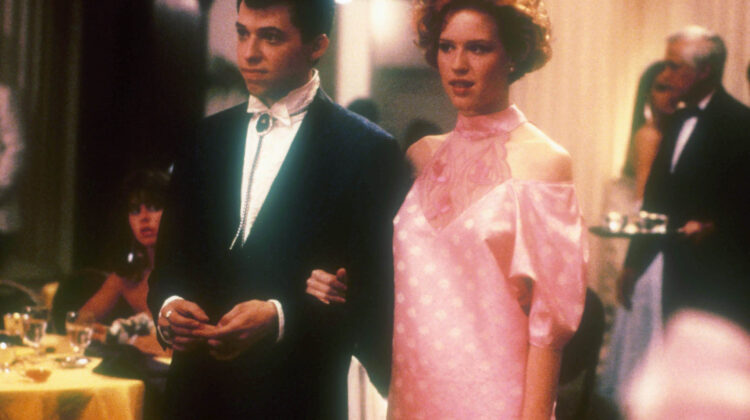 There are times that I wish my life featured a movie montage — usually during some daunting or impossible task. I can picture some amazing, upbeat and inspiring 80’s pop song playing: clips of me doing some sort of work related to the project, friends showing up to help do something, there’s that look of “oh no, I’m not sure we can do this” and then the chorus to the song kicks in and we all jump up and high five and we’re done! The task completed, and I earn all sorts of praise for pulling together and working with friends to make this awesome thing happen.

In reality, the montage lacks music, and the project or task is just as daunting and impossible. Your friends have been replaced by endless cups of coffee and you’ve probably abandoned hopes of getting to sleep before 1am.

When I start to wish my life was like a movie and had a seamless montage to help me overcome challenges, I like to think back on some of my favorite movie montages:

Pretty In Pink
Molly Ringwald’s character Andie is on a mission to stay up all night and make a dress for prom. Yet, only after a few minutes of an instrumental New Order track (“Thieves Like Us”), BOOM she has a prom dress.

Pretty in Pink is one of my favorite 80’s movies, and this sweet little understated montage results in Andie showing up solo to the prom in the dress she spent all night sewing together. She’s ready to stand up to Steff and show Blane that he didn’t break her.

If this were real life, my montage would include me taking a number of sewing classes, learning how to sew and my fingers getting pricked by needles whenever I tried hand stitching something. There would be scraps of fabric and piles of discarded drafts of dresses that just didn’t pass the design stage. It would result in me passing out in piles of fabric with endless cups of coffee next to me. Yet, somehow Andie was able to draw a dress, work out the patterns and piece it together from two different dresses in the span of one New Order track. It’s movie magic… I can’t even get dressed and ready for work in that amount of time.

The Breakfast Club
John Hughes did movie montages really well. In The Breakfast Club (also featuring Molly Ringwald), I’m referring to the scene when everyone just lets go and dances in the library. Set to the tune of Karla Devito’s “We Are Not Alone,” the group releases some pent up frustration through some wildly cathartic 80’s dancing.

An entire Saturday spent in detention with people you’re not exactly friends with is not exactly a dream for most teenagers. How else do you overcome your differences? Through deep, meaningful conversations and of course: dance. If only I could 80’s dance my way out of work meetings.

The Karate Kid
The quintessential 80’s montage! Made all the more epic with Joe Esposito’s “You’re the Best.” I like insanely motivational 80’s jams like this (honorable mention to the theme to “St Elmo’s Fire”).  Playing over the film’s karate tournament that pits Daniel against the Cobra Kai, it really illustrates what makes up any great story. You see the conflict involved, the determination of the main character (despite his own fears) as he’s rising through the ranks of the tournament, getting better and gaining confidence — how can you not feel inspired with a song called “You’re The Best!”? Instead of motivational posters, they should just play this on a loop for people looking for some extra inspiration in their lives.

I could have use a montage like this at work, something to inspire and motivate me to make it through to my next day off.

Ferris Bueller’s Day Off
There were a few times that I faked something to get out of school for the day, but my day off wasn’t as epic as this. Even today, as an adult, my days off aren’t as epic as this. I don’t have the mechanical skills to rig some sort of Rube Goldberg machine to aid me in faking sick and calling into work for my friends. I don’t know anyone with a fancy sports car, and I feel that my luck isn’t as great as Ferris’ was.

This movie features one of my favorite montages: the art gallery montages. We see Ferris, Sloane, and Cameron tagging along with an elementary school field trip; admiring all sorts of different paintings all while the Dream Academy’s cover of The Smiths’ “Please Please Please Let Me Get What I Want” plays for the viewer.

One of the most memorable moments of this scene is when the Georges Seurat painting “Sunday Afternoon on La Grande Jatte” mesmerizes Cameron. The camera’s focus just goes back and forth between Cameron and the child in the painting; it’s a precursor to Cameron’s big “A-HA!” moment. During this montage we begin to see a bit of a change in Cameron, and by the end of the movie, he’s ready to make changes and take control of his life, all thanks to a trip to an art gallery.

Pretty Woman
Yes, Pretty Woman was released in 1990, and yes this list mainly focuses on my favorite 80’s montages, but I still am going to include it. Yes, I’m talking about the shopping scene. This montage itself was featured in a later 90’s movie: Romy & Michele’s High School Reunion, where both characters are watching this scene and proclaim that they are so “happy when they finally let her shop.”

The challenge that Julia Robert’s character Vivian has to overcome is that she essentially needs a new wardrobe. She has all this money and can’t get an outfit. If this were to happen today, Vivian would probably have some sort of status update on Twitter or Facebook and I’d end up reading about it on whitewhine.com. The soundtrack to Vivian’s montage is Roy Orbison’s “Pretty Woman” and features Vivian overcoming her inability to obtain an expensive early 90’s wardrobe. She has a number of sales girls helping her, and is even able to order a pizza while shopping. Something I have never been able to experience while visiting my local mall. By the end of Orbison’s song, she’s ready to go with several expensive 90’s outfits.