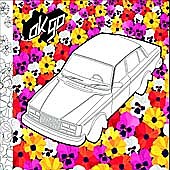 The first time I’d ever heard of Ok Go, they were on stage with the ‘This American Life’ tour at the Town Hall in New York City. Ira Glass deemed them his favorite boy band and mentioned that they were ripe for the pickin’ of any lucky record label. A couple of years later and they’ve got an appearance on Conan O’Brien, a video in rotation on MTV2 and a major label release with Capitol. Not too bad for a public radio backup band, eh?

The self-titled Ok Go album is a rockin’ little collection of bitter snark and a languid dejectedness of sorts. It almost assaults you with a plethora of catchy songs, the first single “Get Over It” exploding in a pop-rock retort to, well, just about anyone who’s ever needlessly whined about anything. “What to Do” wins the award for most memorable lines: Mediocre people do exceptional things all the time, Could’ve been a genius if you’d had an axe to grind. “You’re So Damn Hot” reminds me of Radiohead’s “Creep,” only sung with a self-assured, acidic tongue.

The CD shifts into a distinctively different mood with “1000 Miles,” “Shortly Before the End,” and “Return.” The first two slide in and push you down into this floating world where you so desperately want and need to change the direction your life is going. But you’re on a one-way street and even though the desire is strong, the collision course with the inevitable end is set so you just try to grin and bear it as your car hurdles along.

I’m particularly partial to “Don’t Ask Me” and “There’s a Fire.” “Don’t Ask Me” is a wonderful little kiss-off frosted with delicious animosity, yet never pathetic or over-the-top. And I’m glad to see that “Bye Bye Baby” and “Hello, My Treacherous Friends” made it on from their earlier self-released EPs. Both have a feel to them that’s definitely a bit separate from the newer songs, but the remixed versions blend in nicely with the whole package.

So, Ok Go’s got a solid debut with 11 strong tracks (I skip over “C-C-C-Cinnamon Lips” every time. It makes me itchy.), a whole bunch of critical acclaim and a world of new fans. Not too bad for a public radio backup band at all.