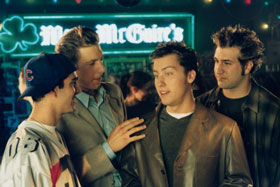 You knew it was coming.

Because, despite all the promotional appearances and marketing blitzes (convenient new girlfriend and all), when you’re sitting in that theatre and the lights go down and the music starts, it’s impossible to deny the truth. Or, at least, it is if you’re a PopGurl.

You’ve heard the company line: how this is a “Boy meets gurl, boy loses gurl, boy tries to find gurl and make with the awkward open-mouthed-devouring kisses” kind of a movie.

What On The Line is, actually, is a “Two boys find their way to one another while their roommates, two other boys obviously in love and settled, play along” kind of movie. And in some scenes, there’s an extraneous gurl.

Not convinced? Let us break it down for you. Eric (GQ) and Randy (James Bulliard)? Together. Totally. They’re cohabiting, for god’s sake! We’re talking longtime companions here, people. You did catch the way they bicker, right? Just like an old, married couple. And in contrast, we’ve got the real love story of the film, that of Rod and Kevin. They’re best friends. They’ll do anything for each other. And in that most classic of movie tropes, spending all their time together, their relationship has grown to a whole new level. Neither of them knows how to tell the other, however. *sigh* And so they exist in a lovestruck limbo; gazing longingly after each other and pining their little hearts out, only truly able to allow themselves to feel joy in each other’s presence, but neither one able to express in words the emotions tearing up their hearts, all while sustaining a level of sexual tension that’s nearly palpable. This is drama, baby! That’s not all, though! We can’t forget about Brady Frances (Dan Montgomery Jr.), Lance’s long-lost spurned lover, reappearing just in time to wreak his dastardly revenge…

Still not sure? That’s okay, we understand. You want proof. Well, we’ve got it, y’all. Those double entendres. The lust-filled glances. Every heated exchange. We broke ’em all out for you.

And, y’know, we haven’t even mentioned the torch Mr. Higgins (Dave Foley) is obviously carrying for Kevin. But see, that’s the thing about slash. Once you start noticing it, you’ll find it everywhere. And you don’t want us to spoil all the fun, do you?