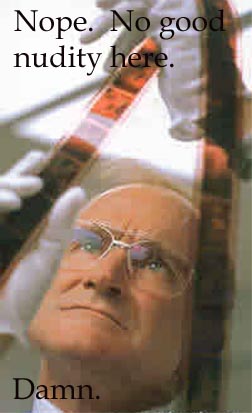 I can honestly say that, while not sure what to expect, this was not it. Though I can certainly see why it is getting raves from reviewers, the average viewers may find themselves squirming in their seats for various reasons. There are the obvious issues at hand: Shots held for a lengthy (in recent movie terms. Damn you MTV!) amount of time of Sy (Williams) sitting. Standing. Drinking water… Etc. Genuinely awkward moments, which are always hard to watch, as Sy tries to reach out and connect with the family he imagines he’s a part of. Sy is a tad disturbed. Not only does he think of himself as “Uncle Sy,” he sits outside their home and imagines walking through it. Using their toilet. Getting caught having broken in, and instantly being welcomed while wearing the husband’s sweater.

More upsetting than these overt signs of dementia is his loneliness, which is conveyed with the long, empty shots of the Sav*mart he works out, his sterile apartment, and in the desperate way he has decided that the Yorkins are his family, whether or not they know that. An entire wall of his apartment is covered in the Yorkins’ family pictures. Every picture he’s developed for them, over 10 or so years, is there. He carries their photos around like they’re his family. He has one of the Yorkins’ son in a frame on his nightstand. The Yorkins barely know Sy’s name, and when we first see Sy and Mrs. Yorkin together she looks decidedly uncomfortable, and Sy knows this, but desperately does not want to believe it. He is more than slightly unhinged.

And the symbol of his pitiful trapped existence is his pet hamster. The hamster goes round and round on the wheel and his one joy in life is the water that Sy doles out to him which he quickly scampers over to get. Did I feel the symmetry of Sy in his empty apartment and trapped life and the hamster on the wheel, waiting for water? No. I thought, well, it’s own damn fault he’s lonely! What’d he get a fucking hamster for, when he could have a happy, bouncing yellow lab greeting him every night when he gets home?

The Yorkins, the objects of his deranged affection, in the pictures seem like the perfect family, which is why Sy latches on to them. (Or, at least, this is why we are to assume. Perhaps he fell in love with Mr. Yorkins’ forehead. Or Mrs. Yorkins full lips. Who knows, who cares? That was the most irritating thing to me. Well, other than that a Target-style store seemed to anchor a mall. We get no insight on what happened ten years ago that caused Sy to obsess about this family in particular. At the beginning of the movie, Officer La Salle asks Sy how this all started, and I really was expecting some revelation by the end. Even if it was just a flashback of the wife – whatever the hell her name was — showing him some kindness when she was pregnant with Jake. Something. Anything! But if you go see this movie, don’t wait in anticipation of this ever being explained. Because it isn’t.) Sy lives in a lonely world of malls and yellow halogen lighting and long, drawn out shots of himself looking morose. It would be enough to drive anybody mad. I was going mad just sitting there. This empty existence required Sy to find happiness elsewhere, and he found it in their smiling photos. As soon as there was a crack in the veneer of that perfect existence, Sy lost that precarious grip on reality we all cling to. He starts to lose it, and so does the movie.

And it all starts with the crack in his car windshield. Those pesky cracks tend to spread, apparently right into the rest of one’s life. If this is not the type of metaphor you’re into, this may not be the movie for you.

And herein lies the crux of my problem with this movie. Not the issues of loneliness. Not the long shots that made me wish for the next scene. It was Sy’s total and complete breakdown. Sy had issues. We knew this going into it. The first time you see his excitement at Mrs. Yorkins’ entrance to his store, you know he’s not mentally balanced. He’s like a kid in a candy store. At the end, he’s a wretching, screaming, knife wielding man spitting out demented orders and alluding to a history of abuse. To say it came out of left field might be a slight exaggeration, but not by much. For this to have worked, we needed to see more of Sy’s past. We needed to believe that he was damaged by more than mall food and track lighting. Nothing we saw made us believe that his parents did what he wanted Eriq La Salle’s policeman to believe happened to him. Perhaps this was his clever way of making a plea for treatment, or his way of getting off easy. Claim insanity. Get pity. Work the system. It happens. However, in this case that clearly isn’t the conclusion we’re supposed to come to. The final shot of Sy pleading with La Salle’s officer for his photos and his scrambling for comfort in them tells you that. It should have been left out and the viewers should have been left to decide for themselves what could have turned a seemingly innocent, harmless old man into an obsessed lunatic. Or alluded to a troubled past throughout the film. Having him tell the Yorkins’ son about his sickly childhood doesn’t count. Sometimes not knowing is much more terrifying.

Another, much more important issue I had with the movie, besides the fact that I left feeling like I would never trust creepy old men again? Gary Cole is in this movie. Gary Cole of Office Space. Playing another corporate-type manager. I don’t know about the people with me, but every time he came on screen, I expected him to say “yeeeeeeeeeeeah…” while holding a coffee cup. I not only expected it, I needed it. Desperately. And it never came. I still carry the disappointment with me this morning.

The big issue I had with the movie (other than my issues with the nude scene, of course) was that it is written and shot in such a way that any sympathy we might have for any of the characters was meant to be directed to Sy. The other characters are not developed in any real way, and other than the wife (who’s name I can’t even remember, if that tells you anything about her development), at no point did I find myself caring about them. I’m sure that’s intentional. I’m sure the filmaker meant to do this big artsy thing and turn the expectation for these films upside down by trying to align our sympathies in some way with the psycho guy, rather than the nice, sweet family. But, of course it doesn’t work. Because he’s a psycho guy! I just couldn’t muster up a bit of sympathy for a deranged psychopath (see above re: hamster). And possibly the filmmaker forgot that a big part of a suspense movie is the suspense. And if you don’t care about the characters, you don’t feel a lot of suspense for what happens to them. Instead, you feel more like, eh, maybe they’re alive. Maybe they’re dead. Whatever. Aspiring filmmakers: make a note of this when you’re thinking of being creative.

And the nude scene? I’m sure Vanessa’s more disappointed over that than I was with Gary Cole’s inability to amuse me. It’s not worth it ladies, there’s nothing to see. (note: this is not a diss on the forehead, it’s shot in a way that you see nothing.)

Surely they could have found a way to sneak in a happy passionate sex scene earlier in the movie so we could enjoy a bit of Vartan nudity. Give us something for sitting through this thing! In fact, we see more Robin Williams-style nudity than Michael Vartan-style nudity, and there’s just something inherently wrong with that. In fact, that may make the movie more disturbing than anything else in it. As eiddy will attest, I spent much of movie poking her and saying “this is not the nudity I came for!”

This is no joke. Not that I don’t agree with her, but I have bruises on my ribs. Keep it on, Robin. For all our sakes.

To add to the fact that there is nothing there, you are treated to a Sy that has completely melted down, holding a camera and a hunting knife. I’ll let your imaginations take you the rest of the way. Just stick to fanfic. It’s much more fulfilling.