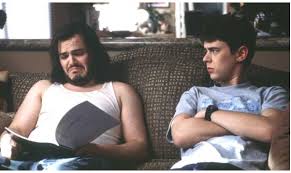 Orange County officially opened this weekend, but I actually saw it a couple of months ago at a test screening in San Francisco. Even though I am over the target age for the movie (MTV films wanted everyone in the audience to be between 13 and 21), I managed to talk my way in, because there was no way I could not be a part of Colin Hanks’ first lead role on the big screen after seeing him killed off and then cruelly brought back for bad dream sequences on Roswell. But it’s possible that they were right about the age thing, or maybe I’m just a bitter twentysomething, because I sat in that theater in front of crew, writers and producers, and seriously thought that Hanks was better off in small-screen New Mexico.

The movie I saw—remember it was a rough cut, so what is actually in theaters today might be a little, or drastically, different—began with Hanks’ character Shaun writing a letter to his hero, a writer whose book caused Shaun to give up surfing, blow off his friends and try a hand at writing a novel himself. The writer in question is in residence at Stanford University, and despite his mother’s dependence on him and his girlfriend’s puppy-dog pleas for him to go to a community college with her, Shaun applies there as well, sending along with his application a novel which satirizes the people in his drab life at home in Orange County, California. Skip forward through an inappropriately humorous death of a friend, seemingly one hundred performances of the cheerleading squad to Crazy Town’s “Butterfly,” and a lot of scenes in which Jack Black (as Shaun’s brother Lance) gets stoned in his tighty-whities, before we finally learn that Shaun didn’t get into Stanford.

Hence, the “plot” of the movie revolves around him trying to talk his way in to the school, which eventually leads to the Deeper Meaning: Home is where the heart is. Or, more likely: You can choose your friends but you can’t choose your family.

There were a lot of subplots.

Carly Pope (Popular, may it rest in peace) is the captain of the cheerleading squad, the granddaughter of a member of the Stanford Board of Directors, and a big slut. In some of the most tasteless parts of the movie, Pope’s character is shown in a series of flashbacks making out with her best friend’s boyfriend, Shaun’s two best friends at the same time, and a butch female janitor, because she got really drunk at the prom. I imagine that the people involved with creating Orange County were going for titillation on the scale of Neve Campbell and Denise Richards in Wild Things. What actually made it to the test screening resembled the kind of unsatisfying Adult Feature they used to show on Cinemax late at night.

Shaun’s girlfriend, Ashley (Schuyler Fisk), is such a caricature of the sensitive, Save the Whales, wanna-be marine biologist that it is impossible to take any emotion she has seriously. Why would any viewer want Shaun to skip out on an excellent education to stay home with this horribly boring girl? There is no reason, not even when he loses his virginity to her in the back of his brother’s ancient SUV. Why? Because his brother is the aforementioned Jack Black, he’s still in his underwear, and he’s asleep in the front seat. Romantic, eh? Ashley is weepy and doesn’t think Shaun really loves her (again, he probably doesn’t, and why would he?) and has a Moment of Truth that she wusses out on in the end.

Shaun’s mother, played by Catherine O’Hara, is an equally rote interpretation of an alcoholic divorcee who can’t bear for her only good son to grow up. She’s divorced John Lithgow, married an old codger for his money, and innocently goes out of her way to assure that none of Shaun’s plots to get into Stanford succeed. It is implied that she is also a slut. Lithgow is the rich father who has never paid his son enough attention, and married a Playboy Bunny-type decades younger than him. I swear. Orange County is every poorly written stereotype in every poorly written stereotypical situation.

And then there is Shaun himself, trying desperately to get into Stanford first through blackmail, then through good old-fashioned begging, then by sucking up to the writer who inspired him to go there in the first place. Along the way his drug-addict, Hanes-wearing brother manages to get the Dean of Admissions high and burn down the admissions building.

Hanks has the potential to be both charming and funny. He somehow managed to escape his father’s nose, while inheriting his lanky build. I’m willing to bet that he’ll grow into the same comic timing. But even so early in his career, this is beneath him.

To be fair, Orange County tested really well against its target. While I sank lower and lower into my seat, wincing at the non-humor of it all, the audience around me roared with laughter. Maybe I just didn’t get it.