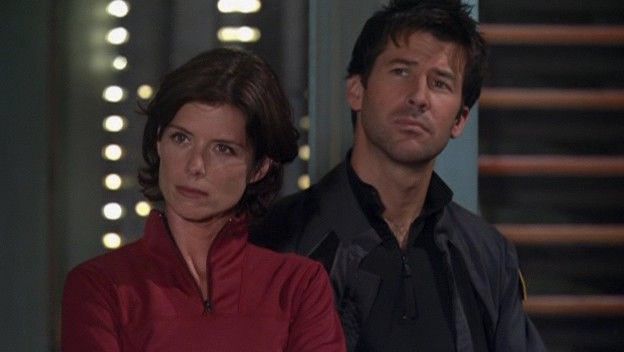 As an avid consumer of media (books, movies, TV shows) I’ve had many favorite pairings or ‘ships, but I never really understood the concept of One True Pairing (OTP) until I met these two:

In brief, this show was a spinoff of Stargate: SG1 which was itself the TV spinoff of the movie Stargate. SGA, as it’s known, is about an expedition to find the lost city of Atlantis, which is in another galaxy, go figure. Dr. Elizabeth Weir, civilian, diplomat and negotiator, leads an international cast of characters on this trip. John Sheppard is a Major at the start of the action. Thanks to the discovery of the creepy vampire space aliens who are the bad guys in that galaxy, he ends up the military commander, so John functions sort of as Elizabeth’s second-in-command.

Because of the situation, the two are friends – eventually close friends who are each other’s family – and co-workers with nothing more than some subtle flirtation going on occasionally. Such a relationship is ripe for subtext, though, and within the first half of the first season this pairing utterly captured me and a lot of other people. A friend of mine had a coworker (male, for the record) who watched the show, who without any prompting from her once observed that Elizabeth and John “totally had a thing” going on.

There are five particular areas of the show that made them my one and only (so far) OTP.

Or, as the Weir/Sheppard fans call it, the immense amount of eye!sex.

These two look at each other all the time. Big whoop, right? But the thing is, the show’s camera work and editing make a big deal out of a lot of these looks, because Elizabeth is the boss and John is the military commander. When Elizabeth and John look at each other, the video cuts from one to the other while Scary! Music! plays to emphasize the Big! Danger! of the moment, or what have you.

You know it’s a dramatic cliffhanger when the two of them start looking intensely at each other. They also glare when they argue, and then share amused looks at the antics of their coworkers, who sometimes resemble hyperactive five year olds.

Elizabeth, as the person in charge, spends most of her time somewhat isolated from everyone. So one of the reasons why this pairing took off is that she spends more time on screen with John than with anyone else. As the first season arc concluded and the two of them began to trust each other and act more as a united front, the personal space between them kept shrinking. A lot of scenes were walk-and-talks where they were side by side, or John was trailing after her like a puppy. Then there’s Elizabeth’s office – most people sit in the chair across from her, but John sometimes parks himself on the edge of her desk instead.

Let’s face it: life-saving can be a really easy way to start shipping two characters. Stargate: Atlantis being a science fiction show with creepy vampire space aliens and other assorted bad guys, mortal peril is a regular plot feature, so there are lots of chances for life-saving activities. However, there are more subtle issues at play here.

On the score of straight up life-saving, the two-part midseason episodes “The Storm” and “The Eye” in the very first season involves a group of bad guys invading the city. They take Elizabeth and Rodney McKay (the head scientist) hostage, and John has to go all John McClane to save them and the city.

First John offers the terrorists a trade to save Elizabeth’s life. The terrorist leader lies and says Elizabeth’s dead. John’s response is a chillingly cold “I am going to kill you,” and he then spends a good half the episode mass-murdering the bad guys until the leader finally has to admit Elizabeth’s not dead. After which point John has to shoot the leader, who is holding Elizabeth in front of him as a human shield.

Then, when he asks “Are you okay?” Elizabeth breaks her professional cool, admitting to him in a shaking voice, “No.”

John replies, “You will be,” then takes her hand and leads her away.

And that’s just the first rescue.

Actually, before that, in the third episode “38 Minutes,” Elizabeth stubbornly insists on getting John and the rest of his team back safely, despite intense time pressure and all the odds being against them. This is how Elizabeth’s rescues generally work, because she’s usually back home while John is off exploring. But she does go to rescue him in person more than once.

There’s also the fact that the show starts with John serving in Antarctica, not exactly a plush assignment, and having some mysterious black mark in his service record. When Elizabeth insists on him joining the expedition, she saves him from that “exile” to start with.

In the pilot, John is slightly better than a stowaway on this expedition to find the lost city of Atlantis. He has a genetic mutation that allows him to use technology. Elizabeth is leading the expedition, and she’s the one who convinces John to go and gets his military superiors to go along with it. She trusts him, even though John is very unsure of himself and unsure about the mission. The pilot episode involves some catastrophes, and John ends up not as a tagalong, but in charge of the military side of the expedition.

Elizabeth and John argue. A lot. Beginning with a big fight in the pilot and continuing for a good portion of the first season. And yes, for shippers, that can be a gold mine of subtext. The two of them also gradually begin to understand each other. In between arguments they save each other’s lives a few times. Then at the end of the season, in “The Siege Part 2,” John risks his entire career to back Elizabeth up against the powers that be. Elizabeth trusted him, now he trusts her.

It’s a rare thing for any show anywhere to build a relationship like that over an entire season and do it intentionally.

The trust theme keeps going. In later episodes John talks Elizabeth into taking risks that she is reluctant to take, largely because she trusts him. When he gets infected with a virus and begins mutating into a monster, Elizabeth walks unarmed into his room alone. Twice. Not the smartest move, maybe, but an expression of trust. When Elizabeth is trapped by an alien technology and convinced Atlantis is an illusion, it’s John who brings her back.

The two of them honor each other. What I mean by that is that they don’t act out of selfishness when the other person is concerned, and instead respect the other person’s wishes. In “Common Ground” John is taken hostage by one of the villains, who wants to trade John for a third party (presumably to kill that person). John uses his one chance to speak to Elizabeth and the rest of the expedition to tell them not to cut a deal. Elizabeth doesn’t — even when she has to watch John being fed on by a starving alien space vampire. She hates it, but she doesn’t give in. (She does, however, go against her general desire to avoid conflict by ordering a rescue team to go in there and get John the hell out by any means necessary.)

In the season 4 premiere “Adrift,” Elizabeth is dying but they have a technology that could save her life. However, based on Elizabeth’s past experience with this technology, there’s no way she would want to go through that. With Elizabeth hurt, John is both effectively in command, and functioning as her next-of-kin. Even knowing it means losing her forever, he tells the others not to use the technology. The scientists, unsurprisingly, ignore him, use the thing and heal Elizabeth, who is exactly as horrified when she finds out what they did as John thought she would be. This episode would seem like a goldmine for shippers, and it is, but unfortunately it’s also right before the show wrote Elizabeth out and she became a recurring character who appeared in a couple of episodes in Season Four, and none in Season Five, so it’s a rather bitter milestone.

I was heartbroken and furious, in the way only an OTPer would get, when Elizabeth was no longer part of the show. It killed my enjoyment, taking what was the heart of the whole thing out of it for me. I hadn’t entirely realized how invested I’d gotten in the development of this relationship until it was taken away. I don’t know if any other pairing will ever have this level of power over me again, but now I get the passion and energy people pour into a single pairing that just happens to hit every button you have, and be a relationship that fascinates you so much that you spend hours talking about it to anyone who will listen.

Thankfully, there are DVD sets, reruns, an awesome fan community that persists even with the show off the air for three years (we celebrate the pairing in October each year), and proselytizing to potential new fans.

Season One: “Before I Sleep”

This is really mostly an Elizabeth-centric episode, where they discover an alternate version of Elizabeth who is 10,000 years old. It’s on the list for a few reasons, number one being the opening. Elizabeth is stealing a moment for herself when John appears and gives her a present. Apparently it’s her birthday, which she hasn’t told anyone about, but he found out somehow. This has been the grist for many a fantasy and fanfic. Later John stays with Elizabeth as she keeps a vigil at the bedside of her dying, alternate self, comforting her.

John gets infected by a virus and starts mutating into a monster. Not a complex plot, but Elizabeth and John have some funny conversations at the beginning about her terrible bedside manner. She also keeps going into his room as he gets more and more dangerous, her blind trust in him is an admirable, if foolish trait. When the new military commander orders the men to hunt John down and stop him with force if necessary, Elizabeth contradicts the order in front of God and everybody and orders them to retrieve John alive and unharmed (and the rest of the team follows her orders – the new guy isn’t exactly popular).

Elizabeth gets infected by alien machines that try to convince her the Atlantis expedition is a delusion, and that she’s been in mental institution on Earth the whole time. While she struggles with confusion in the fantasy world, John and the others on the team are trying to find a way to wake her up. Why it’s so good: John’s eventual solution is to walk into the isolation tent and risk getting infected himself in order to touch Elizabeth and thus communicate with her and get her to fight off the alien presence. Which she does, and there’s an adorable, awkward conversation at the end of the episode.