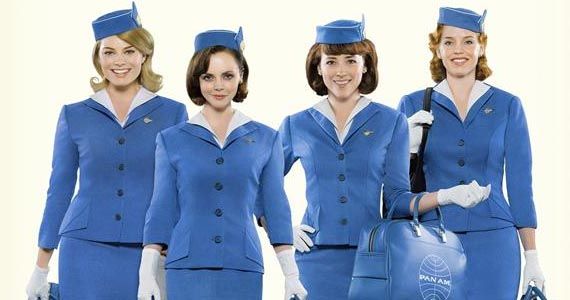 A few weeks into the 2011 television season, a friend told me I had to watch ABC’s Pan Am. This wasn’t in my plans, as I had no interest in the show. From the ad campaign it seemed similar to The Playboy Club on NBC (which had already been cancelled), and I wasn’t interested in television that took the approach of “we can totes be sexist and it’ll be okay because it was NORMAL back then!” It’s not like there’s a shortage of sexism on TV that’s set in the present. I don’t need it included under the nostalgia defense.

But my friend has very similar tastes to me, and a good eye for quality. She insisted I should watch, and that the ad campaign had very little to do with the show itself. So I watched the pilot when it reran and HOLY SHIT IT WAS AWESOME!

I mean to say, the pilot, unlike a lot of pilots, drew me into the story within the first few minutes. By the time the first commercial break came up, I was hooked. The characters are compelling and the women are unique, well-defined, rich and talk about a lot of things beyond men.

The show’s nominal star is Christina Ricci as Maggie, who is a bit of a troublemaker. When we first see her, she’s at home because she’s been suspended for not wearing her girdle. In the second episode she mouths off again to the woman running the weigh-in and inspections, nearly getting herself into more hot water.

But Maggie is only one of the four women and the show shares time pretty equally between them. My favorite so far is the French-born stewardess Colette, and the actress who plays her, Karine Vanasse is really amazing. I just really feel everything she’s feeling all the time. In the pilot, Colette discovers a fling she had in Rome is on her flight, and whoops, he’s married and neglected to tell her. When Colette admits this to Maggie, she attempts to be the bigger person and dismiss it and then there’s a pause.

Maggie: “So, are we spiking his food or his drink?”

Lest you think the show is entirely about four pretty stewardesses talking about men, the other two main characters are sisters, Kate and Laura (Kelli Garner and Margot Robbie). Kate drove the getaway car when Laura bolted from her wedding a few months ago. There’s a lot of family drama with their mom, and as a Bechdel-test-passing bonus, Kate has been recruited to work for the government as a spy (unbeknownst to anyone else, including her sister). This is supposedly based on true stories of female flight attendants who did in fact work for the government during that time, so it’ll be interesting to see what kind of world events get brought up as the show progresses.

But the second episode managed to actually be better than the first, and something happened at the end that astounded me.

In the second episode, “We’ll Always Have Paris,” Maggie has a customer on the flight who is aggressively coming on to her, both with inappropriate comments and leering. She’s dealing with it professionally until he follows her into the work area where the curtain is drawn and attempts to rape her. There’s no mistaking it his actions — the guy is presented as thoroughly predatory the whole time and it’s very clear what he’s trying to do. The writers didn’t soften it at all. Maggie struggles, manages to grab a utensil and stab the guy in the side with a fork, forcing him to back off.

The other women are alarmed about this, with Colette pointing out that they have to take care of this passenger before he can report Maggie and get her fired, but eventually the co-pilot, Ted, gets involved. Ted had not been developed much at that point, but he has a bit of a loutish streak that comes out sometimes. The passenger complains that Maggie assaulted him and Ted tries to sweep it under the rug. He eventually talks the guy into not filing a report, promising he’ll “handle” Maggie and then ordering her to bring the man a drink “with a smile.” Maggie looks daggers at him but she has little choice.

At the end of the episode, Maggie gets to her hotel room to find Ted has sent her a “present” – a baguette with a fork stuck in it, which he thinks is funny. There’s a moment where it looks like Maggie is going to laugh at the present and this is all going to be “just one of those things” that happens. But Maggie turns to Ted and says, “I know what my job is. For the price of their ticket, businessmen get to flirt with pretty women. But I can handle flirts. I can handle the personal grooming checks, the weigh-ins, the boozy jerk who crosses the line. But what I can’t handle? Is that you made it okay for him to try that again with another girl.”

Then she shuts the door in his face.

I was gobsmacked. My jaw was in my lap. I did NOT expect any show, especially this show, to go there, to flat out say “You are enabling rape culture by what you did.” I can’t remember seeing that in another show any time recently, at least, if ever.

Later episodes have been a bit more soap opera-style at times, although Colette continues to be amazingly awesome and Kate’s job as a spy keeps getting more complicated. The show is unfortunately not doing well in the ratings, and on the brink of cancellation. But even if it does get canceled, that one scene needs to be immortalized forever as a moment when a TV show got it right.