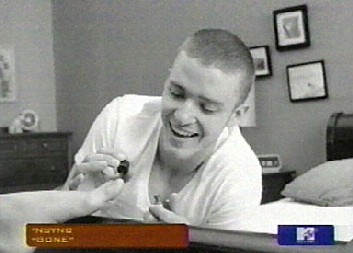 We figured we weren’t the only ones to read articles about female sexuality in men’s magazines and think, “What the fuck?” Sometimes you have to wonder if the people who write these stories have ever gotten laid, so trite and stereotypical is the advice. When Maxim offered a tutorial on “How to Rub Her the Right Way,” we couldn’t resist trying it out for ourselves. Here’s how it worked out for us.

Body Part: Scalp
They said: “Women love to have their hair caressed, pulled, touched and played with.”
Amanda says: Okay. This is true, for me, but it does not have sexual connotations. I beg to have my scalp scratched often, whether we’re sitting around on the couch watching TV or in bed trying to fall asleep.
Michelle says: Agreed. It’s more of a relaxing thing than a hot-and-bothered thing.

Body Part: Flanks (or sides, for the confused)
They said: “Use long, slow continuous strokes with the palms of your open hands, circling at her hips and coming back up to where you started.”
Amanda says: I thought I would be ticklish, but that wasn’t the case. Instead, it made me wish I could purr, and then made me want to go to sleep almost immediately. This is very soothing, but not very sexy.
Michelle says: I can purr – at your heart out Amanda. And this one is purr-worthy. I like it, a lot. But can I suggest trailing your finger tips instead of using your palm? Makes a world of difference.

Body Part: Sacrum (the bony plate where the spine meets the ass)
They said: “Use your fingers to rub its surface and around it’s edges.”
Amanda says: There is a reason this is the place I chose to get my tattoo. It’s extremely sensitive, and I love to be kissed here. It makes my toes curl – in a very good way.
Michelle says: Hmmm… maybe my sacrum is defective. There was no toe curling. It sort of tickled.

Body Part: Back of the Knee
They said: “Because of its odd location, her kneepit is touched less often than a leprous nun in solitary – so it’s ultra-sensitive.”
Amanda says: Because of it’s odd location, it’s hard to find a sexy way to get to it. Unless you’re already lying on your stomach, it’s hardly worth turning over for (unless, you know, the small of your back is getting some action, too). Generally, I have found that this is a place men go for when they are trying to show you that they can be sensuous. It’s sort of like renting a chick flick, to prove they can cry. I think it feels odd to be licked there, and would much rather get attention in other places.
Michelle says: Yeah, no, my kneepit didn’t seem to feel like it had been neglected. This one is sort of not necessary. But bonus points for trying.

Body Part: Ears
They said: “Roll the edge of her ear between your forefinger, middle finger and thumb, going back and forth from lobe to top.”
Amanda says: This only works while you’re kissing, otherwise he really should be nibbling on the earlobe and not squeezing it between his fingers. When I read this, all I could think was that some totally inept man was going to hurt his poor girlfriend by gripping too hard while concentrating on using the correct fingers.
Michelle says: What the fuck? Um, no. It’s distracting.

Body Part: Pulse Points (and inch or two under the earlobes and just under the jaw)
They said: “To find them, feel around for her pulse… which, at this point, should be racing faster than an Indy car.”
Amanda says: Maxim recommends using three fingers (exactly three, I wonder why?) to rub small circles on these special spots. It sounds way more sensual than it was. I’d rather have lips and a tongue in these places any day of the week. It’s very strange to lie there while someone massages the skin above your pulse.
Michelle says: Perhaps I would’ve liked this one better if I was being massaged with lips, instead of three fingers. It’s kind of oddly creepy.

Body Part: Toes
They said: “Applying pressure with your thumb, trace a line from the top of her big toe down into the webbing between it and the second toe. Continue – all the way down to the little toe.”
Amandaa says: No. No one touches my toes. Feet are icky. And ticklish. And no.
Michelle says: While I wouldn’t mind someone touching my toes, my boy is anti-feet. Severely anti-feet. So, sadly, this one was a no go. But, I don’t really find someone rubbing my “webbing” very sexy anyway.

Body Part: Inner Thigh
They said: “You can grab handfuls of flesh and knead it, almost as if you were kneading dough.”
Amanda says: Yeah. That sounds really sexy. Dough. Women don’t have issues with their thighs or anything. Morons. All that aside, and minus the kneading, this is a fantastic spot. I’d recommend gentle petting or kissing, and it’s a great precursor to. Other. Things.
Michelle says: Inner thighs are your friends men. Really. As long as you never, ever use the terms “dough” or “kneading” when discussing them. Once again, I’m a fan of the trailing fingertip approach here. A big fan.

So, all in all, the Maxim folks aren’t completely off – and they’re serving up much better tips than their Cosmo counterparts. But make the moves your own, kids, and remember – women don’t like to be referred to as “dough.”