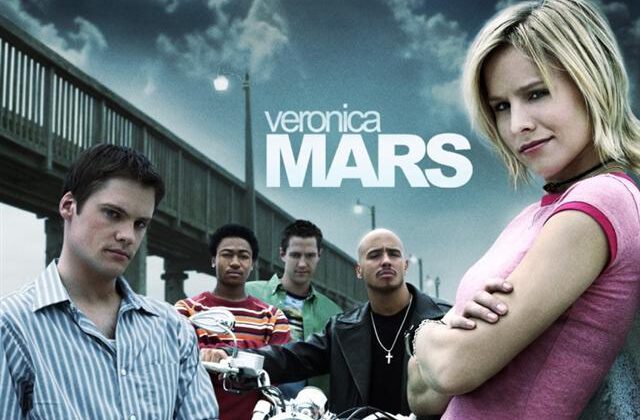 For those who haven’t yet heard it shouted from the rooftops, Veronica Mars has been renewed for a second season. It’s an unprecedented move for UPN to renew a show so early, much less one with such dismal ratings. But it’s to UPN’s credit that they’ve listened to not only the critics in their raves aboutVeronica Mars, but also to the fans who have been relentless in their outpouring of love and devotion for one of the smartest and truly engaging series on television. One that not only delivers up a mystery worthy of Laura Palmer’s demise, it never fails to treat its audience as intelligent folk who like the chase as well as the prize.

I caught up with the cast after their appearance at Macy’s in New York City, the day after creator Rob Thomas leaked the news of the show’s renewal to Television Without Pity. The cast is a group well accustomed to show promotion, doing appearances and signings in several states for the fans who keep coming out in droves – with the NYC crowd being their largest draw by far. And it’s those fans and their passion that keeps Veronica Mars alive – a fact that is not lost on the cast. You’d be hard-pressed to find a more sincerely gracious group of people, not to mention tremendously funny.

Congratulations – I heard the news about your renewal this morning and was absolutely thrilled. When did you hear the news?

Teddy Dunn (Duncan Kane): Last night at ten o’clock we got a phone call. It’s funny, nobody was picking up their telephone because we were all out to dinner and I was the only one that picked up. It was Joel Silver and Rob Thomas and they were like, “hey, how’s it going?” and I [thought], “Oh my god, what’s going on? Am I fired?” [That’s when they said] that we got picked up for a second season. I freak out, they ask “Where’s everybody else?” [The rest of the cast had] literally all just walked off the elevator as I had picked up the phone. [Silver and Thomas wanted] to talk to everyone, so we just passed the phone around and that’s pretty much how it went.

Enrico Colantoni (Keith Mars): I still owe them a phone call. Joel Silver left a message and I’ll get back to them later. He seemed so excited when he called – he wanted to tell everybody in person. I’m going to call them on Monday and say, “What? What? What’s going on? WHAT? How come no one told me?”

If you had to make a blooper reel, what moment would make it on?

Francis Capra (Eli “Weevil” Navarro): Definitely episode ten [“An Echolls Family Christmas”]. The poker game. Everybody had to strip down and get naked except for me. At one point, [Teddy and Jason] go off camera and they came back sticking their bellies out, making it look like they had big guts. And I came back in and actually had the biggest gut of all – just three shades darker than these two guys. It was an astonishing sight. (room laughs) These people who all are writing in saying “Jason’s so gorgeous” and “Francis is this” and “Teddy is this” — if they would have seen that reel, I think they would be sending us gym memberships. (room laughs)

A lot of us slip into other character forms – like, (affects accent) I just love to deliver Weevil’s dialogue as if he were from Greenwich Village. It’s a real hit with a lot of the crew members. Me and Jason mess around a lot. If they were to catch some of the stuff we say before we go into serious scenes…

Jason Dohring (Logan Echolls): Some of the funniest scenes – I don’t know, probably Kristen doing her little “Kristen’s Bonus” [dance]. I probably say “fuck” a lot more than anybody else on the set. After a take, it’d be like: Cut – “fuck” – Print – “FUCK!”

Percy Daggs III (Wallace Fennel): Oh man, blooper reel? Probably Kristen Bell adjusting my duct tape, if you know what I’m talking about. No, I’m just kiddin’, I’m just playin’. My blooper reel might be the mascot episode [“Betty and Veronica”] — it wasn’t on tape, it wasn’t anything on camera. My little brother and I were racing around the basketball court and we were timing it and everything because my brother is the real Fennel – he plays my little brother on TV, my real life little brother – we were racing, we were running around and I was just doing my thing and I took a nice little tumble and slid about 20 feet. Other than that, we’ve had a lot of funny moments here and there and I can’t point one out.

Francis: I’ve had two lines this entire season with Enrico and I couldn’t stop laughing. This man is a blooper reel.

Francis: When people are laughing at us, usually Enrico is there.

Enrico: I love [the promos]. When we’re promoting the UPN across America, each one has their own little catch phrase, like “UP – YOU!” (room breaks into laughter) You know what I mean, come on! We love taking the piss out of those.

Enrico: Maybe out of a hundred, they can use one.

Francis: When we were in Seattle, they had us standing between two rubber numbers. Enrico just grabbed them and put his legs around them.

Enrico: The stuff that I like, nobody else does. My life is a blooper reel – you’re right, man.

Teddy: Some of the stuff we were doing yesterday in Boston for the affiliate was hysterical. Francis had done the red-eye, he just rolls up and [says monotone and drowsy] “Yeah, watch UPN on 38.”

Enrico: Francis doesn’t do anything to hide it.

Teddy: He was like, “Hey! I feel like hell.” Every time he did it, he was like “I’m Weevil. Watch UPN on 38.” Somebody in the back was yelling, “Add a motherfucker to it!” Like, “I’m Weevil, motherfucker.”

I know that you all have been doing a tremendous amount of promotion for the show. With all the fan interaction – what has been the craziest or most-fulfilling moment?

Percy: The craziest moment happened to me and Teddy at the same time — some girl asked us for some lint out of our pockets. The best thing is the blessing of everybody. Having everybody come up to you and say the things that they say. I don’t believe that I received more than one negative comment in four cities.

Francis: Today was the coolest thing because [we announced that the show is coming back] — they know we’re coming back now. I felt a lot of people that were here today, they were relieved. And it really showed that these people supported us – true hardcore Veronica Mars fans supported us.

Enrico: The craziest? When a fan asked Percy to kiss Francis and he did. (entire room breaks up into laughter)

Francis: The truth is, he didn’t even ask, he just did it.

Enrico: Yeah, he just did it… There’s not craziness, per se, there’s just fans that get so excited and they start to shake. When I see that, I’m sort of in awe of the effect [that we have] – it’s hard to believe because we’re constantly being reminded that there’s an audience and when we’re in a situation like this, and you see how nervous they get – it’s like, wow. I really didn’t expect the turnout in New York. My bet was that a lot of people were going to be looky-loos, that happened to be in Macy’s and wanted to know what we were all about, but I was so wrong and I was really taken by that.

Kristen Bell (Veronica Mars): I think the most fulfilling moments are the craziest moments because in the beginning you’re thinking “whoa” and then you realize how much effort people have put into it. Meaning you have given them something and you’ve shared something with them and I think that, television more so than any film actors and actresses, they’re in your home every night so it’s a comfortable thing. You’re there for dinner every night – you create relationships with these people without knowing it. It’s a strange thing, but you’re a part of their lives. I’ve been given Christmas gifts from kids and cards and long letters. I was given a big charcoal sketch of my face and jewelry.

I think one of the coolest things is also the intelligence of our fans – they way they write into our internet sites and how much effort they actually put in – I’ll make an appearance and within two hours, a clip from it is up on the internet. We have dedicated fans and that is the coolest and craziest thing about the show.

Teddy: I’m not witty – I’m not the witty one, remember, I’m Duncan. I’m the strong and silent type. No, no. The most fulfilling thing, like everybody said is getting to meet our audience because we’re so far removed from them in the process when we’re shooting in San Diego. We don’t have great ratings, but because we have such devotion in our fans that’s the reason that we’re around and why we’re here. Just to know that we can share that with them and just say thank you, thanks for being supportive that’s definitely the most fulfilling part of it. That people are really taking what we give them and that’s the best part of the whole thing.

The craziest thing is just being a working actor, I never thought I’d be here. And people – it’s crazy to think that you’re on the receiving end of all that love. It boggles my mind. When you stop and think, which we don’t have a lot of time to do, but when we actually do stop and think about it, it’s pretty amazing, it’s astounding.

Jason: I think the most joyful thing for me is seeing the fans and knowing that it brings them joy to watch the show – just the arts in general, I think, bring people up, and to see these guys and they’re happier than they were. You don’t see one sad person. [I ask] “how are you?” and they say “good” and they’re honestly good, you know? I’m just happy to bring them up.

Somebody had Francis and I make out a card saying “to the best lover I ever had” today, and it was for a man. So that was pretty crazy.

If you haven’t been watching Veronica Mars, what’s wrong with you? No, seriously. If it’s a time conflict with The Amazing Race or House, M.D., I understand, I do. Get yourself a second VCR or a dual-channel programmable DVR and tape both. Start reading recaps and settle in for a summer of re-runs that UPN will hopefully inundate us with. You’ll get to find out who killed Lilly Kane, and prepare yourself for the new, twisted mystery of next season.