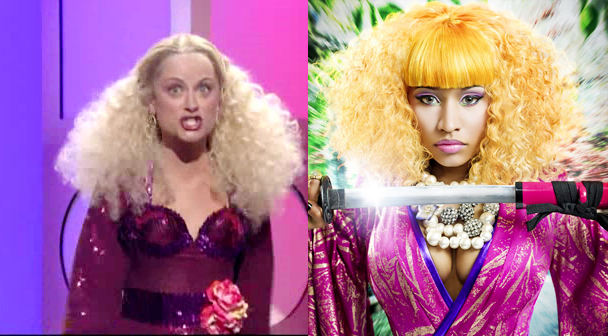 “Deep House Dish” is one of Saturday Night Live‘s more popular recurring sketches of the past few years. When it debuted in 2005, it was an absurd send-up of house, techno, and Euro-pop music that bore little resemblance to America’s pop scene. But in recent years, U.S. pop music has taken on a decidedly kooky new slant – and if you’ve ever thought that today’s pop stars look like something out of an SNL sketch, you might be right on the money. Roll her in glitter and douse her in whiskey, and Johansson’s a dead ringer for Ke$ha.

Or, at least, like she’s wearing a $20 Rihanna Halloween costume. Sure, it’s a bit of a stretch – but throw a couple parkas on the “Hello” singers and I totally see it. Tom Hanks’ douchebag rapper son has a new doppelganger, and he’s played by the star of The Green Lantern. Huh. Minaj has been accused of aping both Lady Gaga and Missy Elliott, but has anyone brought up that she’s clearly ripping off Amy Poehler here? Priorities, people! Honestly, if you told me this dress was originally from Gaga’s closet, I’d believe you without a moment’s hesitation. Apparently, half the audience at the Grammys, including Perry, should’ve been paying Poehler royalties. Come on!