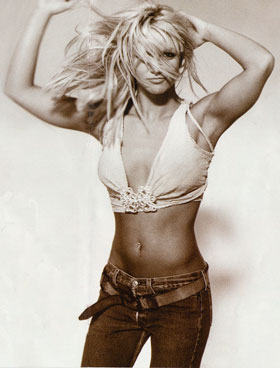 We popgurls are sort of dancing snobs. We’re pretty good at it, see, and we feel that we’re in it for all the right reasons. Which would be: we like to dance because it’s fun and it feels good. Generally speaking, we aren’t trolling the dance floors of the world looking for fresh meat to take home with us.

We are, however, observant. We’ve seen some pretty fucking funny things in our combined 106 years, and lots of them have been on the dance floor. Do you recognize yourself, your friends, that guy you hooked up with after a night of six vodkas and Red Bull? Here’s a handy guide to either help you tweak your current style, or be on the lookout for someone trying to weasel their way into your personal space.

My Girlfriend Made Me: This is the guy who has consented to dance because his girlfriend/girl-he-is-sleeping-with insisted that he come out. She probably threatened to go alone, and he feared some other man would put his grimy paws on his woman. She might also have pouted, whined, or begged, until he gave in and agreed to go, with the caveat that he must get really drunk before any dancing was done. This guy is characterized by the way he hovers around his date, possibly trying to corral her closer to him and away from other men. He’s probably half-assing it, moving either his feet back and forth from side to side, or his arms until they are half bent and then back down. You can easily spot him because won’t be moving both at the same time.

This Will Get Me Laid: This one thinks that girls will see how comfortable he is with himself, and will consequently want to sleep with him. He is not overt in his ribbed sweater and jeans. He will not grope or grind immediately. Instead, he will try very hard to look interested in the music, almost more than he is interested in you. He is probably a passable dancer. He can move his feet and arms at the same time, and might even be able to move his hips, a little. He will smile at you, and if you don’t keep your eyes closed or your head down, he will work his way over to you. If you encourage him, he’ll put his hands on your hips, and will probably ask your name. If you tell him, he’ll move closer, and grinding will commence. His rhythm will not match yours. But he’ll still ask you to go home with him after.

Ready To Go: Similar to the guy above, without the pretense. He is probably wearing a tight, ribbed t-shirt. He wants sex. He might slip up behind you when you aren’t looking and grind on your ass. He might slide his hands down your thighs. He doesn’t care what your name is, where you like to buy groceries, or what your sign is. Okay. Maybe your sign, but that’s the best pick-up line you’re going to get. If you allow him to grind for even two seconds, and then blow him off, he will still accuse you of leading him on. For him, dancing is all in the hips. He won’t be able to move his feet because he’s in your space, and he won’t be able to move his arms, because they’re all over you.

The Infiltrator: He thinks he’s being sneaky – he’s hoping that his t-shirt with unbuttoned shirt combo will throw you off – but you see him coming from a mile away. It’s because he dances for five minutes, takes two steps closer, dances for another five minutes and takes another two steps until he is standing between you and your friends. He’ll smile at all of you, and won’t, at first, make a commitment to any of you. He’ll wait to see if anyone shows interest, and if no one does, he’ll go for the weakest member of the group. The shy one. The one who dances with the least confidence. He’ll try to maneuver her away from everyone else. And then you’ll learn that the dancing (which is stilted, what with the shifty eyes and stopping and starting) was just a ploy to get a girl alone, and he might stop all together.

This Is The Best. Song!: Even more important than the girls, is the music. He wants to sing along. He probably has choreographed, in his head, the routine to “Footloose” and he will break out some of those fancy moves. If you also like to sing along (as I often do), he will claim you as his kin and will want to do duets.

Private Coed Dancer: Some of our favorite people out on the dance floor are the large coed groups (between six and ten people, usually, with no discernible couples). These people are usually so comfortable with each other that they can dance wildly, arms flinging everywhere, inserting ho-down maneuvers and ballet and hip-hop moves. They are always having the best time, and these boys are among the most fun to watch. They’re with people who accept them, and anything goes.

What Might Have Been: He’s bustin’ out the moves like it’s MTV. He’s wearing something Sean John or Tommy and he has nice sneakers. He has the right idea, but none of the skills. He has not grasped the fact that what looks good on Justin and P. Diddy does not look good on him. His moves are too big – in fact, he might hurt someone.

Dancing Machine: Sometimes confused with The Gay One, this guy can dance, and he really enjoys doing it. He has more than one move, is in complete control of his body parts, and can actually be pleasant for a nice girl to dance with. He might close his eyes when he’s really into the groove. He will respect your space. He will bring back extra water for you when he gets some for himself. But he’s not going to try to touch you, the most he’ll do is ask for your phone number at the end of the night because, after all, he needs a dance partner, too.

Let’s move on to the girls, shall we?

Cold As Ice: She is wearing a midriff-baring halter top and either a) thong-baring jeans, b) short skirt and bitch boots, c) leather pants with stiletto heels. She wants to be approached, because it proves she’s hot, but she doesn’t want to deal with the consequences. She wants to dance, because she thinks she’s sexy, but she doesn’t want to sweat. She’ll carry her drink onto the dance floor, but get enraged if someone spills it on her. She probably has a trendy little purse and glossy lips. She’d be a good dancer, if she wasn’t so uptight.

Tease: She’s probably also wearing something revealing. When the DJ plays Shakira, she will break into an impromptu belly dance, complete with cupping of her humble breasts. She spends a lot of time looking around the room and smiling. However. She’ll turn down every guy who approaches her, unless it is The One, who she has been scoping out since she walked in the door. Most likely, the scene she’s been creating is for him alone. But he’s probably too wasted or stupid to get that.

Look At Me! I’m a Fake Lesbian!: The bane of my existence. Seriously. There is nothing more tacky than two obviously straight women slithering all over each other in the hopes that men will flock to them. Who’re we kidding? Of course they will flock. They’re men.

This Should Be Fun: Not everyone is a good dancer, and not everyone has to be. But if you’re at a club, we would really rather you were having fun. This girl has been dragged onto the floor by her friends, but she has no rhythm. She might clap off the beat, even, and she looks so uncomfortable that someone needs to take her away immediately.

Calling Ms. Aguilera: She’s a genie in a bottle, and she wants you to let her out. She’s a Top 40 catalogue, and she watches a lot of MTV. She probably owns Darrin’s Dance Grooves (cough, cough), but she doesn’t believe in leaving those swank moves at home. Something isn’t quite right, though. Her popping doesn’t pop, her locking doesn’t lock. She’s probably half a step off the beat. But she gets points for trying.

Girls Just Wanna Have Fun: It happens far more often with women than men, but there are girls out there who like to get a little sassy with their friends, have some drinks, and dance for three hours straight until they are unflatteringly sweaty and exhausted. We popgurls, are among this ilk. We are probably wearing our favorite sexy boots or sandals, and whatever else makes us feel like a woman that day. Usually, girls who truly like to dance are confident about it. We are the ones smiling and laughing and spinning and getting lost in the music. We are also the ones glaring at you when you usurp our precious dancing space. (We, the popgurls, have also been known to break out choreographed moves, but only after drinks. Lots. Of drinks.)