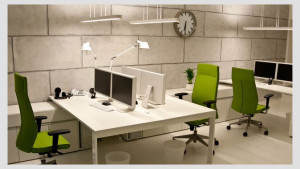 If you have a career that at all requires you to work in an office building, chances are pretty good that you’ll be required to share many of your spaces with co-workers. For instance, in my current office there is a big open area right outside my office door that houses hundreds of desks. There aren’t cube walls or any other separating device. Everyone is just right out in the open. The West Wing – or perhaps just West Wing fan fiction – has taught me to call this area The Bullpen.

Before I was promoted and got my office, I sat out in The Bullpen. In general, I didn’t mind the set up because I spend a lot of my day running around and not sitting at my desk. There were times, though, that it made me crazy to have so many people sitting so close. Sometimes I felt as if everyone in the building was listening to all my phone conversations. And, in the occasional moment where I really did need to buckle down and focus on work, I found myself easily distracted by all the people walking by or having conversations of their own.

Being a person who believes that everything has its place, it’s no surprise that sharing space with others would make me a little crazy. Not everyone, for instance, feels it’s necessary to arrange his or her desktop items at right angles to each other as well as the surface of the desk. Not everyone feels it’s necessary to return half-empty coffee cups to the kitchen once the liquid is cold…or even once the liquid has started to grow a fuzzy blue hat. Not everyone utilizes binders or folders to organize themselves.

And, even though I do all these things, I recognize that everyone isn’t going to be like me.

That said, I do feel that there are some things that are just common courtesy when it comes to sharing facilities in an office building. Here are just a few behaviors you might want to modify, if you find they apply to you:

I probably sound like a curmudgeon with all these nit-picky suggestions. At 29, you’re all going to start calling me Grandma Willa or something. But I propose that work sucks hard enough without the added annoyances that come from sharing your space with dozens (or hundreds) of other people every day. It makes me want to put signs on everyone’s desk – “Leaves coffee in bathroom,” “Half-assed utensil rinser” – on the off chance that they’d feel shame. I mean, if everyone just changed one nasty habit, think about how much more enjoyable it would be to spend your life at the office.